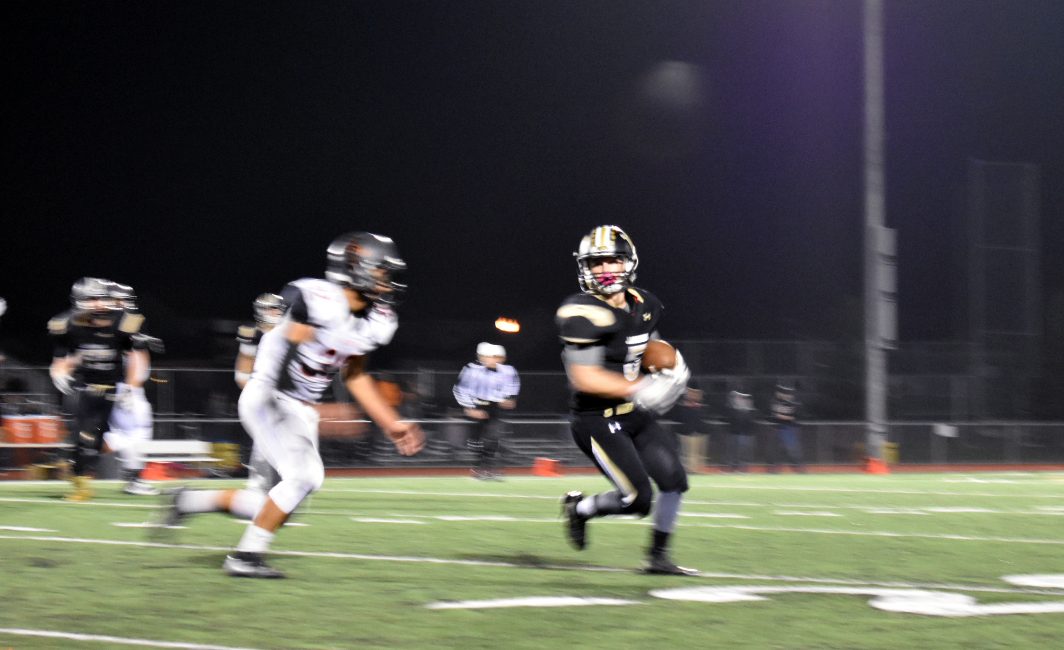 by Dale Watkins
After Windsor thumped Santa Rosa in the regular season 50-26, the two teams clashed once again, this time in the Division 2 playoffs: win or go home. But the #10 seed Panthers’ unbelievable 4th quarter scoring flurry came up literally inches short of the victory, as #2 Windsor outlasted the scare to prevail in overtime, 38-37.


Santa Rosa opened the game convincingly marching down the field on consecutive drives, but failed on 4th down both times for empty possessions. Windsor grabbed the lead with a Kobe Roman QB keeper at the goal-line, but the speedy Carlos Lemus would tie the game, taking the handoff and busting it to the outside, reaching for the pylon while being tackled to score with 7:58 left in the 2nd quarter.
But on the very first play from scrimmage on the ensuing Windsor drive, the always-dangerous Jackson Baughman would get the ball and race up the sideline, then cut back to the middle before he was off to the races; 60 yards to the house as it was now 14-7 Jaguars in a flash. Santa Rosa’s Emilio Campos would fumble on a running play, as Jorgen Sarganis scooped it up and sprinted 58 yards the other way before finally being tripped up by the quarterback, Isaiah Steele. The Jags had to settle for a 23-yard Olin Piotter field goal, pushing the lead to 17-7 at the half.
A poor punt gave Windsor tremendous field position at the 31-yard line. Jorgen Sarganis would then take a screen pass, fake out one man, and then reverse field, eluding numerous Panthers along the way for a crazy TD run. He just made the defense look silly trying to stop him. After Justin Fa’gaata forced and recovered a Panther fumble, David Escarcega blasted through a huge hole and went 18 yards untouched into the endzone on Windsor’s next drive, widening the margin to 31-7 with 8:09 left in the 4th quarter. It felt inevitable that the Panthers’ dream season was over.
But never underestimate the heart of a champion, as such was displayed by the Santa Rosa Panthers. Isaiah Steele would score on a keeper and convert the 2-point conversion to Banks. After a crucial stop on defense, Blake Thomas found the endzone on a 3-yard run, as Steele then rolled out to the right and threw back left to find Thomas again on the 2-point PAT, now 31-23 with less than three to play.
A Windsor three-and-out would give the Panthers possession back, with more than enough time for Steele to come in clutch. Steele reared back and fired downfield to Kalei Aukai who beat double coverage, as he scored on a 61-yard catch-and-run. Cassius Banks would take the handoff on the ensuing 2-point attempt and smash through the pile and through the goal-line to tie the ball-game.

Just an epic and improbable Panther comeback, roaring back from being down 31-7 in the 4th quarter as the Jaguar fans sat in disbelief, watching their insurmountable lead vanish. The Jaguars capitalized on the remaining 1:13 to set up Olin Piotter from 32 yards for the win. but he missed wide right on the field goal, which sent the game into overtime.
Kobe Roman would connect with Jackson Baughman as he scampered 5 yards in for the overtime’s first score. The Panthers got the ball, and Cassius Banks got the handoff and bullied his way in to make it 38-37. It was decision-time for head coach Denis Brunk, but after being successful on going for two all game, why not go for the win doing just that.
Everyone on their feet, watching in anticipation as the game came down to one play. Steele took the snap, faked the handoff one way, then gave it to Cassius Banks the other, trying to plunge his way in for the win. After several seconds of digging forward, Banks appeared to be stopped just inches short of the goal-line, and indeed he was. Windsor’s Bas Osborn led the incredible game-saving goal-line stand. But there was some controversy buzzing along the Santa Rosa sideline, as Denis Brunk asserted that an extra push got Banks across. Nevertheless, the Jags had lived to see another day, while the Panthers walked slowly off the field heartbroken.
Jackson Baughman and David Escarcega led the Jags’ stellar ground attack, as Baughman racked up 174 yards on 22 rushes, while Escarcega added 104. The electrifying Isaiah Steele would complete 28 of 46 passes for 439 yards and three touchdowns in his final game for Santa Rosa. This amazing season will be one Panther fans will surely remember for a long time.
Windsor advances to the Division 2 semi-finals, and will now host the winner of Concord and Granada next Saturday night.
Share
Copyright (c) 2016 Splash.
Theme by StylemixThemes.