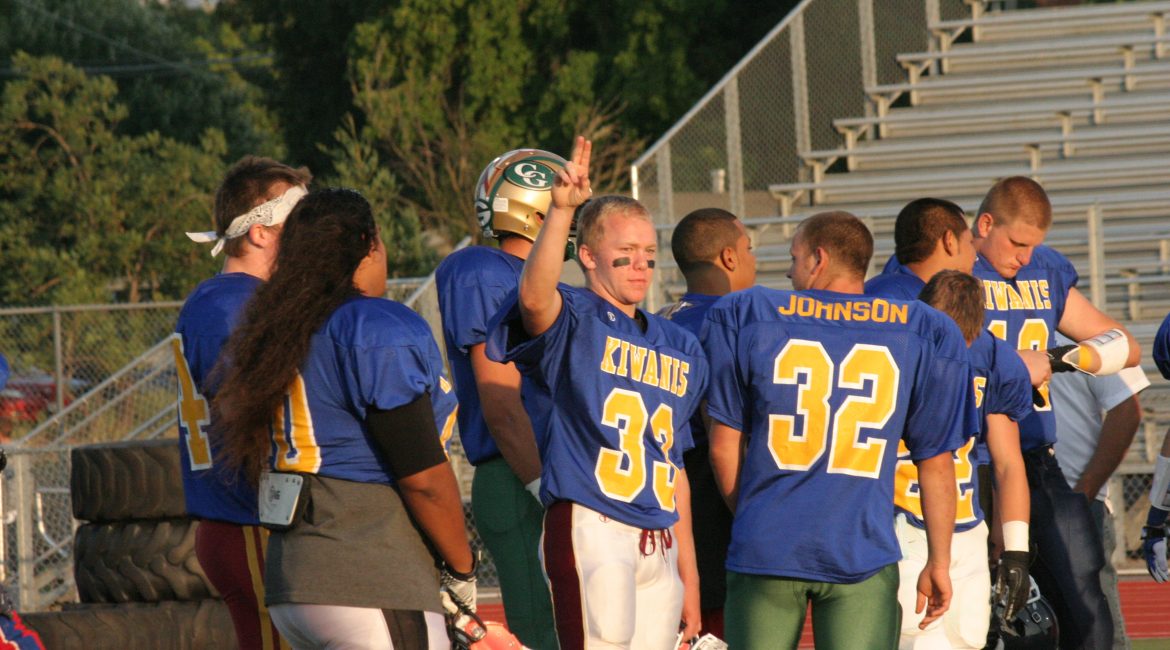 There wasn’t much suspense in the 40th Annual Kiwanis All Star Football game.  The North Bay League controlled things from the start and took a 26-0 win over the SCL.   The game was played Saturday Night at Montgomery High School on a cool breezy night that felt like the Weather Man was preparing everyone for the football season.

The Sonoma County League had the ball one time on the night when they weren’t behind.  That was on the game’s first possession when they received the opening kickoff.   They ran three running plays, gained four yards and then had to punt.  The punt was when the North Bay League started to take control of the game and they would not lose it.

For the most part the game is played with the same rules as a regular football game.   The exception to that is a punt or a field goal attempt; no contact can be made until the kick is made.  On that first punt, after misplaying it and then having it take a bad bounce inside the 10 yard line, Jacob Webb of Cardinal Newman returned it 42 yards into SCL territory.  It was a part of a monster start for Webb who returned two other first half punts for over 20 yards.   He also scored the first touchdown of the game seven plays after the first punt return, making a nice catch on a 25 yard pass from Rancho Cotate’s Michael Courchaine.

Courchaine showed why he was named Co-Player of the year in the NBL, throwing pinpoint passes most of the night.  He completed 10 of 16 for 119 yards for two touchdowns.  His second touchdown was a 13 yard toss to Trenton Wells of Windsor less than four minutes into the second quarter to make it 14-0.

The best player on the field most of the night was Santa Rosa running back Jahray Hayes.   He first started making an impact after the North Bay League had its 14-0 lead.   He rushed for 99 yards on nine carries and had a brilliant 16 yard touchdown run called back because of a penalty.  His 52 yard run set up the only touchdown of the second half.


It was the 40th annual Kiwanas Club All Star game and the 22nd between the NBL and SCL  The NBL win evens the series at 11-11.

The Juniors Division 2 tournament is off and running in Healdsburg.   Two games were played on Saturday, the tournament’s first day and there are teams from all over Northern California.

This is the last tournament for the Junior Division.

The local team from Mark West plays its first game today meeting Quito at 5 pm.   Quito is a Little League program from the San Jose Area.

There are seven team s in the double elimination tournament.   One other team will play its first game at 8 pm when Amador City West meets Visilia National.

Visilia National was involved in one of the two games that opened the tournament on Saturday, defeating Livermore 8-6.  In the other game Woodcreek defeated Feather River 13-3.