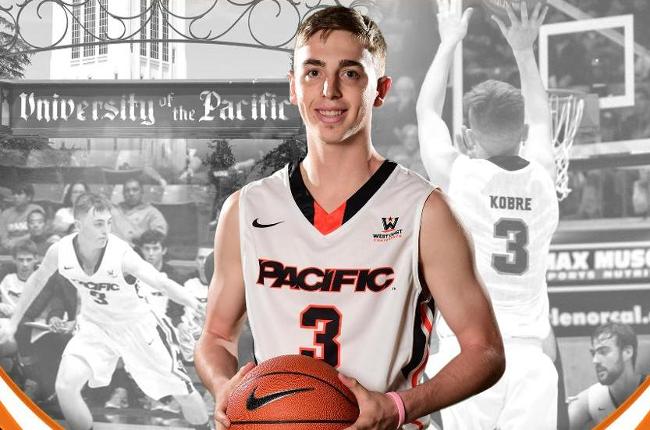 San Bruno, Calif. – With the completion of the 2015-16 regular season, the West Coast Conference has announced the players who have earned All-WCC honors for the year with the list including two of Pacific’s standouts. Representing the Tigers’ on the postseason team were seniorAlec Kobre and junior T.J. Wallace who each took home honorable mention honors. The two awards marked the first time since rejoining the conference that Pacific placed multiple players on the postseason team with Kobre earning his first award while Wallace picked up his second-straight honorable mention recognition.
In his final collegiate season, Kobre finished his senior season in record fashion as the sharpshooter from Santa Rosa became the Tigers’ first ever 50-40-90 performer in program history. In all, Kobre would cap his historic season shooting 50.5% from the floor, 44.1% from behind the arc, and 90.9% from the line. His 90.9% from the line was the top mark in the conference despite falling just short of the minimum attempts required to qualify. In all, Kobre finished the season as the team’s leading scorer averaging 13.2 points per game in 22 contests as he was the team’s top performer in 11 of those 22 games. Four times he would score 20+ points including netting 24 in his season debut against UC Irvine, the most for any Tiger in program history in their opening game of the season. He would score a career-best 25 against UW-Green Bay weeks later when he poured in 12 points in just :50 seconds in the final minute of the game. Kobre would finish his career tied for 10th all-time in three-point shooting, draining 105 despite playing just two seasons in the Orange and Black.
Joining his backcourt mate on the All-WCC honorable mention team was Wallace who spent the season guiding the Tigers as Pacific’s captain. Starting in 27 contests on the year, Wallace finished third on the team in scoring at 10.8 points per game while finishing second in rebounding at 5.3 rebounds per game. He was third on the team in assists with 2.4 per game while finishing first on the team in steals per game at 1.2 which placed him ninth in the WCC in thievery. Four times on the year Wallace led the team in scoring, but more impressively, from his guard spot, he led the team in rebounding in 12 different contests. He scored in double figures 13 times on the year, including a season-high 22 points against Pepperdine on Jan. 7.
“I am incredibly proud of both Alec and T.J.,” said head coach Mike Burns. “They are both incredibly deserving of the recognition. They are great players, but more importantly, they are even better young men.”