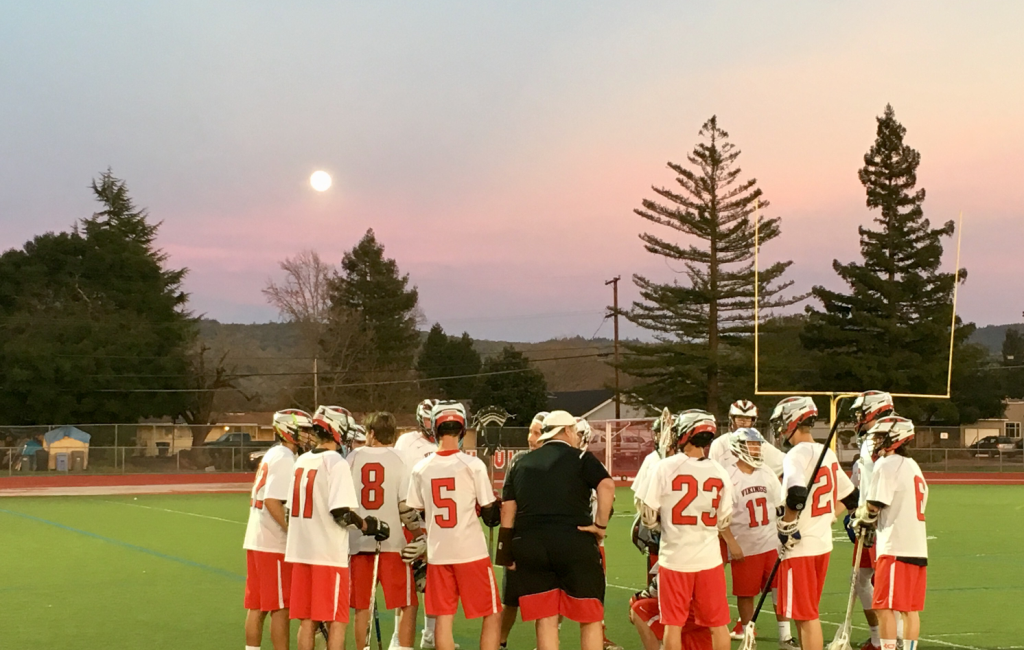 By Bruce Meadows
The North Coast Section lacrosse playoffs concluded this past weekend.
In Division I boys, Casa Grande – undefeated in North Bay League play – fell in the first round to Amador Valley, 17-10. De La Salle ended up as section champs.
Petaluma dropped its Division II first-round match to St. Mary’s, 9-8, with Campolindo winding up with the first-place trophy. 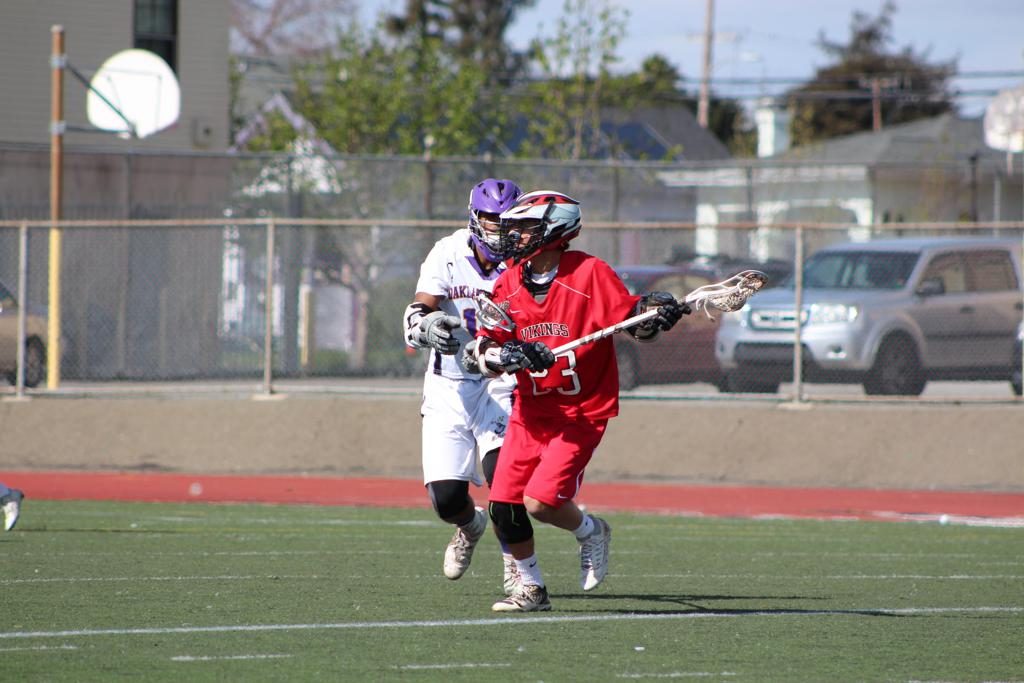 In girls’ lacrosse, Sonoma Academy lost its Division II first-round match to Christian Brothers, 14-10, while Windsor fell to Lick-Wilmerding, 11-3. Cardinal Newman, which received a first-round bye, lost in its second-round match to Branson, 7-6. Campolindo claimed the title.
So how did schools from the Santa Rosa High School District fare? They didn’t, because for a variety of reasons, boys’ and girls’ lacrosse is not offered at any of the five district schools – Elsie Allen, Piner, Montgomery, Santa Rosa or Maria Carrillo.
This has and will continue to be a bone of contention for lacrosse enthusiasts such as Mike Volatile, assistant coach and president of the Santa Rosa Lacrosse Club that features players from all over the city.
“It all comes down to money,” said Volatile, who deals with safety and hazardous waste materials for Sonoma County general services. “We understand the district’s financial problems”
Elizabeth Evans, curriculum and instruction coordinator for the district, is well aware of the ongoing and enthusiastic push to add lacrosse to the list of sports at the five Santa Rosa schools.
“We’ve had a lot of meetings with club leadership . . . they are committed to their sport,” Evans said. ‘We would like to see lacrosse in our district but our point is that we have make sure the sport is offered to all our schools, so they have the same opportunities.”
The fact the Santa Rosa District has five schools presents a relatively unique problem. Other districts with one or two high schools can address the issue with smaller financial obstacles.
“Windsor, Petaluma and Rancho Cotate faced a much different challenge,” Volatile said.
Starting a boys’ and girls’ program at a single high school costs, most agree, about $25,000 with an additional $10,000 estimated to maintain the program, including equipment, coaches and referees. Some programs, such as Casa Grande, were reportedly started for less but many of the players apparently already had their own equipment.
“This is not the greatest time for us financially,” Evans explained.
Montgomery and Maria Carrillo players make up the largest share of SRLC players with some additional players from Santa Rosa. The club has proposed that lacrosse might be phased in with Montgomery, possibly Maria Carrillo, fielding teams at first with Santa Rosa possibly in the mix.
“But the district would like us to come up with funding to cover Piner and Elsie Allen,” said Sheila Force, vice-president and team manager for SRLC’s varsity squad and the mother of two lacrosse-playing sons. “Santa Rosa, Montgomery and Maria Carrillo have booster programs that would probably be able to support programs.”
Volatile admits lacrosse boosters have not reached out to players and parents at Elsie Allen and Piner, an oversight he wants to change.
“We want to get all youth involved at younger ages,” said Volatile, who’s been trying to get lacrosse in the Santa Rosa schools for four years. “We don’t want our efforts to look like favoring one school over another.”
Evans said that given the district’s current position, if lacrosse is to be added in the near future, it would depend on local boosters coming up with enough money to allow all five schools to participate.
The cost appears to be a heavy lift, with $125,000 needed to get the program off the ground at all five schools, with additional funds needed to keep programs going.
“Phasing in” two schools while the other three compete in the North Bay League is apparently not an option right now.
Santa Rosa City Schools, which reportedly has not added a new sport (soccer) since 1973, is one of the few in the state that does not offer lacrosse, with 65 schools competing in the North Coast Section. For instance, the Marin County Athletic league added boys’ lacrosse in 2004 and added girls in 2005.
“It was a shock because we thought of lacrosse as a club sport,” said MCAL co-commissioner Susie Woodall. “What we did not know was that the lacrosse people had done their homework and had a rep or someone in each of the five districts or on the school board who supported the sport.”
Woodall, explaining that five schools are needed to start a league, noted that “some schools that said ‘never’ now have lacrosse. She added that Justin-Siena (Napa) started offering the sport a few years ago and Terra Linda and San Rafael are preparing to add girls.
She said the Tam High School District received funding from local lacrosse organizations to initially get its program going.
The North Bay League currently includes Cardinal Newman, Sonoma Academy, Petaluma, Windsor, Rancho Cotate and Casa Grande.
Force has no shortage of arguments for including lacrosse in the district sports menu.
“It’s the fastest-growing sport; great cross-training and conditioning for other sports; SRLC has youth programs to feed high schools; SRLC has expanded its advertising into the west Sonoma County to draw youth that feed into Piner and Elsie Allen, and U.S. Lacrosse offer ‘first-stick’ programs to schools and grants for start-up teams.”

She said that “phasing in” could work if, for example, the sport was offered at Montgomery and the SRLC program moved to Maria Carrillo. Presently the SRLC is centered at Montgomery and is called “Vikings.”
“We’ve offered to go to each school and talk to parents and boosters about helping fund the lacrosse program,” said Force. “But if we can’t phase in the sport, it could be a deal-breaker.”
“We’ve had a number of meetings with the district, but we gave up on having Lacrosse this year,” said Volatile. Both sides are trying to figure out what all is needed to get this accomplished.
He added that “the board wants to feel confident the sport will sustain itself, that it’s not a flash in the pan. But we look at the stats that show the sport continues to grow . . . our club now has seven teams, from 10s to 18s and interest from pre-high school players is increasing.”
But for now, SRLC will continue to be a club team, playing home games at Montgomery and hitting the road to places like Sacramento, Chico and beyond for away matches.
Evans said the last meeting was Feb, 2, with representatives of lacrosse club leadership and the SRCS district office, explaining “at the meeting it was discussed the importance of providing sports opportunities to all SRCS students equitably and ways that goal could be achieved.”
Maria Carrillo student Jacob Herbstman, quoted in a December 12, 2015 Press Democrat article, said “it’s a pride thing . . . it’s more fun to play lacrosse for your school and a little more personal than the club where several schools compete on the same team.”
The young man makes a valid point, as do club boosters. But then so does the district in what seems like an effort to be fair to all.
The Santa Rosa Lacrosse club is working hard to raise the $125,000 needed.
Hopefully the community can come to gether to make it happen for the kids.
Any and all help finacially or otherwise would be gladly appreciated.
To contact an SRLC representative, email Volatile at mvolatile@sbcglobal.net or Force at sforce@smithdollar.com