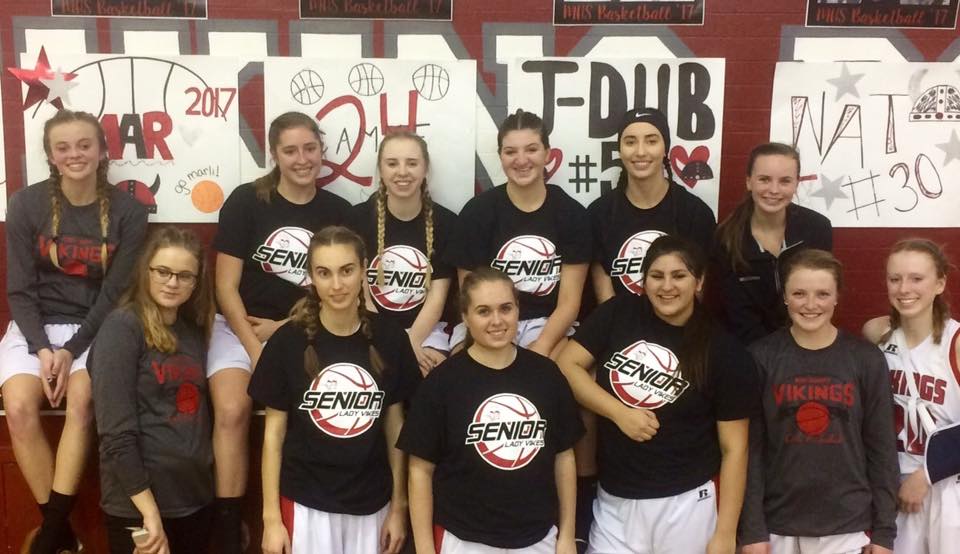 After the Montgomery girls squeaked by Santa Rosa with a 55-53 win in their first meeting on January 20th, the now 2nd and 3rd-place teams would clash again, but this time in the Viking Dome, Thursday night. On the final

day of league play, the stakes were higher than before, with the winner hosting the other team next week in the NBL tournament. It was the Vikings, though, that would snatch momentum late in the 2nd quarter on, along with cashing in at the free throw line ultimately resulting in a 58-52 victory.
Santa Rosa jumped out to a 17-6 first quarter lead, fueled primarily by a pair of Ally McCulloch 3-pointers, as well as Kamaren Codding and Princess Tufele each scoring four in the period. Ivy Lea, however, would pull her Vikings back with a huge corner 3 to beat the clock; the score 17-11 Panthers at the end of one.
Star Viking forward Shayla Newman began to do work in the paint in the 2nd quarter with a pair of buckets over the 6’2” Kamaren Codding, including a beautiful skyhook with the left hand. Ivy Lea responded to a Tufele bucket with her own tough drive and finishing amidst traffic, plus the foul. The Vikings would hit seven straight field goals in the latter half of the 2nd quarter; Julia Watson firing and nailing a stare-down 3-pointer, as well as Trinity Hawkins cherry-picking for the wide-open layup beating the halftime buzzer. The Panthers’ large lead had just evaporated progressively throughout the period, finding themselves trailing at the half, 31-29.
Panther do-it-all superstar Emily Codding was surprisingly held to just 3 points in the first half. Codding and Ally McCulloch, the team’s two top seniors, dealt with foul trouble, each accumulating three fouls. Montgomery went on a 7-0 run to kick off the 3rd quarter, but Codding, who leads her team  in all five major statistical categories, started to find a groove in the 3rd with a pair of scores inside and an emphatic block on a Viking layup attempt. Codding, a D1 recruit who will play at St. Mary’s College next year,  then drilled a deep straightaway 3-pointer to cut into the lead after three quarters, now just a 46-42 Viking lead.
Monty’s Marli Dykstra’s 3-point attempt took a heavy bounce off the rim up onto the top of the backboard, before dropping through. Santa Rosa fans reacted in outrage, insisting that it was out-of-bounds. Shayla Newman then stole the ensuing inbounds pass and put it up and in to inflate the lead to 52-44. Kamaren Codding’s big 3-point make, as well as Emily’s coast-to-coast layup off the rebound clawed the Panthers to within two; now 54-52 Vikings with 1:13 left.
Perhaps the biggest back-breaker for the Panthers came when Princess Tufele drove through two defenders and had an open layup with the off-hand, but she left it short, as the rebound bounced down to the Vikings’ Julia Watson. That shot would have tied the game, but instead, Ally McCulloch fouled out on the intentional foul, as Watson nailed two free throws on the other end. Emily Codding was then fouled with under a minute to go and was put on the line, but she missed the front-end of the 1-and-1. Ivy Lea’s two made free throws, followed by a Codding heave at the buzzer, would solidify the Viking victory.
Shayla Newman, who dropped 27 in the first meeting, led her Vikings with 25 points to go along with 11 rebounds. The junior displayed an array of nice fakes and up-and-under’s to free herself for open shots in the paint.

Emily Codding would register a double-double with 15 points on just 6 of 17 shooting, with 18 rebounds and two blocks. Princess Tufele followed with 11 points, and Kamaran Codding with 10. Santa Rosa as a team would shoot 34% from the field to the Vikings’ 40%. Turnovers favored the Panthers, only having 12 to the Vikings’ 15. Santa Rosa registered seven blocks for the game.
Montgomery secures 2nd place in the North Bay League, finishing with a 11-3 league record, and 21-5 overall. On the other hand, Santa Rosa drops to 9-5 in league, and 12-14 overall. The two league rivals will meet again next Tuesday at Montgomery in the NBL tournament, with the winner (presumably) playing 14-0 Cardinal Newman.