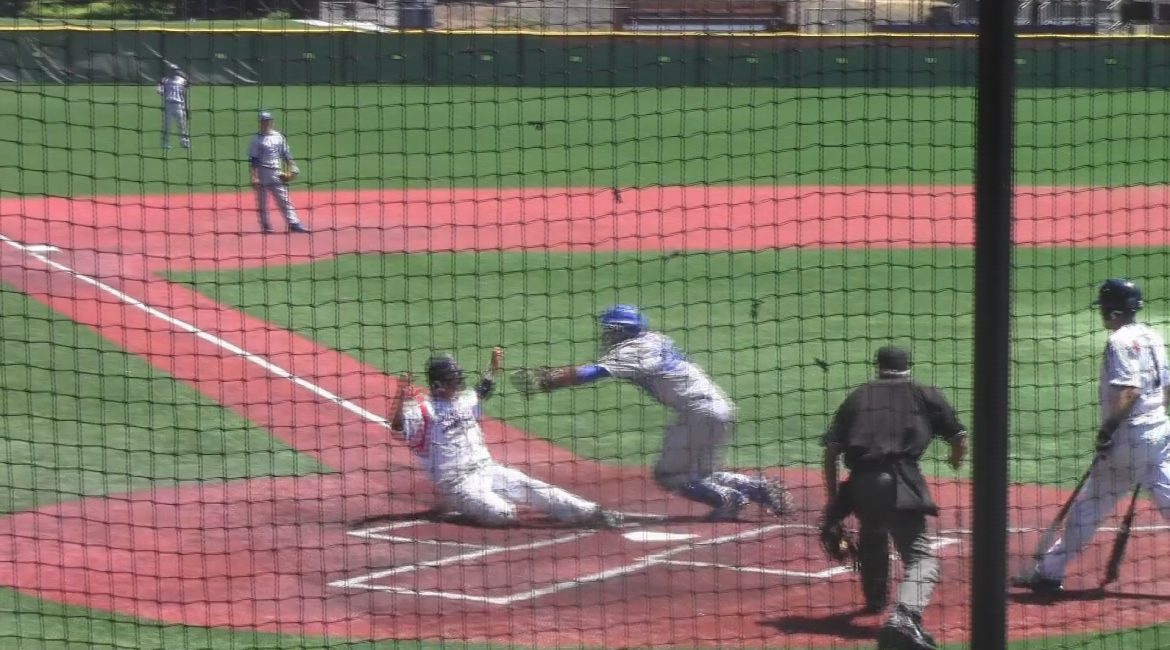 Both the SRJC and SSU are hoping to be playing a game Sunday at 11am.  If either or both do, they will only be halfway done with what they need to do to accomplish the weekend goal.  Both teams need two wins on Saturday and Sunday to win the playoff tournament they are in.

SRJC was up first and lost to Cypress 7-1 in the opening round of the State Final Four.  SRJC had eleven hits, but could only get across a second inning run.  Nico Filice hit a single, which drove in Stephen McElroy who had tripled, which was part of a three hit day.

After that, SRJC couldn’t come up with the clutch hit leaving ten men on base.   Cypress, who also had ten hits, didn’t have that problem.  Sam Tolleson hit a two out, two run single in the fifth, which broke a 1-1 tie.  That was followed by a four run sixth which put things away.

Later in the day it was Sonoma State’s turn.  They gave up two unearned runs in the second and third and lost to Grand Canyon 6-2 in its second round of the NCAA Division 2 Western Regionals.

Devon Zenn kept his hot regional going scoring both of SSU runs.   In the two games, Zenn is 3 of 7 with five RBI, walked once and scored two runs.

It is the same order, SRJC first and then Sonoma State.

At 10 am SRJC meets Feather River in Elimination Game No. 1

Sonoma State plays its Elimination Game No. 1 at 3 pm against Cal State Monterey, the regular season champion of the CCAA.   They stopped another Cal State LA-Sonoma State matchup by eliminating them 8-1 on Friday.

Sonoma State was swept by Monterey Bay in a four game series in early April.  In the opening game of the CCAA Post Season Tournament SSU took a 4-0 win.  In the last rankings, Monterey Bay was ranked seventh in the nation and they are the No. 1 seed of this regional.

If things work out, the next action would be at 6 pm when SRJC would meet the winner of the Fullerton-Cypress game, which is being played at 2 pm.

Fullerton defeated Feather River 9-1 in the opening day’s second game.  The winner of that game advances to Sunday and would have to be beaten twice.

If things really work out, SSU would take the field about an hour into SRJC’s second game.   They would meet the loser of the Chico State-Grand Canyon winner which goes at 11 am.  The winner of that game gets to Sunday and would have to be beaten twice.

The next loss for SRJC or SSU ends its season.

The NBL Baseball, along with the SCL Baseball and Softball Post Season Tournament,s had its championship games, with two of the three regular season champions pulling off the double.

Petaluma is 12-12 on the season and will be a little anxious when the North Coast Section playoffs are announced on Sunday as they are very much a bubble team for a Division 2 playoff spot..

No such worries for Casa Grande baseball and Petaluma softball.  Both won its post season championship game and look to be a No. 1 seed. Both won kind of games that were very familiar to how its season has gone.

That means Casa Grande rallied to win a one run game, defeating Cardinal Newman 2-1.   They won despite only having three hits.   The Gauchos scored both the runs in the fifth after Cardinal Newman had taken a 1-0 lead in the fourth.  Both runs were unearned and both came in a bases loaded walks.

Casa Grande is 24-2 on the season and looks solid for a No. 1 seed in the Division 2 playoffs.

Cardinal Newman drops to 14-12 and should get a home game in the first round.

Casa Grande won three of four from Cardinal Newman this season, all three wins by one run.

Meanwhile the Petaluma Softball Team had a familiar dominating score in its championship game with a 9-2 win over Analy.   Petaluma has won 24 straight and outscored SCL opponents in the league race 130-5 and in the two game post season tournament 22-2.

This game did have a key moment.  After falling behind 6-0 Analy scored two in the fifth and looked like they were going to cut into even more in the sixth.   They had the bases loaded and no outs but failed to score.  Petaluma then added insurance with a three run sixth.

Petaluma should get a No. 1 seed in the NCS Division 2 playoffs on Sunday.

Analy is probably feeling good that they don’t have to worry about Petaluma anymore.  They were 0-3 against Petaluma, 18-4 against everyone else.

Analy is in Division 3 as is Sonoma Valley.  Both teams should get first round home games.

NOT ONLY BASEBALL AND SOFTBALL

Saturday is more than College Baseball.

It will be the second day for the NCS Swimming Meet in Concord.   Analy has swimmers in nine events (four boys and five girls).   The finals begin at 10 am.

It is also a big track and field day with two major meets being held in Santa Rosa.

The Redwood Empire Tournament for the Large Schools is being run at Santa Rosa High School starting at 9 am.  This is a tournament for basically the part of the NCS that is west of the Richmond Bridge and includes the NBL and SCL.

Meanwhile the Small School version is being run at Montgomery High School and begins at 10 am.   This includes the Coast Mountain Conference, which would be more familiar to most fans to call it the NCL world.

Next week the North Coast Section combines things with a meet at UC Berkeley.