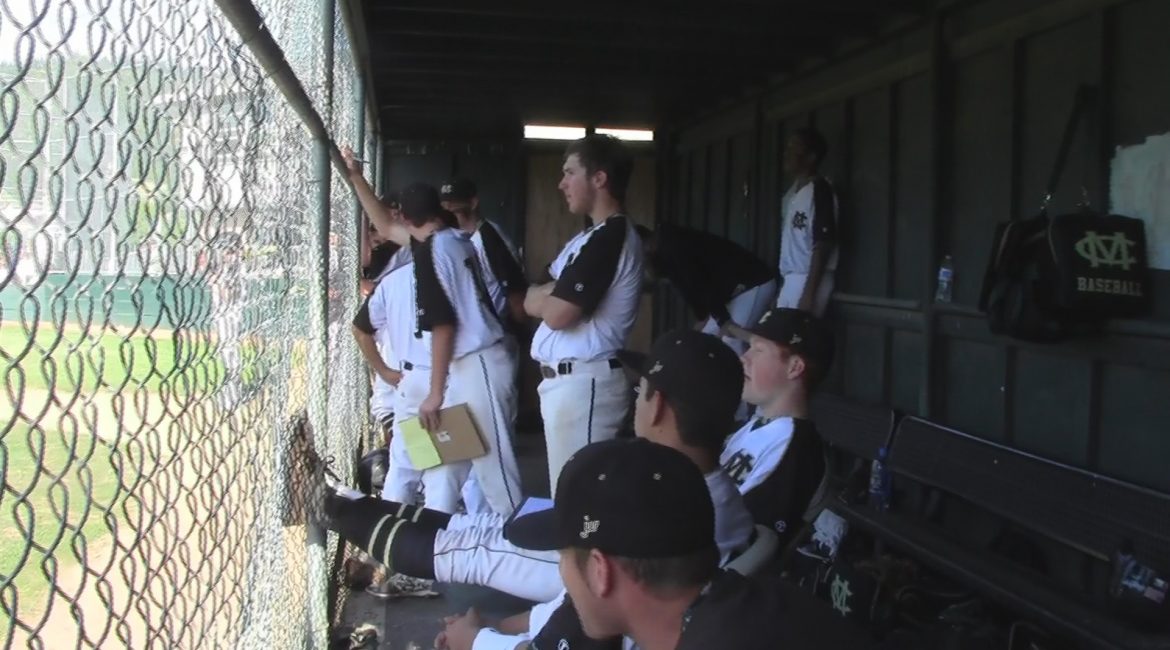 As the regular season ended, with the championships decided,  the suspense in the NBL and SCL baseball races was whether the champions would finish undefeated in league play.  This is a rare thing that doesn’t happen very often.

Actually, it may have never happened in the NBL.  It hasn’t happen in the Max Preps era, although a few teams have come close, including last season when Casa Grande lost its only game with two to go.   Two years ago, Cardinal Newman lost its only league game with three games to go.

That Cardinal Newman loss was to Maria Carrillo.   They had a chance to get some revenge for that team by stopping Maria Carrillo from the undefeated league season.

The suspense for that didn’t last long.  After giving up two in the top of the first, Maria Carrillo, a team whose character has been made up of the big inning, had one of its biggest sending thirteen men to the plate in the bottom of the inning, scoring nine times on its way to a 13-3 win.

Maria Carrillo had eight hits in the inning, all singles.   Four were in a row and drove in at least one run, with Jo Byrum driving two home during the streak.

Keith Wallach didn’t have an official at bat in the inning, but did have two sacrifices.   The first one was on a bunt which was the first out on the inning.  By the time he batted ten minutes later, the inning had gotten out of control and he hit a sacrifice fly to make it 7-0.   Andrew Vaughn followed with his second hit of the inning, a two run single to finish the scoring in the big inning.   His first hit started the scoring.

The rest of the game was a countdown to the undefeated league season.   It was also a countdown for the Pumas to finish off the regular season with a 19 game winning streak and a 22-2 record.

Next up is the post season, which starts with the North Bay League Post Season Tournament on Wednesday.   Maria Carrillo will host last year’s champion Casa Grande.   The other first round game is Cardinal Newman at Montgomery.

While it can be hard looking for history in high school baseball, like undefeated league seasons, it is pretty easy to find out the last one in the Sonoma County League.   That is because it happened last year, with Analy pulling off the trick.   Here they were with an attempt to do it again and they were successful, edging Healdsburg 1-0.

It is ironic that they wrapped up the perfect league season with the 1-0 win.  It was a 1-0 win over Petaluma that gave them control of the SCL race.    That game went 15 innings and of course, was the second marathon between the two teams.   The win over Healdsburg went the regulation seven.

Evan, who pitched the first nine in the win over Petaluma, carried a one hitter into the seventh in this one.    After giving up a solid single to Benny Shakked, he was replace by Garrett ,who gave up a line shot to right to Alonzo Vasquez, a ball that was caught by Johnny Gomes, who then double off Shakked at first base.   He then got a strikeout to save the fourth win of the season for Evan.

The other similarity of the Petaluma win was that Garrett scored the run.    That was in the sixth when he led off with a single, which was Analy’s only hit of the game.    He scored without a hit, by stealing his team high 13th base of the season, going to third on a ground out and scoring on a wild pitch.

It was Analy’s 14th straight win and they end the regular season 20-4.

Like Maria Carrillo, up next is the post season tournament.   All the games for this tournament are at Arnold Field in Sonoma.   Tuesday, Analy will meet Piner, on Wednesday, it will be Petaluma against Sonoma Valley.   The championship game is on Friday.   All the games start at 7 pm.

NOT A GOOD START

The mindset for the SRJC baseball team has to be when something works, don’t change it.

For the second straight week and third time in two seasons the Bear Cubs have dropped the first game of a best of three series in the State Playoffs.   The last two times they were able win Game 2 and 3 to move on.

In Game one of this series, Cabrillo  scored all its runs in the eighth to take a 3-1 win.  Two of the three runs were unearned.

Game 2 of the best of three series is today at 1pm.   Game three, if necessary, is Sunday at noon.

The SRJC Softball team is faced with the same situation, as they lost the first game of their double elimination tournament to Sierra 21-8.    Sierra scored 10 in the first.  SRJC made it a game with a six run second.   It wasn’t a game for long as Sierra responded with six in the bottom of the inning.

SRJC will meet Fresno at 2 pm in an elimination game.   For SRJC to advance to next week, they need to win four straight games.