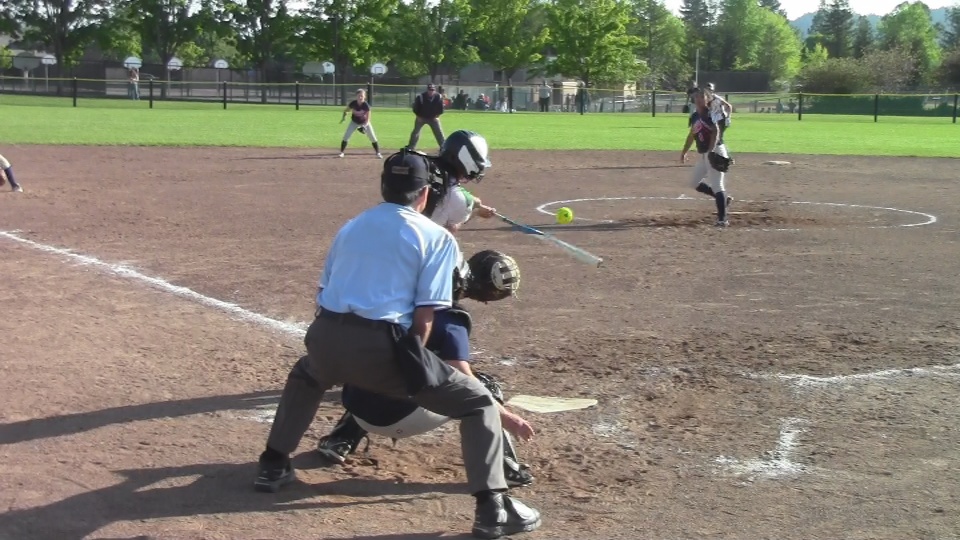 Just a week ago No. 2 Maria Carrillo looked like they were in trouble for a NBL Softball championship.
They were one out away from a loss to Rancho Cotate with first place at stake, then rallied for three runs to get a race changing 4-3 win.

Now they are on the verge of an NBL championship.

Shelby Holzworth and Mikaela Francis each hit two run homers to end a 3-0 week with an 11-3 win over Ukiah.  Not only that, they got some unexpected help and now have a commanding two game lead with three to go.

Holzworth hit her homer to get the game started on the right track in the first to open the scoring.  When Francis hit her shot in the fifth, Maria Carrillo took a 8-2 lead.

Maria Carrillo has won nine straight and is 16-5 on the year.   They are averaging over seven and a half runs a game and the win over Ukiah was the fifth time in six games they have scored in double figures.

The unexpected help came from Cardinal Newman.  Freshman Lexie Raasch pitched a three hitter as they took a 3-0 win over No. 3 Rancho Cotate.

Raasch is a symbol of this Cardinal Newman team that is very young.  She is one of three freshmen on the team.   They also have three sophomores, two of them brought in the runs.  Megan McConnell drove in one in the third and Sarah Holly added insurance with a two run single in the fifth which was part of a three hit game.

It was a fitting revenge for Cardinal Newman who started the season 8-1.   Then on April 9th they were the victim of a seventh inning rally as Rancho Cotate scored two for a 7-6 win.   Since then they lost  seven of eight, giving up double digits during a streak of four of five games.

It was Rancho Cotate’s first league shutout since March 23rd, 2010 when they were beaten by Montgomery 2-0.  That was 49 games ago.

Rancho Cotate did keep sole possession of second place thanks to No. 4 Santa Rosa losing to Casa Grande 4-0.  Courtney Ludlow pitched a complete game two hitter and Lisa Nadell drove in the first two runs of a four run sixth with a double.

The two teams are tied for third place in the league race.

The way they are dominating things it is easy to think No. 1 Petaluma has things wrapped up in the SCL Softball race.  The latest was a 6-0 win over Sonoma Valley in which Dana Thomsen pitched a three hit shutout to raise her record to 12-1.

Petaluma is now 18-1 and in nine SCL wins has outscored opponents 91-2.  It was the first time in six games they haven’t score in double figures.   The last time was on April 9th in a 3-1 win over Sonoma Valley.

Despite all those numbers there lead over Analy is still just one game after they beat Piner 11-0.  Analy is 8-1 in league play, Petaluma 9-0.  Analy’s only loss was 10-0 to Petaluma.  The two teams meet next Thursday at Analy.  There is one league game for both teams between then.

Before the league games get going again, Petaluma has a non-league game Saturday at home against Alhambra.  This is a big game come NCS seeding time.  It is a game between the two highest ranked teams in Division 2.  Alhambra is 15-1 on the season and in the second game of the season defeated Rancho Cotate 14-0.

The traffic jam for second place in the NBL Baseball race almost took an unexpected turn.  No. 5 Maria Carrillo almost took a brutal loss, but a four run seventh gave them a 5-3 win over Santa Rosa.  Clayton and Miles Andrews each drove in runs with a single and Santa Rosa committed two errors that scored the others.   The rally gave the win to Clayton Andrews.

The win pulls Maria Carrillo, at least momentarily, out of the four way tie for second in the NBL race.   The other three teams play today with Rancho Cotate hosting No. 1 Casa Grande, Montgomery hosting Ukiah and No. 4 Cardinal Newman traveling to Windsor.

Casa Grande, who is ranked No. 57 in the country, has already sewed up the NBL championship and is looking for its 21st straight win.

The SRJC baseball team has been sitting on that disappointing loss to end the regular season for a week.  They finally get back on the field to start the State Playoffs beginning the Best of 3 series with Los Medanos this afternoon at 2 pm at the JC.

SRJC is the No.1 ranked team in the state and the No. 1 seed in the Nor Cal playoffs.  They haven’t played in a week when they lost to Cosumnes River 2-0 which cost them a sole-championship in the Big 8 race.

Los Medanos has played since then winning a play in game 8-5 over Mission on Tuesday.  They had lost seven of nine going into the game and are 19-18 on the season.   SRJC  is 28-6-1 on the season.

The series will be finished on Saturday with game two starting at 11 am and if necessary Game Three right after.    The winner advances to the regionals, which is a four team double elimination next weekend.

The Sonoma State baseball team’s amazing run has got them into the national rankings.  A seven game winning streak, all over National Ranked teams gets them at No. 17 in a writer poll and tied for No. 16 in the coach’s poll.

Sonoma State finishes the regular season with a four game series at Cal State Domiquez Hills.   Up next are the League’s post season tournament next week and then probably the NCAA regionals.

The winning streak has had a major effect on both the CCAA regular season race and the national rankings.  The seven wins were over Cal State Los Angeles and Chico State.

When Sonoma State defeated Cal State Los Angeles they were ranked No. 12 in the country and are now out of the rankings.  Chico State was No. 6 and they dropped to No. 22.