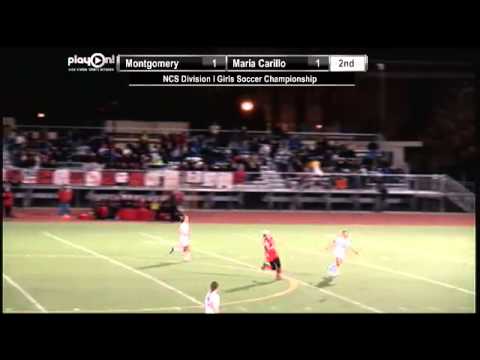 Two national powers will be meeting when they open the North Bay League Girls Soccer race on Saturday.

Okay, maybe national powers might be an over statement, but two teams ranked in the top twenty five are meeting.

The match up is No. 25 Montgomery at No. 4 Maria Carrillo.  The rankings are by FAB 50 National rankings.

Maria Carrillo Girls soccer team has been in the rankings all season and after spending late last week in Baltimore, Maryland, they strengthened that position.  The Puma Girls defeated No. 3 and tied No. 5 in the two games they played in Baltimore.

The team traveled cross country to play in the McDonogh Invitational, which is the name of a high school in Maryland and were the FAB 50 Preseason No. 1 team.  That is the team Maria Carrillo defeated on Friday with Brittany Lore scoring twice in a 4-3 win.

The next day they played to a 0-0 draw with No. 5 Our Lady of Good Counsel who is also from Maryland, so they went had a successful 1-0-1 record and yes if it seems a long way to go to play two soccer games, I would agree with you.

Maria Carrillo, who is also ranked No. 4 in the National Coaches Poll, is 3-0-1 on the season.  The Pumas have won two straight NCS Division 2 Fall championships and over the last three seasons is 61-2-1, with one of the losses to Casa Grande 2-0 in the 2010 NCS Championship game.

Montgomery wasn’t ranked in the Fab 50 poll until today.  They got there after a game on Friday when Natalie Vigil scored the game’s only goal in a 1-0 win over Alta of Utah, who at the time was ranked No. 10 in the country.  The win raises Montgomery’s record to 5-0 and gives them the No. 25 spot in the ranking.    The Vikings hasn’t given up a goal yet this year.

Alta, who has an annual game with Montgomery, dropped to No. 26.

The rest of the Girls in the NBL play its first league game on Friday as does the SCL Boys.

That is a smart move by the Montgomery and Maria Carrillo to schedule its game to not go up against Friday Night Lights.