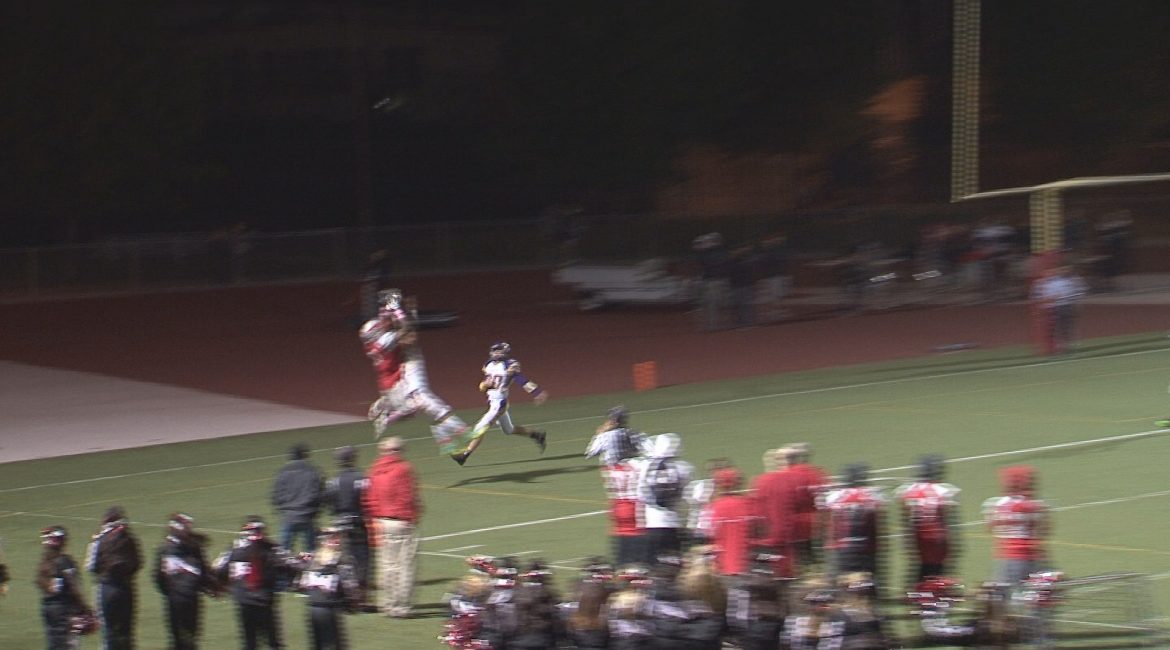 When Dean Haskins was hired as head football coach at Montgomery, a lot was made of him being football and baseball coach at the same time.

Gary Galloway must have been chuckling.

In the two sports combined St. Vincent won 31 league and nine NCS championships.  By the way, he also coached the basketball team from 1982-2006.  During that time they won eight league titles.

There is no report of what he does in his spare time.

The record for the most wins in a career is Bob Ladoucuer of DeLaSalle with 399.  The record most wins in Sonoma County History belongs to Jason Franci who won 232 games at Montgomery.

The win on Saturday sets up the NCL II/Bay Football League championship game when Calistoga travels to St. Vincent.   Calistoga goes into the game undefeated and has clinched a tie and a Championship pennant.

That was like the appetizer before the main course.

The Bear Cubs had the real meal when it comes to rallies. After three quarters on Saturday SRJC trailed DeAnza 31-14 before scoring three fourth quarter touchdowns to take a 35-31 win.

SRJC was unstoppable after that.  On the next drive K’lan Anderson, on his only carry of the day, scored from one yard out.  Anderson was the leading receiver with seven catches for 107 yards.

The winning score belong to Andre Davis who caught a 56 yard pass from David Sowards with 4:48.  The winning score was more run then pass, as Davis caught the ball at about the 40 and broke several tackles.

The win gives SRJC a 6-2 record overall and 3-1 in league.  SRJC is tied for second with San Francisco and San Mateo, one game behind first place and the State’s No. 1 ranked Butte.

The battle for second is how SRJC ends the season, including its last home game next Saturday Afternoon against San Francisco.

San Mateo fell into the second place tie by losing its first game of the season to No. 1 Butte 28-20 in a game that had the ball in scoring position late in the game.  San Mateo went into the game ranked No. 4 in the state.

San Francisco, who went into the week losing two of three, stayed in the second place tie with a 35-0 win over Foothill.

The fall playoffs are going to start on Wednesday with the first round of soccer.

The NCS soccer playoffs are different than most of the other playoffs, because they don’t include the East Bay who play their season during the winter months.   There are rumbles that the local soccer schedule may change its season to winter so everyone will have matching seasons.

Divisions 1 in both the boys and girls bracket are NBL and SCL heavy and Division 3 has a lot of the NCL world.

DIVISION 1 BOYS:   Montgomery, who won the title in 2010 and 2011, is the No. 1 seed and are the only team in the fifteen team bracket that get a first round bye.  Five of the teams are in the NBL, four of them in the SCL.

DIVISION 3 BOYS:  Defending champion Anderson Valley the No. 1 seed and get a first round bye

DIVISION 1 GIRLS:  Since they are ranked No. 2 in the country, it was safe to predict that two time defending champion Maria Carrillo would be the No. 1 seed.  Montgomery is No. 2 and Petaluma No. 3.  All three teams have first round byes.

DIVISION 3 GIRLS:  Sonoma Academy, who won the section from 2007 to 2009 and is 18-1 this year, is the No. 1 seed.  Defending champion Middletown is No. 2 with Cloverdale No. 3.  All three have a first round bye.  Roseland Prep and St. Vincent also got a first round bye and will meet in the second round.

All the teams with byes play on Saturday.  The rest of the playoffs get started on Wednesday.

The top nine is the exact same for the third straight week.  Actually the top ten is the same as last week.

Yes boring as that is we reveal the same and give a warning that next week when the regular season ends with be the last week of the YSN365.com Rankings for the 2013 football season.

No. 1 Casa Grande (9-0) (Last Week No. 1)…The Gauchos are one win away from first undefeated regular season in school history.   They are assured of a co-championship.  Go for the whole thing against Cardinal Newman on Friday.

No. 2 Analy (9-1)  (2)…A 23-13 loss to Miramonte cost the Tiger’s its second straight undefeated regular season.   The back to back SCL solo championships are the first two in school history.  Good scheduling.  The regular season is over and they have a BYE before going into the NCS playoffs.

No. 3 Montgomery (8-1) (3)…Sticks its tongue out at the Press Democrat for ranking them behind Cardinal Newman last week by taking an impressive win over Maria Carrillo.  Montgomery is back ahead of Cardinal Newman in the PD.    Now they are the strange position of needing Cardinal Newman’s help to get a NBL Championship Flag.  Of course, they have to take care of their own business at Windsor.

No. 4 Cardinal Newman (7-2) (4)…The Cardinals raised their streak to four straight games in which they have scored 40 points and they needed all of them in the win over Rancho Cotate.   Cardinal Newman hasn’t lost more than one league game since Paul Cronin took over as head coach in 2003.

No. 5 Middletown (8-1) (5)…Sewed up the NCL I championship.  They need a win to be solo champions and the probable No. 1 seed in the NCS Division 5 playoffs.

No. 6 Calistoga (8-0) (6)…Sewed up its first championship flag since 1997.  Now they go for the school’s first league championship since 1987 when they travel to St. Vincent on Saturday.

No. 7 Sonoma Valley (7-2) (7)…Since losing to San Marin and Analy, the Dragons have won five straight.  A win over Petaluma will give them the most regular season wins win 2004.

No. 9 Rancho Cotate (5-4) (9)…The loss to Cardinal Newman summed up the Cougars season in a nutshell.  They have been very good at times, not so good at other times.  Of the four teams they have lost to Cardinal Newman has the worst record at 7-2.

No. 10 Healdsburg (5-4) (10)…Had a bye since its one point win over Piner which should give them a home game in at least the first round of the NCS playoffs.  That is if they finish off the regular season with a win.