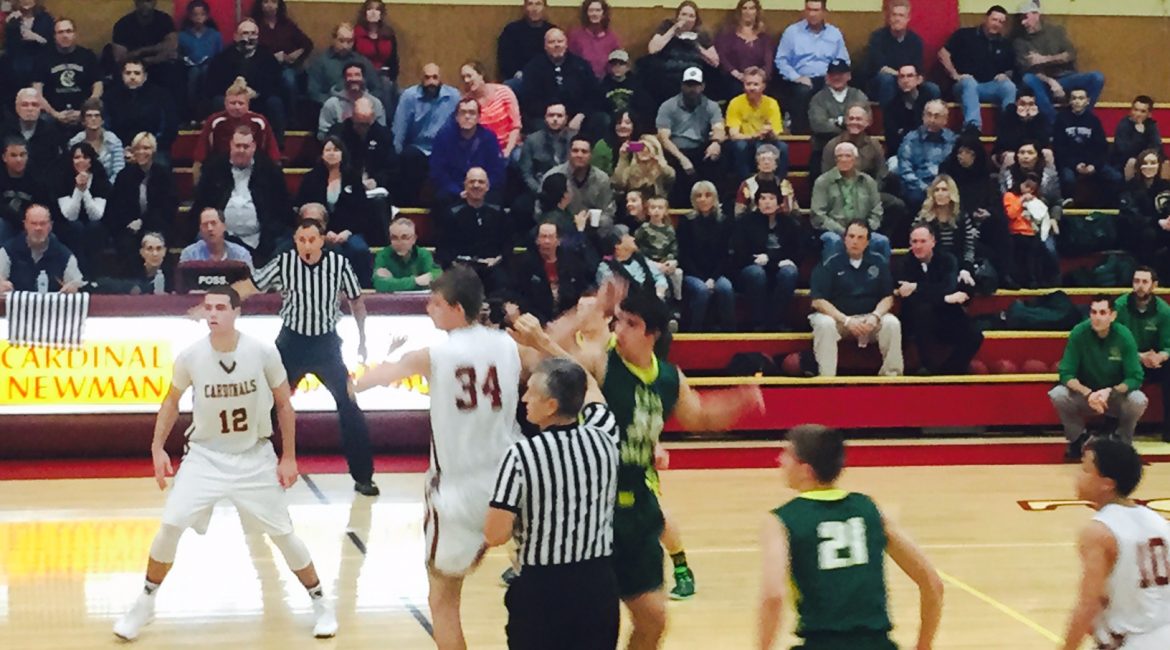 
I was at the Casa Grande-Cardinal Newman game and it was one of the most amazing finishes I have ever seen.  This is from someone who has seen many of amazing finishes between Cardinal Newman and Montgomery.
First of all, to get this out of the way, the game was not one of the best officiated games of the season.  It got to the point where almost every call by each team was being questioned, whether it was a good call or not.  I actually commented to whom was sitting next to me, ”Who is going toget the first technical?” I said it half joking, because it was late in the game and with how close the game was it appeared it would take something out of the ordinary to get T’d up.
Having said that, both teams had chances to win before the last few crazy seconds.  It wasn’t Cardinal Newman’s best shooting game, especially at the free throw line where they went 15 of 29 and they got there by hitting four their last five in the last four seconds of the game.
Cardinal Newman’s leading scorer Connor Rubattino was having one of his worst shooting games.  Going into the fourth quarter he had one three point shot and 12 points.  That changed in the fourth quarter and especially in the last minute.
Going into the fourth quarter it was a back and forth game.  A nine point run gave Casa Grande a 9-3 lead midway through the first quarter.  That would be Casa Grande’s biggest lead until there were three and a half minutes left in the game.
Cardinal Newman’s biggest lead was 27-20, which was late in the second quarter.  Casa Grande scored six straight to cut it to one and it was back and forth for the rest of the third quarter.  The last five minutes of the third quarter had four ties and a lead change.
It appeared, until the last thirty seconds, that the last tie or lead change would be 37-37 with 6:24 left.  Casa Grande then scored eight straight to make it 45-37 lead with 3:30 to go.  Rubattino then hit his second three pointer of the night to cut it to 45-40.  After Casa Grande went one of two from the line, Damian Wallace hit a three to cut it to 46-43.
There was 2:45 left and it looked like it was setting up for a thrilling finish.
Little did we know how thrilling.
Casa Grande looked like they spoiled the thrilling finish by scoring six straight to make it 52-43, with 1:46 left.  This is where Casa Grande would like to have things back.  Twice they had the ball and instead of trying to eat some time, they threw up quick shots.
Still with :40 left, after Scotty Cole hit two free throws, Casa Grande held a 54-48 lead.  I wish I could tell you to the exact timing of what happened next.  It all happened so fast.  As I usually do, I was posting the scores to the YSN365.com page. I was typing the 54-48 score, figuring as I was typing it, the game was basically over.  By the time I had  it typed the lead was almost gone.
With about :25 seconds left, Jamon Roberts put back in a missed shot to make it 54-50.  That is when things really got crazy.  I was still trying to post the score and write notes at the same time and somehow Cardinal Newman got the ball back and Rubattino hit a three to cut it to 54-53 and now the clock was under :15.
I gave up posting the score for obvious reasons.
About then Casa Grande was frantically trying to call a time out, but that wasn’t acknowledged by the refs . There was another steal and once again Rubattino hit a three point shot and this time he was fouled and unbelievably Cardinal Newman had a 56-54 lead with 3.8 left..  Casa Grande was furious that they hadn’t gotten the time out and that was when a technical showed up.
Whether the technical was justified or not is hard to say.  There is no doubt that there were bigger outburst over calls throughout the game.  Maybe the wrong word was said.  There is also no doubt that the Casa Grande bench was pleading for a time out.  The action was happening on the other end of the court and to expect the officials to see the call or hear a time out and watch the action with a near packed crowd going crazy is a lot to ask.  I have seen that several times in my years of covering high school basketball, when the coaches are trying to call time outs, but don’t get it because the officials don’t see the signal because they are watching the action, which they are supposed to do.  I was told by a couple of Casa Grande followers after the game that a couple of players were also trying to call the time out.  I can’t say I saw that and whether that was frustration or not, well let’s say it was a frustrating time to be a Casa Grande supporter.  I am not going to say I saw everything during that last twenty five second, as the score went from 54-48 Casa Grande to 56-54 Cardinal Newman.
Rubattino hit two of the three free throws.  He got two for the technical and one for being fouled on the shot.  Because of the technical, Cardinal Newman got the ball and Casa Grande was forced to foul.  Wallace hit two free throws to make it the final 60-54.  Cardinal Newman scored 12 points in the last thirty seconds of the game.
Rubbatino ended up with a game high 29 points.  He scored nearly half of that in the last 3:30 of the game.  He hit four three point shots, three of them in the last minute, along with the free throws after the technical.  He was the only player for Cardinal Newman to score in double figures.

Will Crain scored 14 for Casa Grande, seven of those in the fourth quarter.  He got all those points despite fouling out with 2:06 left. A total of 17 players combined scored for both teams.
That wasn’t all the drama in the North Bay League on this night.  On the other end of town, Santa Rosa was at Montgomery.  Now on the surface, that isn’t a game that is going to get the blood pumping.
One of my best contacts is from Montgomery.  He has been my Viking reporter for a few years.  He sent me at least a dozen updates in this game.  The updates started out normal enough.  As usual, I got two in the first half, one after the first quarter which Montgomery led 12-6 and one at the half, which Santa Rosa led 24-23.
Then, the updates got fast and furious, as it looked like the upset might happen. Santa Rosa had a 36-32 lead after three and it was 43-40 with 1:45 left.  Montgomery scored the last eight points of the game to avoid the upset.
Michael Septimo, who is back playing his first game since late December, hit four free throws in the last :30 seconds and scored a game high 15.  Montgomery made eleven free throws in the last quarter, six of those in the last thirty seconds.
It capped off quite a night in the NBL, and to think, up next on the Wednesday part of the schedule is Montgomery at Cardinal Newman.
NORTH BAY LEAGUE
No. 1 Cardinal Newman 60 No. 2 Casa Grande 54
No. 3 Montgomery 48 Santa Rosa 43
Windsor 70 Maria Carrillo 63
Ukiah 77 Rancho Cotate 47
In another thrilling game Windsor defeated Maria Carrillo.  Gabe Knight scored 32 for Windsor.
Ukiah had a big second quarter and pulled away from Rancho Cotate.  Sammy Mora was one of three for Ukiah in double figures with 16 points.
LEAGUE OVERVIEW:
The league is at the halfway mark with Casa Grande and Cardinal Newman tied for first one game ahead of Montgomery and Windsor. The suspense, if this is possible, goes up a notch on Wednesday with Montgomery at Cardinal Newman. Casa Grande is at Santa Rosa and Windsor goes to Ukiah.
TUESDAY SCHEDULE
BOYS
NCL I
Middletown at No. 7 Willits
Clear Lake at No. 9 Cloverdale
St. Helena at Kelseyville
Lower Lake at Fort Bragg
LEAGUE OVERVIEW: None of the league leaders meet. Willits and Cloverdale are tied for first with Kelseyville one game back. Middletown and Lower Lake are two games back.
GIRLS
NORTH BAY LEAGUE
No. 8 Montgomery at No. 1 Cardinal Newman
YSN365 LIVE BROADCAST
Casa Grande at No. 2 Santa Rosa
No. 5 Windsor at No. 9 Ukiah
Rancho Cotate at Maria Carrillo
LEAGUE OVERVIEW: After the first half dominated by Cardinal Newman, the second half begins.  Still, Cardinal Newman’s lead is only one game over Santa Rosa.  The league goes right down the line, with all teams one game behind the next.  Windsor is in third, Montgomery in fourth and Ukiah fifth.  The Windsor-Ukiah game is a big one for the fourth and final spot of the NBL post season tournament.
SONOMA COUNTY LEAGUE
No. 3 Sonoma Valley at No. 6 Petaluma
Piner at No. 4 Analy
Healdsburg at El Molino
Elsie Allen Bye
LEAGUE OVERVIEW: It’s a do or die game for Petaluma, if they are going to be in the league championship hunt. Sonoma Valley, at 6-0, has a one game lead over Analy.  Petaluma is two back.
NCL I
Willits at No. 7 Middletown
Cloverdale at Clear Lake
Kelseyville at St. Helena
Fort Bragg at Lower Lake
LEAGUE OVERVIEW: This race can go in many different directions.  Middletown is in sole possession of first place.  Sitting one game back is four teams, including the Willits team they host tonight. Also one back is Cloverdale and Clear Lake who also play. The fourth team is Kelseyville.  The start of what could be a telling week, on Friday Cloverdale is at Kelseyville and Clear Lake travels to Willits.
My email address is jacpasquini@comcast.net
casa VS NEWMAN,ysn recap
Share