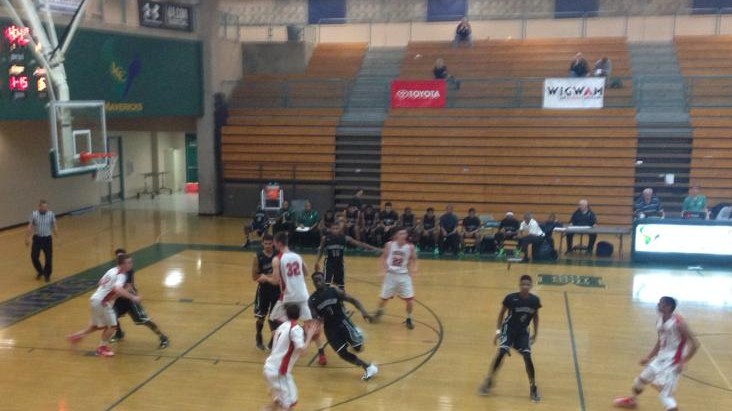 The YSN365.com No. 2 ranked Montgomery Vikings Boys basketball team is spending this holiday weekend in Southern California. They are down there on a business trip.
That business trip is the Torrey Pines Holiday Classic.
The first round of the tournament was on Friday and what an opener it was for Montgomery. The Vikings rallied from a first half deficit to defeat Franklin of Seattle, Washington 65-58. A 15-3 run in the third quarter was the difference, as that wiped out a 30-23 halftime lead for Franklin.  6’ 11” Erik Poulsen had his biggest game this season, scoring 33 points, as Montgomery raised its record to 5-2.


The tournament is in some ways the Boys version of the Girls West Coast Jamboree. There are five different tournaments going on in a thirty mile area of the San Diego area. Four of the five tournaments have 16 teams in them.
Montgomery is in one of those, called the American Division. Today at 3:50 they will meet Oak Park in a second round game. Oak Park is a Division 1 team that defeated St. Mary’s of Stockton 76-71. St. Mary’s is a Division 2 team in the Sac-Joaquin Section and according to the power rankings is No. 43 in the state. Montgomery is No. 51. Oak Park went into the game with a 7-5 record and is No. 126 in the state according to the Power Rankings.
Win or lose, Montgomery will next be in action on Monday when they will meet either St. Augustine or Sonora. Those two teams have a combined record of 17-5 and over the last two seasons are a combined 110-17.
My email address is jacpasquini@comcast.net
Montgomery basketball,montgomery vikings,torrey pines tourney,under armour holiday classic,ysn365.com
Share