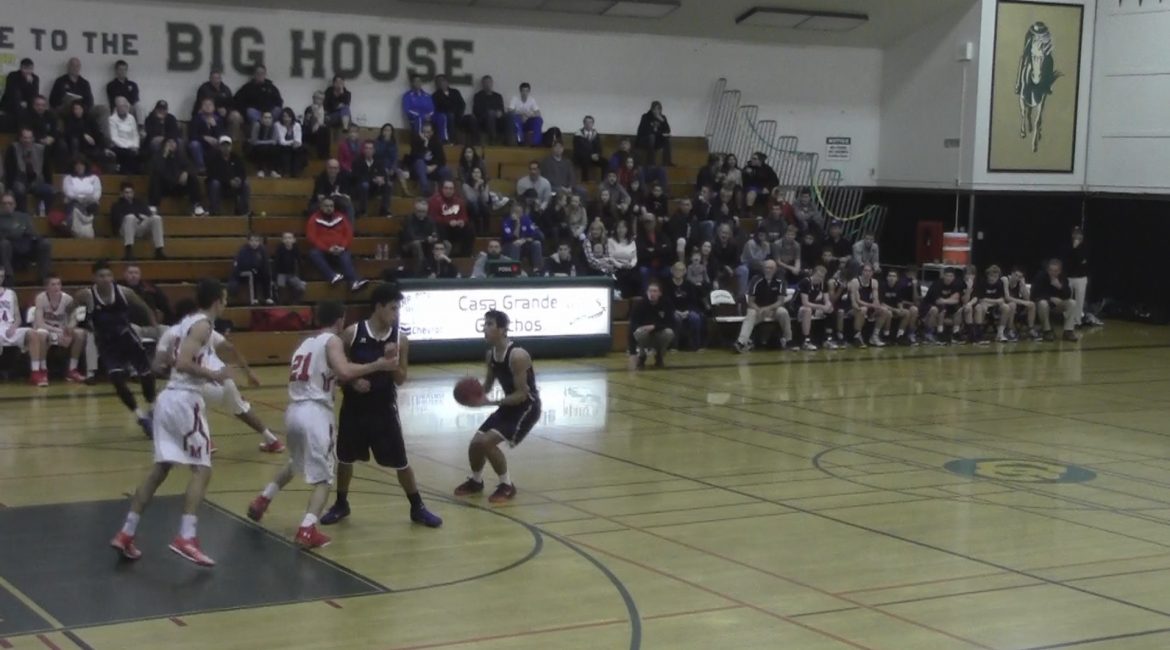 The fantasy was, maybe more than any other Brett Callan Memorial Tournament, that Casa Grande somehow, someway wins the

championship. Reality is the theme of this tournament, more this year than any other year. It didn’t take long for reality to hit.
Casa Grande called its first time out a little more than two minutes into the game and as it turns out they were already out of it. Miramonte was well on its way to a 69-32 win and will meet Montgomery in today’s championship game.
At that first time out, Eddie Ionescu had already scored nine of what would be a game high 20 points and Miramonte had a 13-1 lead. Casa Grande would score the next four points. That would be the last time the difference would be under ten the rest of the way. By midway through the second quarter it was 34-14 and the difference would be under twenty only once the rest of the way. Charlie Hocking helped out Ionescu by scoring 11 of his 17 in the second quarter.
The only major offense Casa Grande got was from Robbie Sheldon who scored 15 points in the first three quarters. Although nine players scored, the next leading scorer had four.
What that did was set up the basketball version of the Egg Bowl for the third place game of the tournament. Casa Grande, who missed its first chance to get back to .500 since the second game of the season and is 3-5, will meet Petaluma.


Petaluma dropped it first game of the season to Montgomery in the other semi-final. They got off to the same kind of start as Casa Grande did , falling behind 12-0. The Trojans did get to within four points midway through the 3rd quarter. But a seven point run to end the quarter gave Montgomery back control and they were on their way to a 46-35 win. It was Petaluma’s first loss in six games.
When new coach Zac Tiedeman played at Montgomery he was one of the best three point shooters this area has ever seen. That looks like it is rubbing off on his team as they were a three point shooting machine. Until the fourth quarter, Montgomery had more points from free throws after being fouled on a three point shot than they did on two point shots. Montgomery didn’t score a two point field goal until early in the third quarter and it gave them a 30-18 lead.
The first five field goals of the game were three pointers. Three of them Lane Young and the other two were by Hayden Lee. The next score was by Lee when he hit three free throws after being fouled on a three point shot. That gave Montgomery an 18-4 lead late in the first quarter. Montgomery had a double digit lead most of the game, except for that third quarter Petaluma run.
Young led Montgomery with 19 points and Lee added 17. Ryan Perez led Petaluma with 17. It was Petaluma’s first loss of the season after starting 5-0. Montgomery raises its record to 5-3.
Cardinal Newman and Analy took wins to start the Friday action.
Cody Baker scored 17 as Cardinal Newman defeated Northgate 53-42.
Analy dominated the second half in a 77-48 win over Washington of SF. Aidan Toner-Rogers and Nick Fujii combined for 40 points.
That sets up an attractive Consolation Matchup between Analy and Cardinal Newman.
10th ANNUAL BRETT CALLEN MEMORIAL TOURNAMENT
AT CASA GRANDE HIGH SCHOOL
FIRST ROUND
Petaluma 59 Cardinal Newman 53 (OT)
Montgomery 56 Northgate 38
Miramonte 66 Analy 61
Casa Grande 67 Washington (SF) 56
SECOND ROUND
LOSER BRACKET
Cardinal Newman 53 Northgate 42
Analy 77 Washington (SF) 48
WINNER BRACKET
Montgomery 46 Petaluma 35
Miramonte 69 Casa Grande 32
SATURDAY SCHEDULE
1:30—7th PLACE…Northgate vs. Washington (SF)
3 PM—CONSOLATION…Analy vs. Cardinal Newman
4:30—3RD PLACE…Petaluma at Casa Grande
6 pm—CHAMPIONSHIP…Miramonte vs. Montgomery
My email address is jacpasquini@comcast.net
Share