Montgomery One Win Away From NBL Boys Title 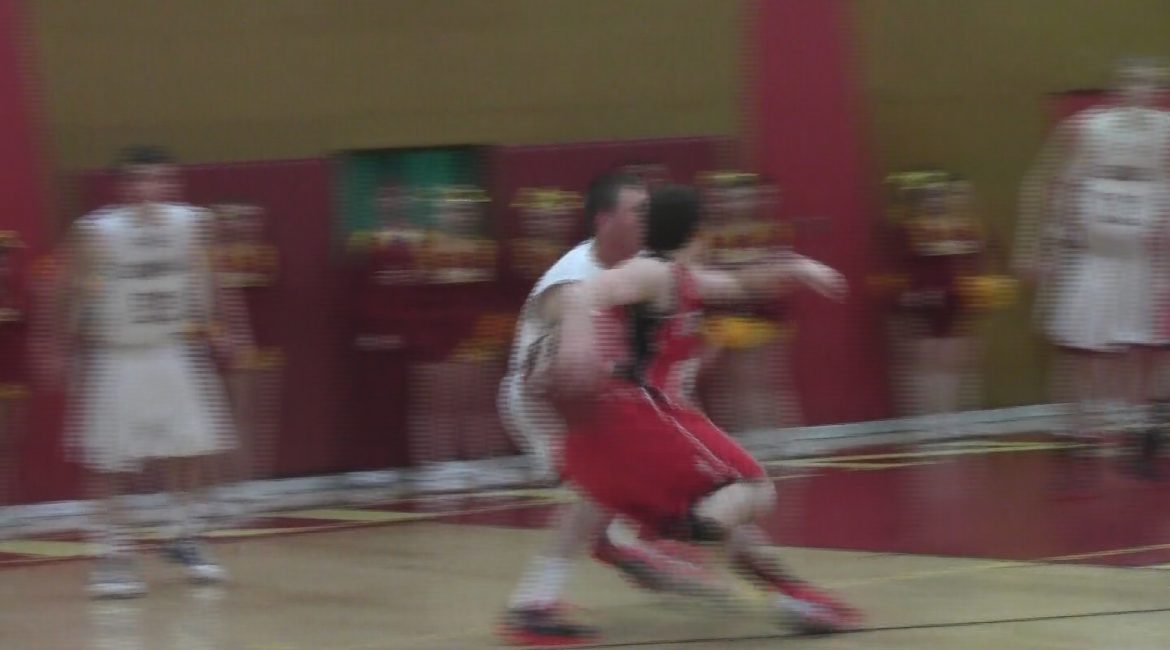 Forty eight hours after regaining control of the NBL race, the No. 1 ranked Montgomery Boys Basketball team tries to wrap it up when they host No. 5 Maria Carrillo Wednesday Night.

The Monday Night game at Cardinal Newman was a typical setting when the Vikings and Cardinals get together.  There was a packed house enjoying a game that went down to the last few seconds.  The only thing missing was a game changing shot down the stretch.

The fact that there wasn’t that shot was surprising, because of the recent history of the games between those teams and the way the game was playing out.  The two teams hit big shot after big shot to set up the thrilling finish.

There was a near miss on another big shot.  Cardinal Newman’s Connor Head put up a three from the corner that would have tied the game at 63 with :15 left.  The ball rimmed out.

Cardinal Newman would have one more chance.  After a missed Viking free throw, Cardinal Newman had the ball with :11 left.  They never got a shot off, losing the ball on a traveling call.

Head’s missed three doesn’t take away from his game.  He scored a game high 25 points, including 16 in the second half, nine of them in the fourth quarter.  The senior guard is Cardinal Newman’s leading scorer at nearly 14 a game.

Despite the close finish it turned out that Montgomery took the lead for good when Sam Averbuck hit a buzzer beater three pointer to give the Vikings a 33-31 halftime lead.   Cardinal Newman had led most of the half, when they went on a 15-0 run to give them a 23-14 lead with seven minutes left in the second quarter.  Sophomore Connor Rubattino helped maintain the lead, until the buzzer beater, by scoring 12 of his 15 points in the second quarter.

The Vikings scored the last eight points of the second quarter to take the lead.   They kept the momentum going to start the third quarter with a 9-2 run which gave them their biggest lead at 42-33 with 5:50 left in the third quarter.  They did that run on all three’s, two of them Rylan Kobre and the other by Keil Long.

Long led a balanced attacked with 15 points.  He was one of four Vikings in double figures.  Alec Raven and Noah Orlik each scored 14 while Averbuck added 12.    Raven missed a good chunk of the second quarter after he picked up his third foul.  He played the whole second half without committing a foul.

Cardinal Newman was behind by 9 one other time and by eight in the second half.  They scored seven straight, five of them by Head to cut the lead to 57-56 with 2:30 left.    The two teams traded baskets to make it 61-60 when Orlik hit two free throws to set up the final twenty five seconds.

A win over Maria Carrillo will not only give the Vikings its third championship in five seasons, it will give them twenty wins, the fourth time in five seasons they have reached that number.

It is looking like Maria Carrillo will meet No. 3 Cardinal Newman in the first round of the North Bay League post season tournament.   The two teams both have three league losses in the battle for the home game.  Maria Carrillo, who has the tie-breaker advantage, hosts Rancho Cotate on Friday in its last league game.

Cardinal Newman hosts Windsor, who although is out of the race for the NBL post season tournament, needs two wins to become eligible for the NCS Division 2 playoffs.  They need to win both of its last regular season games to qualify.  Windsor hosts No. 9 Ukiah on Friday.

Speaking of Ukiah, they are battling No. 8 Casa Grande for the final spot of the NBL post season tournament.   Ukiah is 6-5, Casa Grande is 6-6.

Casa Grande is at Santa Rosa on Wednesday and hosts Montgomery on Friday.

Ukiah hosts Rancho Cotate on Wednesday, are at Windsor on Friday and then have that extra game at Cardinal Newman on Monday.

Ukiah has the tie-breaker advantage on Casa Grande.