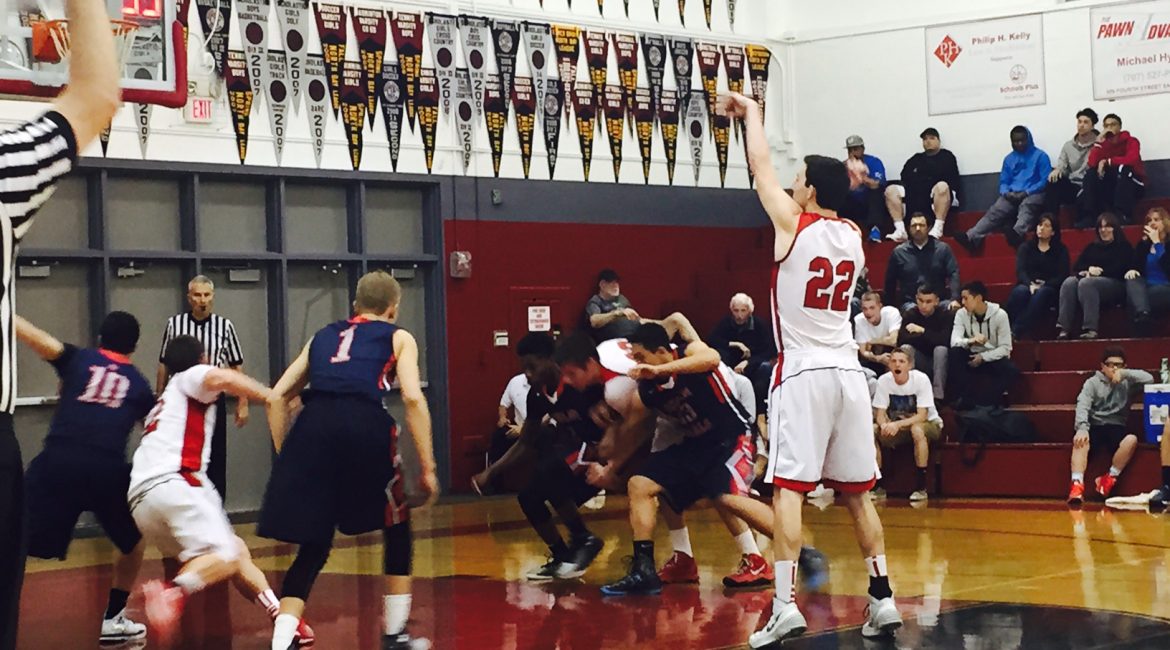 The Montgomery Vikings are hoping the combination that has brought them this far, will lead them to their sixth North Section Championship in school history. The game is No. 1 vs. No. 2 with Montgomery playing the role as the No. 2 seed, meeting No. 1 El Cerrito.
To get the title Montgomery has to go on a road trip.  The game is at St. Mary’s College in Moraga with the tip scheduled for Saturday at 8 pm.
Part of the combination that has been Montgomery in the playoffs, is that they have quit fouling.  In the second round win over Northgate, the numbers were a mind boggling 26-4 difference in foul calls.  In the semi-final win over Dublin, the number was a more modest 20-9.  The two teams combined to attempt nine free throws.
The main strength of this Montgomery team, not only during the playoffs, but the whole season, has been that they have been bigger than the other team.  The main part of the bigger is 6’ 11” senior Eric Poulsen, who has dominated the playoffs.  In the last two games, he has averaged 25 points a game and 13 rebounds.
That is just part of the Montgomery rebound brigade.  In the semi-final win over Dublin, they didn’t get every rebound, but you could make that statement and not be too far off.  There was one possession in the first quarter when Montgomery took seven shots on one possession, before Poulsen was fouled and hit two free throws.  In the first half, Montgomery had a 25-9 advantage on the boards.  For the game it was 43-16.
Poulsen will be the biggest player on the court against El Cerrito.  The closest to him is 6’ 7” sophomore Aaron Banks, who averages a little under eight points a game and five and half rebounds.
Height is not the reason El Cerrito goes into the game with an impressive 28-3 record and an 11 game winning streak. They have three guards who are averaging in double figures, led by Junior Sayeed Pridgett who has a 16.7 average. Junior Carlos Johnson is averaging 15.8, and a team high eight rebounds, which includes eight double-doubles on the season.  Senior Tyrell Alcorn is averaging 14.3 and has taken over 100 three point shots, and has a sparkling 44% shooting percentage.

El Cerrito is a quick team and can cause problems on defense.  Montgomery didn’t handle that very well against Dublin, committing what seemed like turnover after turnover against their pressure defense.
Success is nothing new for El Cerrito.  This is their sixth straight 20 win season and the Gauchos have a record during that time of 151-41.  They haven’t been on the Montgomery fans radar during that time because they have been in Division 3 until this season.  Enrollment wise, they are a Division 3 school, but opt up to Division 2.
Maybe that is because they got tired of Bishop O’ Dowd, who has won four of the last five NCS Division 3 championships. In all the championship runs along the way, they defeated El Cerrito each time, the last two seasons in the championship game.  El Cerrito also lost the 2011 championship game as a No. 2 seed to No. 5 San Marin, who defeated Bishop O’ Dowd in the semi-final.
In the Chronicle rankings, El Cerrito is No. 2, behind No. 1 Bishop O’ Dowd.
El Cerrito is in the Tri County League and had an undefeated league season, a league that has six teams, five of which went to the NCS playoffs.  That makes five of the last six league championships.
Two of the three teams they lost to, will be playing this weekend in different sections, while the other will be in the Nor Cal playoffs. They lost one game in overtime, the other two and the other by four points, so they aren’t too far away from being undefeated.
El Cerrito is looking for its third NCS Championship, the last one was in 2003.
Montgomery has won five NCS championships in its school history.  Four of them have been since 1998 with Tom Fitchie a head coach.  The last one was in 2011.
El Cerrito is the favorite in this game.  It would be a special special championship, if Montgomery can pull this off.
DIVISION 2 BOYS
8 PM AT ST. MARY’S COLLEGE
No. 1 El Cerrito (28-3) vs. No. 2 Montgomery (21-10)
DIVISION 6 BOYS
SATURDAY 8 PM
No. 3 Archbishop Hanna (24-4) at No. 1 St. Bernard Catholic (19-10)
My email address is jacpasquini@comcast.net
You can also now follow me at twitter @homer2612
Share