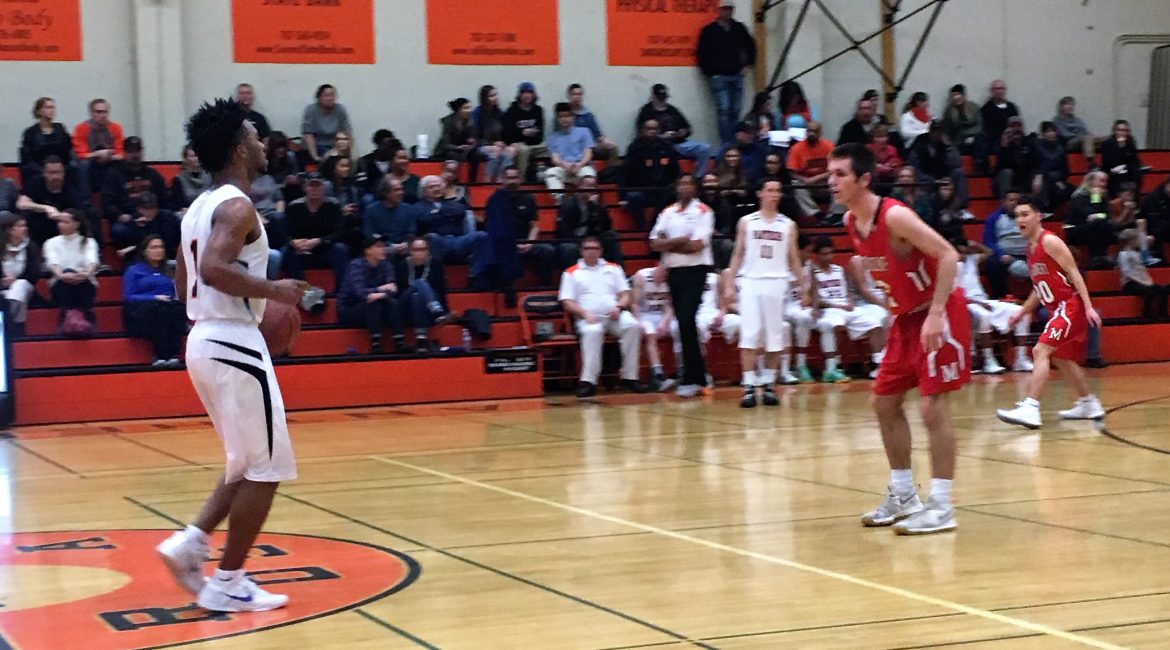 
Make no mistake, Mondays are usually frowned upon, but there was an exception this week, where the atmosphere at Santa Rosa High School was absolutely rocking. The mood was electric, as both schools’ fans came out in full force to pack the stands, as a showdown of cross-town rivals took center-stage. But the favored, visiting Vikings would handle business as usual, cruising easily to a 59-35 rout of the Panthers.
One of the main question marks for the Panthers from the start was two-sport star Kalei Aukai not in the starting lineup for reasons unknown, having several folks scratching their heads. Montgomery’s Evan Poulson vs Santa Rosa’s Isaiah Steele would be the head-to-head matchup to watch early; both forwards fiercely going at it. Steele would respond to Poulson’s opening 3-pointer by posting him up, turning, and hitting a rainbow fadeaway shot off one foot. The Vikings, however, jumped out to an early 10-6 lead after one quarter behind Bryce Burroughs rimming in a 3-pointer, as well as Alex Soria’s beautiful up-and-under scoop layup through three defenders.

Isaiah Steele scored on a nice pump-fake down low and powered his way up for 2. Viking sophomore Tyson Timko came off the bench with confidence to pack a scoring punch in the 2nd period and did just that, draining two shots from way downtown. Ensuing back-to-back buckets for Steele would claw the Panthers into the lead, but Alex Soria would calmly dribble off a screen into a 3-point try from up top and bury it. The Vikings had indeed found an offensive rhythm in the 2nd quarter, as the halftime lead was inflated to 25-13.
Montgomery came out of the locker room just as hot from the field as they were going in, beginning the first four minutes of the 3rd quarter on an 11-3 run. Soria, Riley O’Neill, and Ryan Merriken all hit a 3-ball in that span. But the Panthers’ sharpshooter Alex Diggs would stick his own 3-pointer, and came back on the next possession and laid in smoothly with the left hand. Kalei Aukai hit a standstill midrange jumper, but the Panthers were still down 36-21 at the end of three.
Aukai also made his stamp on the game with a defensive gem, coming from the weakside and rising to swat Alfred Rowan’s shot into the bleachers. The Panthers began to press full-court, but the Vikings had no problems breaking it, as Evan Poulsen got the pass, and drove hard for an easy lay-in. Rowan also snuck behind the press for a wide-open lay-up himself. It was 47-23 with 3:22 remaining at that point. Everything Santa Rosa threw at them, it seemed Montgomery had an answer for. Alex Diggs would later foul out, leaving an obvious hole for the Panthers at the offensive end. Aukai and Andre Gaudreau combined for a pair of threes late, but that would be as close as Santa Rosa would get. Monty would be cash in their free throws late to put this one in the books.
The Panthers shot a measly 26% from the field, while Montgomery notched a 49% field goal percentage. The turnovers favored Santa Rosa though, having only six to the Vikings’ 11. Alex Soria was the scoring leader of a balanced Viking scoring attack with 12. Isaiah Steele led the Panthers with 15 points, with Aukai following with 9.
Montgomery and Santa Rosa retain their 3rd and 4th place positions respectively at the halfway point in NBL play. Head coach Zac Tiedeman will now lead his Vikings, who improve to 5-2 in league, against visiting Ukiah on Wednesday, while the 4-3 Panthers will travel to Maria Carrillo.
Share