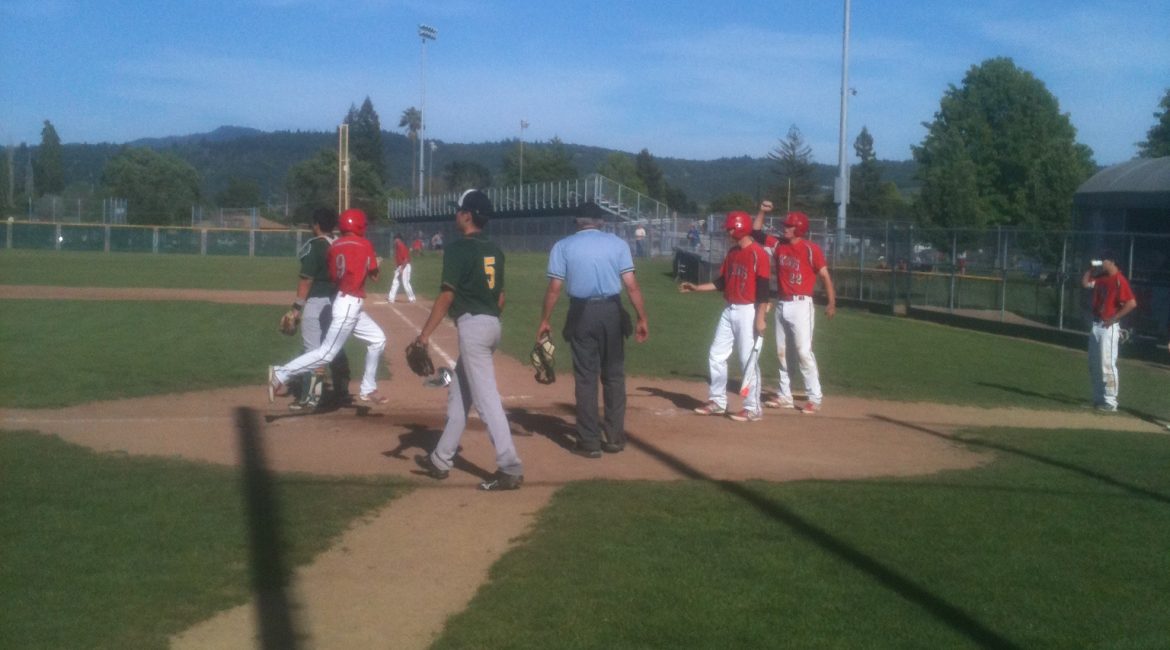 One down and one to go.

The No. 8 Montgomery Vikings basically needs to win two home games in a twenty four hour period to stay in the North Bay League Baseball race.    They started out in promising and dominating fashion, taking a 6-0 win over No. 3 Casa Grande.   They will be back on the home field Thursday afternoon, meeting No. 5 Cardinal Newman, who is also facing what looks like a must win situation to stay in the race.

This is the start of the second half so it is a little early to call games must wins.  But unlike the softball portion of the North Bay League race which is getting tighter and crazier each day, the baseball race has a clear cut front runner and that is No. 2 Maria Carrillo who now has a two game lead in the loss column, after holding off Cardinal Newman 7-6.

Cardinal Newman, Casa Grande and Montgomery are all 5-2 in the league play.  Maria Carrillo sits at 6-0.

Montgomery won its game behind a dominating performance by left hander Anthony Prince, who pitched a complete game three hitter, striking out six and walking three.  It was his second win of the season and he lowered his ERA to 1.42.

Montgomery carried a 1-0 lead into the third and got some breathing room on a two out two run double by Sam McBeth, to make in 3-0.   That would be plenty for the Prince, but the Vikings made sure with a three run fourth in which they only had one hard hit ball.   In between two bad hop singles and an error, Josh Lenney blasted a RBI double to deep center.   It could have been worse if it wasn’t for a super catch by Casa Grande third baseman Spencer Torkelson on a hit and run play which he turned into a double play.

This has almost been a disaster week for Casa Grande who played its second game in a 24 hour period. With all the rainouts, it is hard to keep track of all the rescheduled games and Casa Grande had one of those in Ukiah on Tuesday and they rallied late to take an eight inning 5-4 win.

Casa Grande scored single runs in the sixth and seventh to force extra innings, then won it on a RBI single by Taylor Gomez.   That was after Ukiah had runners at first and third with one out, in the bottom of the seventh.

Speaking of make ups, Maria Carrillo still has one left, also with Ukiah, which is a home game that will be played next Tuesday.

Maria Carrillo is on a big time roll, winning its tenth straight over Cardinal Newman.   They took the lead with four unearned runs in the second and then held on for the win.  Cardinal Newman had runners at first and second when the game ended.

The video highlights of the game are posted here at YSN365.com.

It is clear cut between the top four and the next four in the NBL race.  Remember four teams make the NBL post season tournament.   Rancho Cotate is in fifth place and stayed two games behind the three teams tied for second after pulling out the dramatic win by scoring five in the seventh to defeated Windsor 5-4.

It the other NBL game Santa Rosa won its second league game scoring four in the first and defeated Ukiah 7-0.

It almost impossible to predict anything about the North Bay League Softball race but one thing is for sure, the six teams tied in the loss column will be down to three by the end of the afternoon.  That is because they are all playing each other.

Had all the games been played, this would be the halfway point.  Cardinal Newman still has make up games with Windsor and Ukiah.