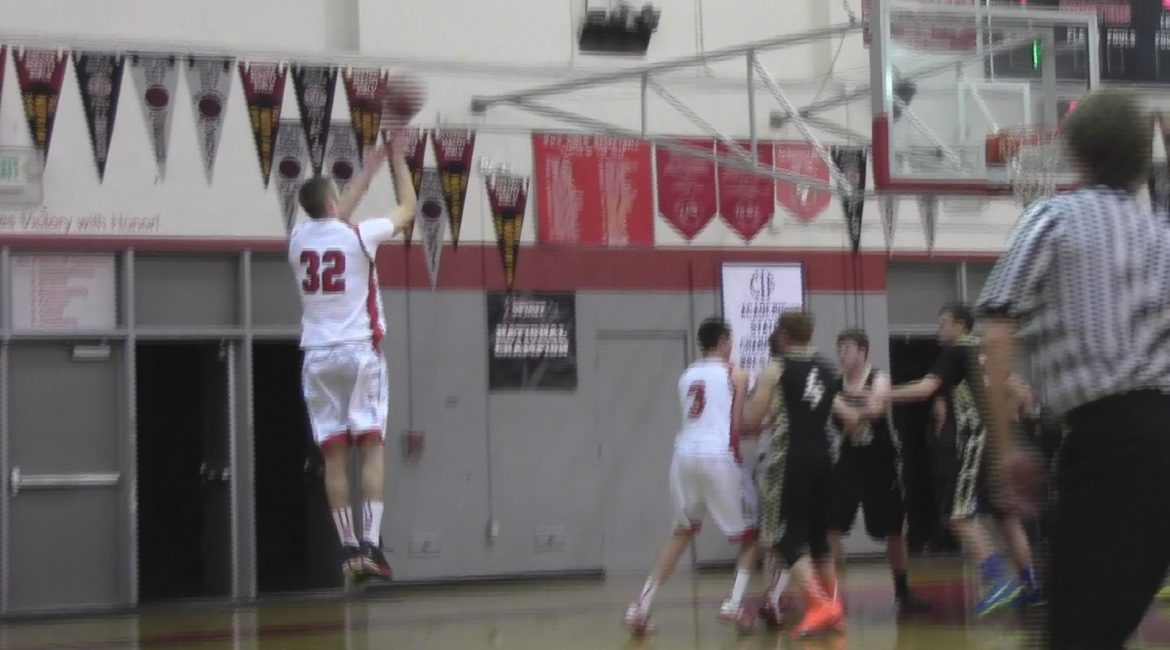 The term North Bay League Basketball race at least for 2014 appears to be a mirage.

Yes there was a three way tie for first place going into Friday night, but it appeared to be only a matter of time.

That time was Friday Night.

With both teams at 3-0, other years or other times the game between No. 1 Montgomery and No. 5 Windsor would be called a showdown.

The biggest showdown appears to be Montgomery against itself.

Montgomery defeated Windsor 61-34 in front of big crowd at the Viking Dome.   Sometimes with a score like that you could see the phrase, the game was closer than the score indicates.

That isn’t the case here.

There were no lead changes in the game.  Montgomery had a 7-1 lead before Windsor scored its first field goal.  By the time they scored its second, it was 18-3.

Montgomery not only has the best team in the area but the best player in Alec Raven.   Raven scored six during the second quarter run.   Then he really went off scoring 14 points during the third quarter blitz, part of a game high 28 points.

If that is all Raven did that would be quite enough thank you.  But that wasn’t it.  Raven was matched up on defense with Windsor’s leading scorer Sadid Sufi ,who at times has been dominating this season.  Not in this game as he was held on three field goals and 9 points.

A thumbnail of the game came in the fourth quarter.   With Raven out of the game, Sufi drove for his third field goal, which was a slam dunk.   The Windsor student section went crazy.   Seconds later Montgomery called a time out and that student section in mass headed for the parking lot.

Actually the cheer competition between the two students section was way closer than the two basketball teams.   That has been the case when it comes to Montgomery and league play.   During the 4-0 start, the Vikings have won by an average of just under 30 points a game.

The only downside was when Raven was hit in the fourth quarter which opened up a cut above his eye.   Stiches were needed to take care of that and he should be fine, as is the Montgomery team who is now 12-4 on the season.   Windsor drops to 11-5.

The Vikings next game is Tuesday Night when they host No. 5 Cardinal Newman.  The best rivalry in the area looked like it would have a little spice to where no spice is needed as a battle between the last two undefeated teams in the NBL race.

That didn’t work out either.

In another one sided game that was as shocking as the Montgomery game wasn’t, No. 7 Maria Carrillo went into Cardinal Newman and took a 67-33 win in a game they led from the start.

The Pumas jumped out to a 13 point first quarter lead.  A five point run right before the half cut the lead to ten and gave Cardinal Newman hope.  But the Pumas slowly pulled away in the second half, that is until the fourth quarter when they went on a 18-3 run to take full control.

Cardinal Newman, Maria Carrillo and Windsor are all 3-1 in now looks like the real battle in the league which is for second place.  Maria Carrillo, who is 11-5 overall, is the only one of the three who hasn’t played Montgomery.    They will do that next Thursday to end the first half.   Before that they host Windsor on Tuesday.

Those two contests weren’t the only one sided games.  Santa Rosa got into the victory column in league play with a 68-27 win over Rancho Cotate.   Dustin Rome, the team’s leading scorer, had 18 points which was his highest scoring game since the opener when he scored 22.   He also had a season high 12 rebounds and for good measure threw in five blocks as the Panthers go to 8-7 on the season.

There was one fairly close game.  Ukiah pulled away in the second half and defeated Casa Grande 41-29.  Brian Sherwood and Gabe Knight combined for 24 points.  Sherwood also had 16 rebounds.

Ukiah is 10-5 overall, 2-2 in league and yes they have played Montgomery.

No. 2 Willits is dominating the NCL I world as much as Montgomery the NBL world.  The Wolverines jumped out to a 29-7 first quarter lead and went on to defeat Lower Lake 76-44. Jon Montez and Will Betts each scored 18 as Willits moves to 14-2.

The SRJC teams got a split in Sacramento.

First the good news and that would be the Women who rallied in the second half for a 62-59 win.  There has been times this season that Gretchen Harrigan hasn’t gotten much help on offense.  Although she scored 21 to keep her State Scoring lead, she did get help in this one from a surprising source.  Former Willits star Alicia Mehtlan, who went into the game with a 6.6 average and hadn’t score in double figures in ten games scored a season high 26 points.   He previous season high was 14.

SRJC is now 12-7 and the only team left undefeated in the Big 8 league race.

The bad news was with the Men who had a seven game winning streak snapped after Sacramento defeated them 53-48.

The Men’s record is 10-7and they are one game behind first place Cosumnes River.

SRJC is next in action Tuesday when they host American River whose Women’s team is one game behind SRJC.