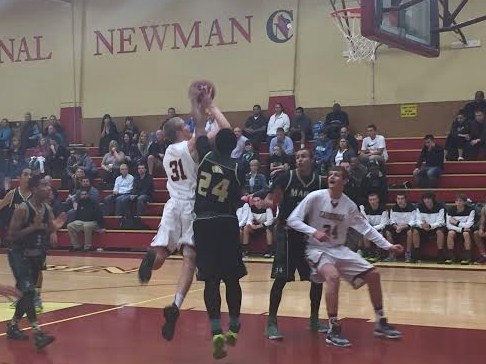 The suspense here in the home stretch for the North Bay League Boys Basketball league championship has already been pretty deep.
For the second time this week, Montgomery faced a do or die fourth quarter if they were going to stay in the race.
For the second time they came through.
Zac Merriken hit his only field goal of the game, a three point shot to open the fourth quarter, to give the Vikings the lead for good and they went on to defeat Casa Grande 50-43.  Merriken’s shot broke a 33-33 tie and Montgomery slowly pulled away despite that was only one of three fourth quarter field goals for the Vikings.
That is because Micheal Septimo had his hands on the ball most of the fourth quarter and Casa Grande could only stop him by fouling him.  Septimo was five of seven from the free throw line in the fourth quarter.  He also hit a field goal that was part of his game equaling high 16 points.
The other player to score 16 points was Casa Grande’s Will Crain.  Crain scored half of those in the first quarter, as Casa Grande jumped out to a 6-0 lead two minutes in.  Montgomery took advantage of the free throw line there, hitting six of eight in an eight point run, which gave them their first lead.  Crain scored all of Casa Grande’s eight first quarter points.
The next two quarters were back and forth with the biggest spread being five.  Montgomery had the lead halfway through the second quarter at 18-13.  Casa Grande then scored seven straight to take a 20-18 lead and took a 27-24 halftime lead on Tommy Buickerood’s three with :07 left.
Casa Grande scored the first hoop of the third quarter to take its first five point lead.  The second would come moments later on two free throws by Cain.  Jack Fitchie hit a three, which started a 7-2 run and tied the game at 33-33.  After over two minutes of no scoring, that was the score going into the fourth quarter.
Montgomery’s defense clamped down holding Casa Grande to three field goals in the last eleven minutes.  The last one was an offensive rebound by Crain with :12 left.  By then, the game had been decided.
Montgomery splits the season series with Casa Grande, and if it comes to that, they hold the tie-breaker advantage.  That is because Montgomery drew a two before the season, Casa Grande an eight.
Cardinal Newman does the best in tie-breakers and would win any tie with the other two teams.
FRIDAY SCHEDULE
No. 3 Cardinal Newman at No. 1 Casa Grande
No. 2 Montgomery at Santa Rosa
Maria Carrillo at No. 7 Windsor
Ukiah at Rancho Cotate
If Montgomery beats Santa Rosa they will tie the Cardinal Newman-Casa Grande winner for the league title.  Both would get pennants.  Who does the best in the NBL post season tournament will be the representative as league champion in the NCS playoffs.
If Santa Rosa beats Montgomery, the Cardinal Newman-Casa Grande winner will be league champion.
My email address is jacpasquini@comcast.net
You can also now follow me at twitter @homer2612