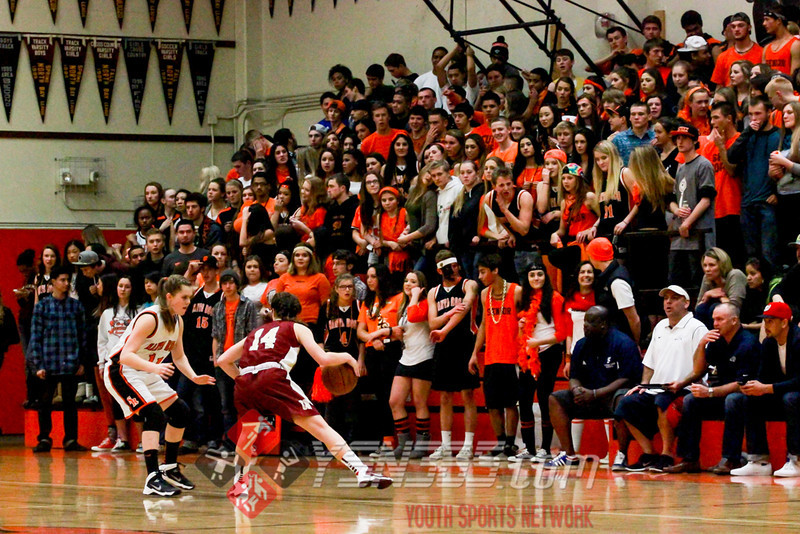 The Santa Rosa Girls basketball team can take a nap.

The Panthers are off until Monday, coming off a streak of five game in nine games, which included the top teams in the North Bay League and a Saturday Noon tip to the East Bay, just hours after one of the most emotional wins of the season.   They fought the flu that is running through the team.   Not only was the flu contagious, but so was the wrist injury.

The excuses were all lined up just in case the team that looked like they wouldn’t lose, lost.

They wouldn’t let it happen.

The latest survival was a victory on Thursday Night over No. 3 Windsor 44-36 in game they trailed at the half and scored the last seven points of the game.

In Santa Rosa’s Tuesdays OT win over Montgomery, the flu cost them bodies. They were: Head Coach Steve Chisholm and Forward Devon Murray who is averaging nearly 16 points and six rebounds a game, both marks are second on the team.

Against Windsor, the team was back at full strength body wise.

Health wise is another story.

Chisholm said he felt better.  Murray may have been feeling better, but the way she left the game in the third quarter gasping for breath, she couldn’t have felt that much better.

Murray wasn’t the only one battling the flu.  Most of the team seemed a step slow all night.

If the battle with the flu was the only problem, that would have been bad enough. Add to it a couple of injuries.   We know the flu can be contagious, but didn’t know injuries were too.

Morgan Bertsch has a torn ligament in her right thumb, which forced her to miss last Saturday’s 57-56 over Heritage and the regulation part of the win over Montgomery.  She her hand taped during the game against Windsor.

She wasn’t the only one.   Also having her hand taped was Kylie Oden because of a wrist injury.   She fell on it in the third quarter, which forced her out of the game and was scheduled to have an x-ray on it on Friday.

The way Murray and Oden left the game you would have thought they were leaving for good.

Wrong.  They were both back in the fourth quarter, a quarter that decided the game.

Windsor played like a team with that kind of record.   A seven point run early in the second quarter gave Windsor a 20-13 lead.  Kerianne Noonan and Jessica Barbosa scored five of the seven points and combined for 24 on the night.   Noonan got a tough roll on a three point shot that would have made it 23-13.  On the next possession Oden, bad wrist and all, buried a three for a six point swing.  Windsor led 22-21 at the half.  Murray scored the first hoop of the third quarter which turned out to give Santa Rosa the lead for good.

The flu and injuries didn’t stop the Panthers from playing defense.   They held Windsor scoreless for the first five minutes of the quarter.

Saying that Murray hit a hoop to give Santa Rosa the lead for good makes it sounds like it was easy after that.  It wasn’t.   Santa Rosa led 37-36 with four minutes to go and held Windsor scoreless the rest the way.

You would have a hard time convincing Windsor that Bertsch had a bad anything.  She was her normal dominating presence, saving the best for the fourth quarter when she scored seven of her 23 points and collected six of her 15 rebounds.  Both were game highs.

Kylie Kiech scored 17 as Cardinal Newman defeated Casa Grande 56-26 to stay one game behind Santa Rosa in the NBL race.

Montgomery got a season high 23 points from Niambi Saint Louis as they pulled away from Rancho Cotate in the second half for a 61-39 win.  The win moved Montgomery to within one game of Casa Grande for the last NBL post season tournament spot.

The league will next be in action on Monday.

The Santa Rosa team will take their nap.