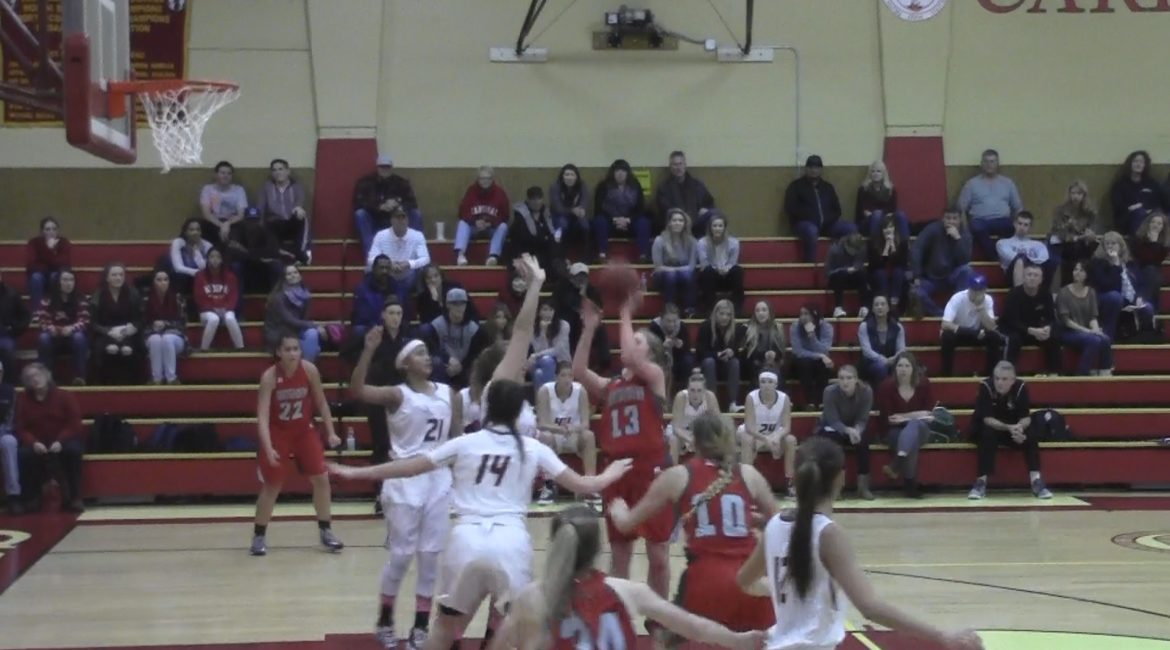 Cardinal Newman (8-2)   MAXPREPS National rank (NR) 35    State rank (SR) 11  Opens the season as the prohibitive favorite in the NBL. The Cardinals return four 1st team all NBL players and the reigning league MVP (Hailey Vice-Neat). The cards have played a grueling pre-season schedule with wins over defending D5(East Side Prep), D3(Sacred heart Cathedral) and OPEN (Chaminade) state champs. Their only 2 losses have come against National #3 ranked St Mary’s (Stockton) and Nor Cal power Salesian.  Do we get the 1st  ever OPEN team from Sonoma County this year by the CN girls?  If not, expect another state run by the deep and talented Cards.   Newcomer to watch: Anya Choice (FR) the youngster is garnering some attention by ‘those in the know” around the state.
Montgomery (9-2)   SR(66)   Returns a solid core of players led by NBL all league returner Shayla Newman (JR).  Monty looks to this observer as a solid choice for 2nd place in league. The Vikes only 2 preseason losses came to east bay power Miramonte and a good Davis team. Expect another 20 win season, a good showing in D2 sections, and a NorCal state invite for the Vikes. Newcomers to watch:  Ashleigh Barr (FR) tall (6ft), athletic and skilled. Keep an eye on her.
Ukiah (8-4)   SR(185)  With a new head coach (Duane Nelson) is generating some excitement up north.  Julie Brown and Kennedy Lynch lead a team of girls who have had some success at the JV and Freshman levels over the last couple of yrs. The question will be does that success translate to the varsity level?  I see Ukiah as a potential NBL Shaughnessy participant and definite D2 section playoff team. We will find out about Ukiah right out of the gate with a league opener vs Montgomery.
Windsor (5-5)   SR(299)  Has a solid core of returners.  Led by 6’1 (JR) Gabby Giddings and guard (JR) Cecilia Smith (younger sister to the Smith twins on the boys team) the Jags hope to stay healthy as their season last year was derailed by injuries.  If healthy I see no reason why they can’t compete for a Shaughnessy berth and make the D2 section playoffs.
Rancho Cotate (8-3)  SR(326)  Comes into this season with expectations at an all-time high around the Cougar campus led by 2 sport stud (SR) Reilani Peleti  and (JR)Camile Spackman. This is the deepest team that Rancho has had in years and I think they could challenge for a Shaughnessy spot and a D2 section berth is very achievable goal.  Newcomer to watch:  Leslie Benjaran (FR)  Coach Mario Newton speaks very highly of her.
Casa Grande (7-3)   SR(351)   Is always well coached and very scrappy. This year’s team will be no different.  (SR) Cassidy McKinney and juniors Hannah Sullivan and Mia Cain will lead the way for Coach Sack. They have an early season gauge of where they stand in the NBL with a home game vs the Windsor Jaguars in their league opener. I see Casa as a D2 section playoff team and in contention for the NBL Shaughnessy playoffs.

Santa Rosa (3-8)   SR(645)   Has struggled early on this season with the ankle injury(and subsequent missed games) to their best player 1st team All NBL returner (SR) Emily Codding. Santa Rosa will go as far as Codding will take them.  Expect some big #’s from Codding on a team that has little else offensively.  Newcomers to watch: Emily’s little sis (FR) Kam Codding has been doing a solid job in the middle for the Panthers so far this pre-season.
Maria Carrillo (4-8)   SR(793)  Has lots of question marks this season. They have an EXTREMELY young team with 4 freshman getting a lot of minutes. In an experienced league like the NBL it makes for a LONG season for Coach Mihiri and the MC Pumas.