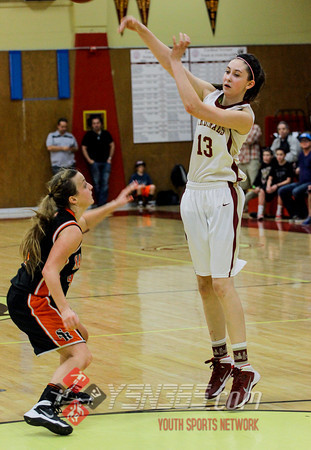 Fans of the Santa Rosa Girls Basketball program found out how life could be without their 6’ 4” Center, Morgan Bertsch.

Fans of the Cardinal Newman Girls Basketball program found out life could be the next couple of seasons with 6’ 2” Freshman, Hailey Vice-Neat.

That combination showed up in the showdown for the NBL Girls Basketball Championship as No. 2 Cardinal Newman defeated No. 1 Santa Rosa 62-53 to take the NBL Girls Championship.  The two teams actually ended the league race tied for the top spot, but Cardinal Newman gets the tie-breaker and will not only be the No. 1 seed in NBL post season tournament, but the League Champion designate in the NCS Playoffs.

Santa Rosa lost Bertsch late in the second quarter when she was fouled and hit her head hard on the floor.  She has what is being called a slight concussion and spent the second half watching the game from the Santa Rosa bench.

Bertsch is the Santa Rosa’s leading scorer and rebounding averaging a double-double on the season.  She appeared to be headed in that direction with six points and eight rebounds when the foul occurred with less than a minute to go in the first half.

Santa Rosa lit up its part of the big crowd when Sara Howard made a steal and beat the Cardinal Newman defense and the clock down the court to score a lay-up just before the buzzer to give Santa Rosa a 26-18 halftime lead.

There was no way to know what kind of impact Vice-Neat would have on the game at that point.   She had two points and two rebounds at the intermission.  In the first minute of the third quarter, she doubled both numbers and that was only the beginning.

She scored Cardinal Newman’s first eight points of the half to cut Santa Rosa’s lead 29-26.   Then for some reason she was taken out of the game.

She wasn’t out long.

Santa Rosa couldn’t match up with the height of Cardinal Newman and Vice-Neat was dominant.   She scored a season high (since she is a freshman that would be a career high) 25 points and ended with eight rebounds.

It wasn’t just the inside game for Vice-Neat.  She hit from everywhere.  Part of her offense was hitting two three point shots but also hit from almost every range on the floor.  In a game that wasn’t dominated by free throws until late, when Santa Rosa had to foul, Vice-Neat hit nine of ten from there.

Both teams handled the pressure of the game and playing in front of the big crowd well from the line.  Santa Rosa was eight of ten and Cardinal Newman eighteen out of twenty one, including hitting all eleven in the fourth quarter.

The final score is a little deceiving.  Santa Rosa led 44-40 with five minutes left.  The Panthers couldn’t find an offensive spark, except for Katie Daly who scored a team high 20 points, including the last 11 for Santa Rosa.

That wasn’t nearly enough as Cardinal Newman was on fire.  They scored 29 fourth quarter points, which is the most that they scored in any quarter this season.  Vice-Neat scored 12 and Kylie Kiech added 8 of his twelve points.

We went this long without mention Sophomore Tiffany Salinas, who is Cardinal Newman’s leading scorer.  She was in the game.  Boy was she.

Salinas scored 21 points and pulled down nine rebounds, six of them in the fourth quarter.  She scored on a three point play with four minutes left to give Cardinal Newman the lead 45-44.  It was Cardinal Newman’s second lead of the second half and they wouldn’t trail again.

Santa Rosa has an eighteen game winning streak snapped and is now 24-2.

No. 8 Casa Grande rallied in the fourth quarter to No. 6 Montgomery 42-35 in was an elimination game for the NBL post season tournament.

The North Bay League Post Season Tournament first round games are on Tuesday at 7 pm.

No. 4 Casa Grande at No. 1 Cardinal Newman

The championship game is Saturday February 22nd at SRJC.

SRJC Men and Women both win.

We will have more details on that as the weekend goes on.