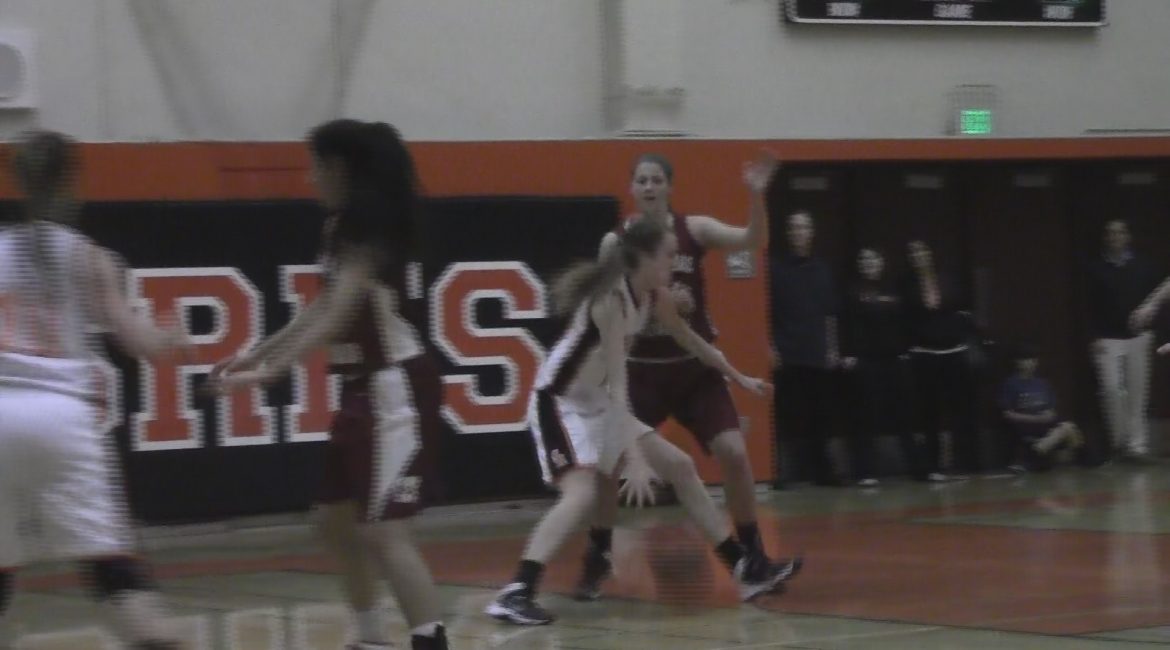 Schedule maker for the NBL, take a bow.

Thursday night is the last night of the regular season and two games have a direct impact on the NBL post season tournament.

No. 1 Santa Rosa at No. 2 Cardinal Newman for the NBL regular season championship.

At the same time No. 8 Casa Grande is at No. 6 Montgomery which is like a play-in game for the post season tournament.

We didn’t get here without some suspense.  On Tuesday, Casa Grande forced Santa Rosa into OT before falling 64-57.

Angela Llaverias scored 20 points to lead Casa Grande, who just missed pulling the upset.   Katie Daly hit a shot with :20 left to tie the game and then held its breath when a driving layup with :07 left rolled off.

A 7-0 run in the overtime pushed Santa Rosa over the top and raised its record to 24-1 on the season and its second overtime league win.

For Morgan Bertsch another double-double with 25 points and 18 rebounds.   Freshman Emily Codding hit four 3 pointers on her way to a 14 point game.   The two also combined for 11 of 13 blocked shots.

Brooke Santander scored 11 and Meagan Burke added nine for Casa Grande, who falls to 14-11 on the season.

Santa Rosa, who scored as many points in the OT as they did in any of the first four quarters, has clinched a tie for the league regular season championship, but Cardinal Newman gets the tie-breaker if they win on Thursday Night.

No. 3 Windsor started out like they were going to ruin the Thursday Night suspense by jumping out to a 7-0 lead over Cardinal Newman in the first two minutes of the game.   Cardinal Newman called a time out, settled down, then went out and scored eight straight with Tiffany Salinas scoring six of her 12 points.

Windsor’s Jessica Barbosa helped keep it a game in the second quarter by scoring all of the team’s seven points.  She was the game’s leading scorer with 15.   Kylie Kiech hit a basket with one minute to go in the quarter to give Cardinal Newman the lead for good at 20-18.

After trading basket early in the third quarter to make it 22-20, Windsor didn’t score another field goal the rest of the quarter and Cardinal Newman went on a 13-3 run to take a 35-23 lead.  The closest Windsor would get in the fourth is six points.

Both teams are 19-6 overall on the season.

Windsor is the only one of the four teams that will make the NBL post season tournament set where they will be seeded.  That will be No. 3 and they will be on the road to meet the loser of the Santa Rosa-Cardinal Newman game in the first round next Tuesday.

Windsor travels to Ukiah to end the regular season on Thursday. It will be their second chance at getting win No. 20, which would be a first in school history at reaching that mark.

Niambi St. Louis led Montgomery with 17 points as they move to 13-12.  A over .500 record is needed to qualify for the NCS playoffs, so the Vikings may need the win for that.

The last time Santa Rosa met Cardinal Newman, the Panthers pulled away late for a 57-41 win.   The game was at Santa Rosa on a Friday Night was in front of what is believed to be the biggest girl’s regular crowd in area history.

It was warned here not to treat that game as you regular girls game because of what the crowd could be.   This is a repeat warning of that.

Like Santa Rosa, the Girls No. 7 Cloverdale had to go overtime before defeating Middletown 57-47 to sew up the NCL I race.   Cloverdale is 16-7 on the season and 11-0 in league play.

Middletown had a chance to win it at regulation, but missed one of the free throws. They jumped out to a 47-43 lead in the overtime.   Bailey Stewart threw in back to back three pointers to give the Eagles the lead for good.  It was two of four three pointers for Stewart, who was Cloverdale’s leading scorer with a season high 12 points.

Cloverdale has a three game lead over Middletown with three to go.  The Eagles would get the tie-breaker because of a 2-0 record against them.   In the first victory it was a 50-48 game.

The Boys No. 4 Willits also has a three game lead over Middletown with three to go.  They still have Middletown to play so it isn’t sure if they get the tie-breaker or not.  Either way they are in pretty good shape.

Willits raised its record to 21-2 with a 66-43 win over Lower Lake.   Jon Montez led the way with 24 points, which put him over the top as the highest scorer in Willits history.

Willits can wrap up the league crown with a win at St. Helena Friday Night.

No. 7 Elsie Allen defeated Sonoma Valley 44-30 and has tied a school record for the most wins in a season. The 18-8 Lobos are finished with the regular season, so they won’t have a chance to break the record until the first round of the Sonoma County League post season tournament.

Jesse Summer hit 3 of 4 three point shots on his way to a game high 17 for Sonoma Valley.

There is one more league game for everyone but Elsie Allen.  Even so the SCL Boys Post Season Tournament First Round Is Set

The games are Tuesday at 7pm

The championship game will be Thursday at the home court of the team with the highest seed.

Both the SRJC teams won and it was a especially good night for the Men.  That is because while they were winning, Cosumnes River was losing, so the Bear Cubs are tied for first place with three games to go.

Cosumnes River, who is ranked No. 6 in the state, was defeated by at home by Sierra 78-68.  Sierra came into the game with a four game losing streak and 2-8 league record.

SRJC finishes the regular season with two games at home including the finale against Cosumnes River.

The Women are still tied with San Joaquin Delta after both picked up wins.

SRJC jumped out early and defeated Sacramento 59-40.   Gretchen Harrigan scored 25 points and is averaging a state best 25.2 a game.