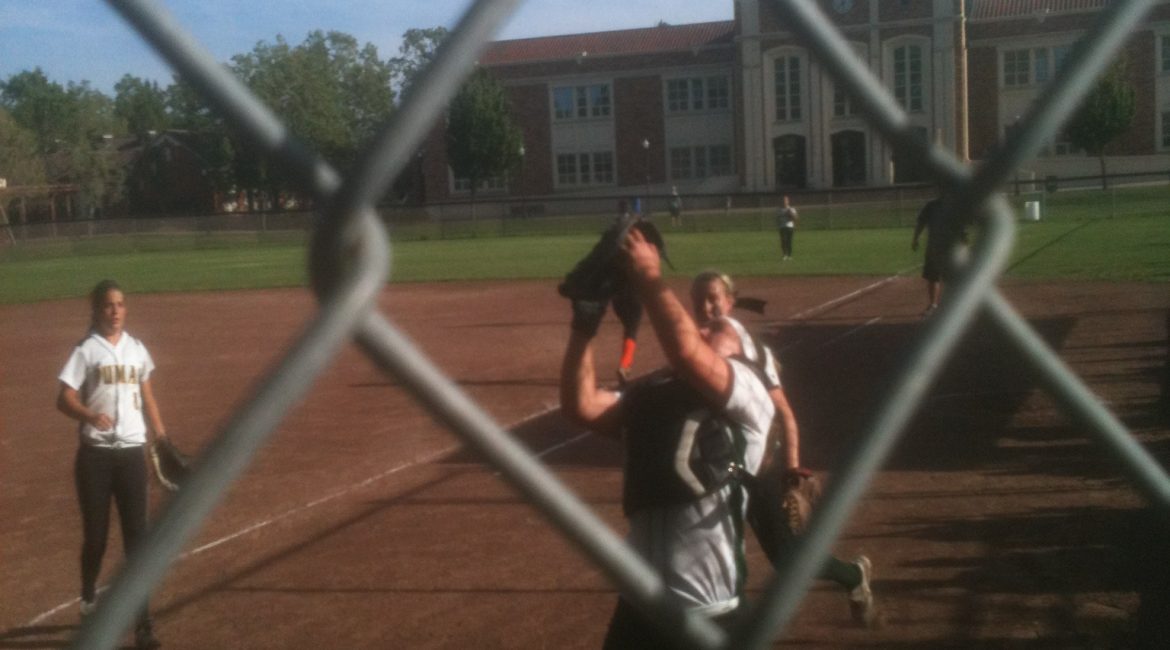 It is game on in the NBL Softball race.

No matter how it ends up, it will have a hard time topping a week of thrilling games ending with one that changed the race.  It wasn’t a thing of beauty, but No. 7 Santa Rosa will take it as they defeated No. 1 Maria Carrillo 3-2, in a nine inning thriller to throw the league race into a mess.

One thing that was a thing of beauty was the pitching of Santa Rosa’s Johanna Peelan and Carrillo’s Robin Johnson.   The two kept things a pitching duel despite the teams combining for eight errors.

Peelan had better numbers; Johnson was more dominant, except for one part of the order.  Peelan would have the last say with her glove and bat.

Peelan allowed two hits through the first six innings.   She kept dodging bullets early as Maria Carrillo left two runners on it in the first and third and one runner in the fourth and fifth.  That is because of five Santa Rosa errors that led to two unearned runs, one in the third and one in the fifth.

Santa Rosa’s defense settled down after that.  The biggest defensive play was by Peelan and that came in the top of the ninth.  With runner at second and third and one out, Brittney Veler hit a soft liner back to Peelan, who stretched out to make a nice catch and doubled off the runner at second base to get out of the inning.  It ended a frustrating game for Veler, who after going hitless in five at bats saw her average drop sixty points to .580.

As for Johnson, she was for the most part dominating, with thirteen strikeouts.  If you take away the No. 1 and 2 spots of the batting order she had a four hit shutout.

Those top two caused all the problems.  Maybe we got a hint of what was going to happen in the first inning.   Leadoff hitter Taylor Matthews was the first out of the game by flying out to left.   But she made Johnson earn it in a nine pitch at bat.  That turned out to be her only out of the game.

The tag team combination of Mathews and Megan Fassold turned out to be the difference.  Both had four hit games and in three of the at bats they had back to back singles which led to the three runs with Mathews scoring all of them.

Each rally was after Maria Carrillo had taken the lead in the top of the inning, Mathews and Fassold had back to back singles to start the rally.   They got help with the first one in the third, when Fassold’s hit got through the left fielder and went to the fence.  By the time they got the ball in Matthews had scored to make it a 1-1 game.

Santa Rosa scored the first earned run in the bottom of the fifth.  After Mathews and Fassold did their thing to put runners at first and second with one out, it appeared that Johnson would get out of it with strikeout number eight.  But on the next pitch, Denia Vera hit a solid line drive single to left center to score Matthews and re-tie the game at 2-2.

In the ninth, Matthews and Fassold did it again with back to back singles.  Fassold’s single got through the center fielder to put runners at second and third and no outs.  After an out and a walk to load the bases, Peelan drilled a ball to deep left that one hopped the fence to end the game.

So the NBL race now has five teams within one game of each other in the loss column.  Santa Rosa at 4-1, is in sole possession of first place because they have played one more game than Maria Carrillo who is 3-1.  Cardinal Newman and No. 4 Windsor, who on the original schedule were supposed to play, are at 2-1.    That game was moved to April 28th.

After losing two games this week, No. 5 Rancho Cotate defeated Casa Grande 10-5 to get back in the race at 3-2.

After a week of thrilling games, the race continues on Monday when Maria Carrillo travels to Windsor, in a make-up game.

It was a huge game in the NCL I race between No. 3 Cloverdale and No. 8 Lower Lake.   Both teams went into the game with a 3-0 league record.

The two teams combined for 12 runs, 3 hits and seven errors.  There were also ten walks, nine of them by Lower Lake.

Cloverdale committed six errors, three of them in the first inning as Lower Lake took a 4-2 lead.

She also almost got the loss.  Lower Lake went into the seventh inning with a 5-3 lead.  They were one out away from the upset when Amy Mora hit a two out two run triple and scored on a passed ball to give Cloverdale a 7-5 win.

As expected No. 2 Petaluma and No. 6 Analy won easily.  Analy got a combined no-hitter from Saja Spearman-Weaver and Taylor Christy in its win over Elsie Allen.

Petaluma and Analy are 4-0 and tied for the top in the SCL Softball race.  Analy’s next two games are against Sonoma Valley (3-1) today and Petaluma next Tuesday.