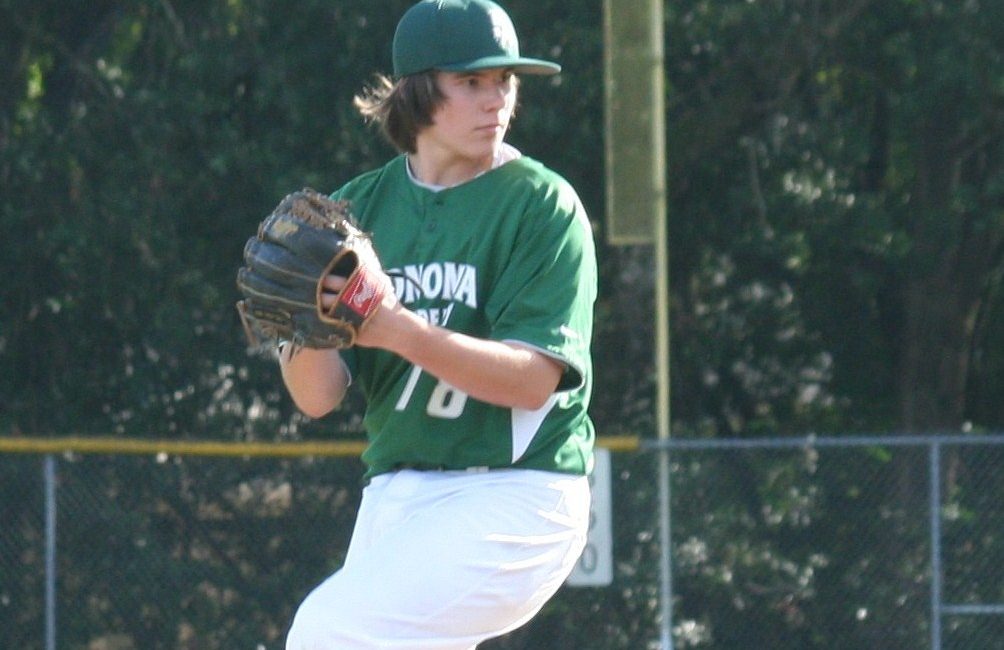 After defeating Maria Carrillo in the first round 5-3, Pinole Valley is playing its second straight playoff game against an NBL team.  During the regular season Pinole Valley went 2-2 vs. NBL teams.
DIVISION 4
No. 10 Cloverdale (16-9) at No. 2 Justin Siena (14-10)…Saturday 1 pm
Justin Siena’s record is nothing to be scared of, but the league they are in is.  That is the Marin County League, which has seven teams that won first round games and all the teams are a No. 3 or higher in four different divisions, which means they will all host a second round game.
Justin Siena is the Defending Division 4 champions.
DIVISION 5
No. 8 Stuart Hall (17-8) at No. 1 Clear Lake (25-0)…Saturday 1 pm
No. 6 St. Vincent (21-4) vs. No. 3 Redwood Christian (20-5)…at San Leandro Ball Park…Friday 7 pm
No. 10 Sonoma Academy (17-4) vs. No. 2 Branson (15-11)…at College of Marin…Friday 5 pm
Clear Lake met a 10-12 Bay School of San Francisco team and won the game the way a team with a undefeated team record is supposed to against an under .500 team, taking an 11-1 win.
Stuart Hall blanked Marin Academy 3-0 in the first round. Junior William Reader pitched a five hit shutout to raise his record to 10-1.  Take away that and Stuart Hall is a .500 team.
St. Vincent took the NCL II championship with a win over Sonoma Academy on the last day.
Redwood Christian won a NCS Division 5 Championships in 2010 and 2011.
Branson is part of the monster Marin County League.
DIVISION 6
No. 4 Tomales (11-8) at No. 1 Rincon Valley Christian (18-4)…Saturday 1 pm
No. 3 Point Arena (11-6) at No. 2 St. Bernard Catholic (13-13)…Saturday 4 pm
This is an eight team tournament, so this is the semi-finals
Rincon Valley Christian and Tomales finished third and fourth in the NCL II race.  Rincon Valley Christian went 2-0 vs. Tomales in league play.
St Bernard Catholic has won five of eight NCS Section Championships.
SOFTBALL
DIVISION 2
No. 8 Petaluma (24-3) at No. 1 Livermore (16-9)…Saturday 2 pm
No. 10 Rancho Cotate (21-6) at No. 2 Alhambra (22-3)…Friday 4 pm
Petaluma first round win over Ukiah gave them the unofficial local championship.
Livermore is in the East Bay League. They have five teams still going in the playoffs. Three of them are in Division 1.
Alhambra has won fourteen straight and has outscored teams by an average of 11-2. The reason they aren’t the No. 1 Seed is because they lost the opening game of the season to Livermore 8-6.
Alhambra is the defending Division 2 Champions.
DIVISION 3
No. 5 Analy (16-11) at No. 4 Albany (15-6)…Friday 4 pm
Albany won its first round game 15-0 over El Cerrito.
DIVISION 4
No. 5 Berean Christian (18-7-1) at No. 4 Cloverdale (20-4)…Saturday 4 pm
No. 7 Cardinal Newman (12-8) at No. 2 St. Patrick-St. Vincent…Friday 4 pm
No. 8 Lower Lake (19-6) vs. No. 1 Marin Catholic (21-3)…at College at Marin…Saturday 2 pm
Berean Christian and Cloverdale met in a wild game on March 21st. It had three ties and four lead changes. Berean Christian scored three in the bottom of the ninth to take a 9-8.
Cardinal Newman knows about that kind of win.  They had the most exciting first round win of any local team scoring four in the bottom of the seventh to edge Justin Siena 8-7.
Marin Catholic has an 11 game winning streak.  They came in second in the Marin County League race, finishing one game behind Redwood who is the No. 4 seed in Division 2.
DIVISION 5
No. 9 Valley Christian (13-9) at No. 1 Clear Lake (17-6)…Saturday 4 pm
No. 5 St. Vincent (15-10) at No. 4 Calistoga (18-8)…Friday 5 pm
Clear Lake is hosting a NCS doubleheader of sort.  The baseball team plays at 1 pm.  The softball team plays at 4.
Calistoga and St. Vincent are meeting for the fourth time this season.  Calistoga has won two of three, the last game last Thursday, taking a 6-4 win in the NCL II Tie-breaker game.
DIVISION 6
CHAMPIONSHIP GAME
No. 2 Rincon Valley Christian (9-11) at No. 1 Laytonville (12-9)…Saturday 2 pm
This was a three team bracket so it is the Championship game. It is Laytonville’s first NCS game.
My email address is [email protected]