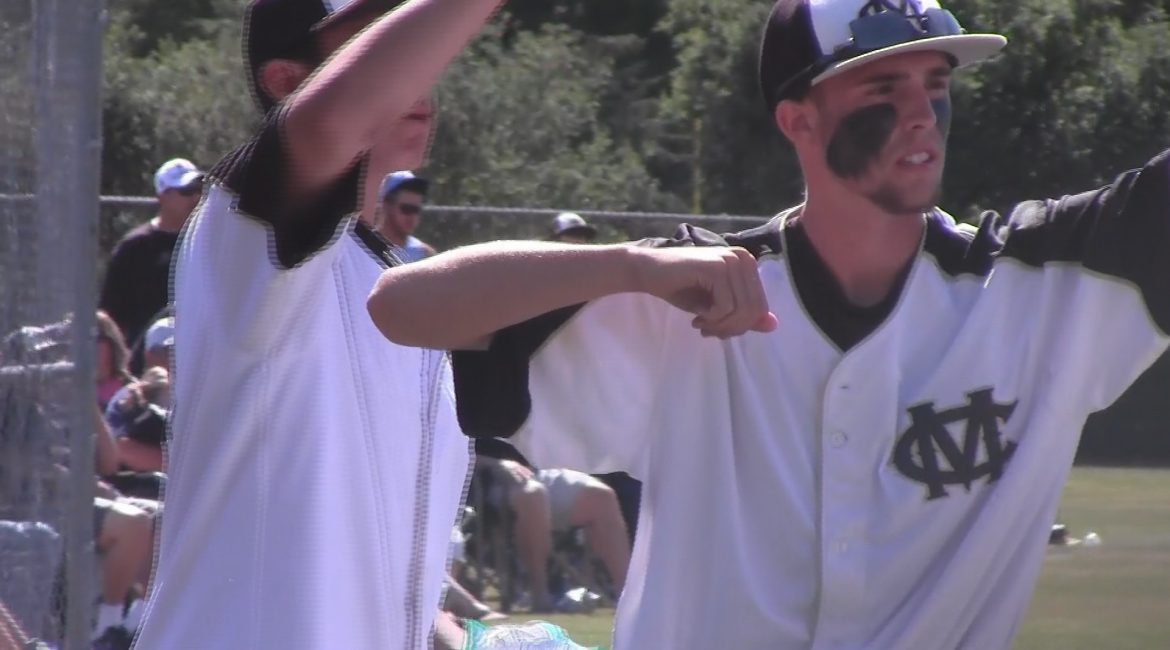 If you have thought about going to a high school baseball game, the NCS Division 2 second round game between Cardinal Newman and Casa Grande might not be a bad choice.

With a sporting event you are never sure if it will be a close game,  but the recent history suggests this will be.

If you briefly look at this game you might not agree with that.

Hardly numbers to get the blood pumping or think close game.

Well for this game forget about the seedings and the record.

These two teams can’t seem to avoid each other.  This will be the fifth meeting between the teams this season.

They knew they would meet each other twice during the North Bay League season.

They were both in the Adam Westcott tournament, which Casa Grande host and they met in the Semi-Final.

They were both in the NBL Post Season tournament and met in the Championship Game.

Casa Grande has won three of the four, with all the wins by one run.  Of course you could say Casa Grande wins all its games by one run and that wouldn’t be too much of an over exaggeration.

Cardinal Newman’s win was the only league loss by Casa Grande, and that was by the one sided score of 4-2.

Yes a two run game between these two teams is one sided.

In the four games, Casa Grande has outscored Cardinal Newman 10-9.

Here is a brief recap:

Cardinal Newman had a 3-1 lead after 4 1/2.  Casa Grande scored a run in the fifth and two in the seventh to steal the win.

They key between these two teams is taking care of the ball on defense.  In the four games, Cardinal Newman has committed seven errors which led to five unearned runs.

Everything else is pretty close.  Casa Grande is averaging seven hits a game, Cardinal Newman six.

Everything about this series has been close.

But maybe we are looking at this wrong.

Maybe after all those close games, it is overdue for these teams to have a one-sided game.

The winner of this game could be meeting another NBL team in the NCS Semi-Finals.  That would be No. 4 Maria Carrillo, who hosts No. 5 College Park on Saturday.

Maria Carrillo has won seven of eight, including a 6-3 win over Concord in the first round of the NCS playoffs on Wednesday.   This is a young team that appears to have the best coming.  They have three seniors on the roster, compared to seven freshman and four sophomores.  Five of its eight losses are by one run.

At 19-5 College Park is trying to a twenty win season for the second straight season.  They finished second in the Diablo Valley League, one game behind Clayton Valley, who is the No. 3 seed and hosts Newark Memorial in another second round game on Friday afternoon.

College Park did play one NBL team in the pre-season, going on the road to defeat Cardinal Newman 6-2.

Including softball, the NBL baseball teams are three of 19 from the NBL, SCL and the NCL world still going in the NCS playoffs.  Cardinal Newman and Maria Carrillo are two of six that have a team in both sports.  The others are Analy, Sonoma Valley, St. Vincent and Tomales.

Here is a preview of what the team’s early part of Memorial Day weekend looks like.

Analy is the regular season champion.

These two can’t meet until the championship game, which is still two wins away.

Both teams play on the home field on Saturday.

No. 3 Analy goes against No. 6 Alhambra on Saturday afternoon,  while No. 4 Sonoma Valley meets No. 5 El Cerrito at Arnold Field Saturday evening.

Analy is trying to add on to a historical season which saw them go undefeated during SCL league play, which gave them its first league championship since 2001.

The Tigers are 21-5, which is the first season they have been over .500 since 2008 when they went 23-5.  That season ended in the NCS semi-final with a loss to Miramonte who was the No. 1 seed and won the Section Championship later that week.

They meet an Alhambra team that is 16-9 on the season and finished third in the Diablo Foothill League.   The two teams who finished ahead of them are Campolindo, has been the monster of Division of Division 2 and Acalanes who is the No. 1 seed in is turning into a monster in Division 3.

Speaking of, besides a four game losing streak at the mid-league mark, Sonoma Valley season has been impressive.   Since the losing streak they have won five straight to raise its record to 18-9.  Part of the five game winning streak was winning the SCL post season tournament with one of two wins over Analy.

The Dragons won its opening round game 12-3 over Encinal.

El Cerrito needs a win to hit the twenty win mark for the first time since 2010.  They beat Piner 4-2 in Round One.

The league champion St. Helena is a No. 6 seed and travels to No. 3 Piedmont.   After a 5-5 start, they have won fifteen straight including a 9-2 win over Fortuna in the first round.

Piedmont also met an NCL I team in the first round, defeating Fort Bragg 10-4.  The win gives them a six game winning streak.  They came in third place in the Tri-County Stone League, one game behind Co-Champions St. Mary’s and Pinole Valley.  St. Mary’s is the No. 1 seed.

The other NCL I team hitting the road is No. 7 Kelseyville who travels to No. 2 Justin-Siena Friday afternoon.  The two teams met on March 16th with Justin Siena taking a 10-1 win.

No. 4 St. Vincent host No. 5 Athenian where a win will give them a twenty win season for the third straight season.  They have won at least 19 in every season since 2007.

St. Vincent has reached the section semi-finals in three of the last four years.

Athenian survived the first game of the playoffs with a three run seventh to defeat Bay School of SF 4-3.

No. 1 Tomales and No. 2 Point Arena both have home games.

No. 1 Tomales goes against No. 5 CSD on Friday afternoon.

No. 2 Point Arena meets No. 3 Ferndale at the same time.

Point Arena is the defending champion and defeated Ferndale 5-3 last year in the championship game.

No. 1 Petaluma goes for its 26th straight win against No. 8 Livermore.    The Trojans have been dominating outscoring opponents 209-25. That includes a 7-0 win over San Lorenzo in Round One.

Livermore is 14-9 on the season including a 10-0 win over Rancho Cotate in the first round.

No. 6 Maria Carrillo is heading on the road and might have a chip on its shoulders.  In the latest power rankings, which include the first round, they are ranked No. 1 in the Division.

Yes they have gone ahead of Petaluma.

Another case of trying to figure out power rankings, but even if you don’t understand that, just as hard to understand is Maria Carrillo a No. 6 seed.

They travel to No. 3 Clayton Valley, who is No. 5 in the power rankings.

Can we say East Bay Bias?

Clayton Valley is tied Concord in the Diablo ‘Foothill League and is 20-3 on the season.   Concord is the No. 4 seed and is hosting No. 5 Pinole Valley.

Two teams that took a backseat to Petaluma in the SCL race are still alive and kicking.

One gets a home game, the other a long road trip.

No. 4 Sonoma Valley gets the home game against No. 5 Acalanes.  Both teams had first round byes.

Sonoma Valley is a combined 1-4 against Petaluma and Analy and 17-2 against everyone else.

Acalanes had the same kind of season as Sonoma Valley.  They came in second in the Diablo Foothill League.  The league champion was Alhambra who dominated the league as bad as Petaluma dominated the SCL, outscoring opponents 167-8.

Acalanes is 17-5 on the season, with two of the losses to Alhambra by a combined score of 21-1.

No. 6 Analy rallied to defeat No. 11 Albany 2-1 in the playoff opener.  Alina Goodrum pitched a complete game to raise her record to 9-1 and give Analy a twenty win season for the first time since 2006.

The reward is a Saturday trip to No. 3 Eureka, who is No. 1 in the Division power rankings and 3-1 vs. NBL teams, the lone loss to Rancho Cotate.

Two of the top three seeds in this bracket are from Sonoma County and if things go right they will meet in the next round.

No. 2 Cloverdale is hosting No. 7 Moreau Catholic on Saturday afternoon.  Cloverdale, the NCL I champions, is 20-3 on the season.  One of the losses was to No. 1 seed Salesian, the other to Petaluma.

They had a first round bye, so this is the Eagles first playoff game.

Moreau Catholic started the season with four win, then lost six of seven and has been hovering around .500 most of the year.

Cardinal Newman got the benefit of the doubt of being in a league of larger schools to get a No. 3 seed.   They had one bad streak of losing eight of ten and gave up at least ten runs in five of the games.

No. 7 St. Patrick-St. Vincent comes to town Friday afternoon.  After spending most of the season around .500, they have won six of seven.

After a first round bye, the No. 2 seed and defending champion St. Vincent is in action for the first time with a home game against No. 7 St. Joseph-Notre Dame on Friday afternoon. After a 0-6 start, they have won 14 of 16.

This is a five team bracket and sees its first action on Saturday when No. 5 Anderson Valley travels to No. 4 Tomales.    Both teams need a win to get its record up to .500.  They met in the pre-season with Tomales taking a 14-3 win.

The first three seeds don’t get into the action until next week.   The Anderson Valley-Tomales winner travel to No. 1 and defending champion Ferndale next week.  Tomales won this division two years ago.