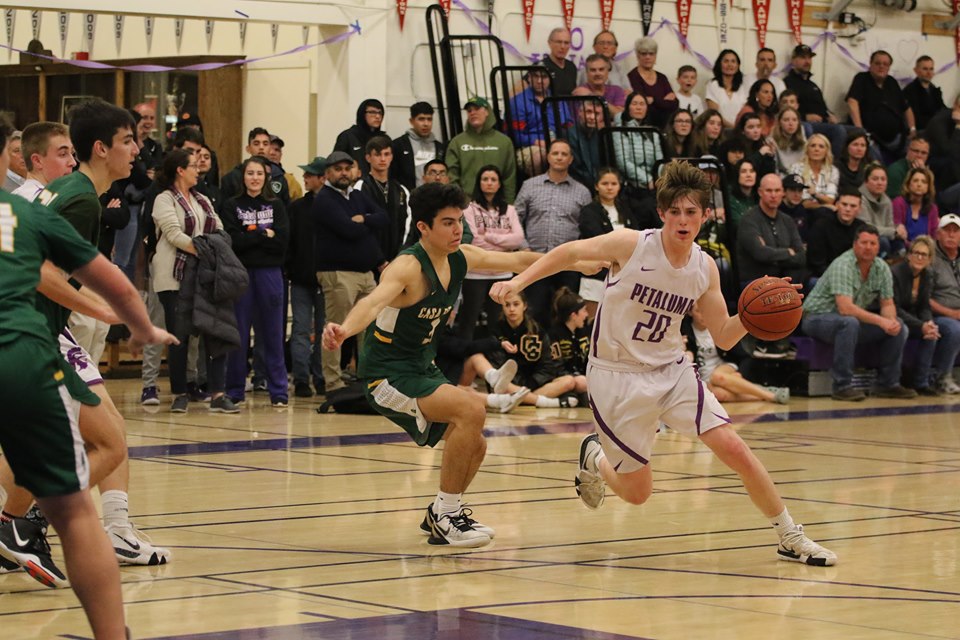 FEATURE IMAGE ABOVE BY DWIGHT SUGIOKA.

The NCS brackets have come out, so let’s break down who from the North Bay will be representing in the postseason.

This division has by far the most local teams involved, so it will be the longest summary.

Cardinal Newman is the highest seeded team, sitting at seventh, hosting 10th seeded Montgomery. The Cardinals are 2-1 against their rivals this year, most recently beating them 52-43 in the NBL-Oak Semi Finals. The Cardinals will rely on big man Trevor Smith and Giancarlo Woods, who had 14 points in the NBL-Oak Championship game loss to Piner. For the Vikings, it’ll be Nolan Bessire to try and keep up with the Cardinals. In the two teams last meeting that took place at Cardinal Newman, Montgomery came away with a 61-45 victory.

We now go to 8th seeded Tamalpais, who host 9th seeded Acalanes. The Red-Tailed Hawks sport an 18-9 record under coach Tim Morgan, and went 12-4 in MCAL play. They finished in third in the league, with their four losses coming to the 2 top teams, Marin Catholic and Branson. All league players Tyler Reed and Dylan Reed will hope to get the Hawks back to the quarterfinals for the 4th consecutive year.

Since we have already covered Montgomery, we will head over to 12th seeded Redwood. A late season push by the Giants had them qualify for the NCS playoffs at the buzzer with a 61-47 win over San Marin on the final night of the regular season. In total, they have won 3 of their last 4 games, and will travel Alameda Tuesday night. The Giants will be led by Senior Leader Pasquale Ancona to try and upset the favored Hornets on the road.

13th Santa Rosa is next on the list. They’re lead by all around athlete Isidro Garcia, with help from sharpshooter Tyler Edwards. The Panthers missed the NBL-Oak playoffs, so this will be their first action since February 7th. Head Coach Madison Lott always has his teams prepared and playing hard, so their game with 4th seeded Las Lomas should be an interesting one to follow.

Next up is 14th seed and Vine Valley Athletic League Champion Vintage. The Crushers clinched the VVAL championship on February 7th with their win over rival Napa, and Petaluma’s loss to American Canyon. Vintage finished league play 10-2, while going 6-0 in the second half of the league season. Coach Ben Gongora brought the schools first league championship in 20 years. They’ll have their hands full with Washington-Fremont, who won the MVL with Moreau Catholic. The Crushers will need the help of Imani Lopez and Logan Nothmann. Nothmann just came back from injury a few weeks ago. Washington is the 3 seed.

Petaluma sneaks into the bracket for the first time since 2016-2017, when coach Scott Behrs had taken them to 2 straight appearances.  New coach Anton Lyons has the Trojans at 17-9, but have lost 4 of their last 6 games. The Trojans will travel to 2nd seeded De Anza. Petaluma will be led by Esteban Bermudez, who is recovering from an illness that kept him out for four games. Liam Gottschall and Alex Siedler will also be key contributers inside. Gottschall can shoot from the outside as well, hitting a game winning three pointer at the buzzer against Napa last Wednesday.

Branson was left out of the Open Division bracket, which drew some surprise around the area, especially since they had just wrapped up their 3rd straight MCAL Championship. Branson has had to overcome some of the worst adversity anyone could face when they lost multi-sport athlete Kwentyn Wiggins to a car accident back in the Summer. The theme of “All For You” has been a staple for the Bulls season.

Since they did not draw an Open Division bid, they settle for being the undisputed number 1 seed in Division 3. The MCAL champions will host Pinole Valley at the College of Marin. They’ll look to get back to the Nor Cal Tournament, where they lost in the Nor Cal Division 1 Championship last year to James Logan, just one game away from going to the State Championship at Golden 1 Center. Back for the Bulls as they begin that quest Tuesday is MCAL Player of the Year Peyton Mullarkey. He scored 15 points in their MCAL Championship win over Marin Catholic last Friday. They’ll also look for Miles Keefe to be a factor. The first team all MCAL junior scored 12 points, but also played lockdown defense on Marin Catholic’s stud sophomore Kyle Winters, holding him to just two points last Friday.

4th Seeded Piner comes in with a 25-2 record, one of head coach Mike Erickson’s best squads ever. Senior guard Adonis Gutierrez scored 33 points in their NBL-Oak championship game win over Cardinal Newman. 22 of his points came in the final 11:30 of the game. Piner also got 17 points from senior guard Jared Sadler. Isaac Torres, a 1,000 yard wide receiver on the Piner football team, had eight points and a game-high 10 rebounds in the same win. These are the Prospectors to watch for. Perhaps, a semi final match-up with #1 seed Branson could be in order a week from Tuesday.

Piner’s opponent, Sonoma Valley matches up two old Sonoma County League foes. The two teams already met this year back on November 30th, with Piner taking a 61-52 decision. The Dragons finished tied for second place in the VVAL with Petaluma. Sonoma Valley comes into the playoffs at 16-10 under coach Mike Boles who is in his 5th season at the helm. Dragons will be led by sophomore Dom Girish, who averages 19 points/game. Girish recorded 12 points in their final regular season win, a victory over Casa Grande. Another sophomore, Anders Mathison had 24 points in that game against Casa Grande, and has been one of the Dragon sharpshooters this season.

Drake, seeded 6th will hope that their sophomore trio of Will Heimbrodt, Jonas Salk, and Sachem Ramos will be on both offensively and defensively when the Pirates host Encinal. Drake finished 11-15 overall.

San Rafael finshed under .500 both overall and in league, but a good in division record has the Bulldogs in the NCS playoffs. 4 straight losses for San Rafael has them reeling heading into it, but hopes that Drew Caveny and Hayden Hattenbach can give Miramonte a formidable challenge on Tuesday night.

Novato grabbed the 14th seed in Division 3, and will travel to St. Joseph Notre Dame on Tuesday night. The Hornets head into it with one of the MCAL’s all time leading scorers on their side. Jason Carpenter is 4th all time on the MCAL scoring list, marking two Hornets in the top four.

Maria Carrillo lost their league championship game to Healdsburg on Saturday, so they had a quick turnaround to find out their opponent, which is St Patrick-St Vincent. The Pumas put together a 16-12 record, led by the sharpshooting of Austin Ehrlicher, Carson Jones, and Alex Dipman. They have also gotten spirited play from sophomore guard Kyle VanThof.

Marin Catholic drew the number 2 seed, yet they’re going to have to go on the road on Wednesday to Gateway. Kyle Winters will be the key for the Wildcats in their quest for an NCS Championship.

Justin Siena, fresh off of their upset of Petaluma, will travel to 4th seeded University for round one.

Middletown secured a 12 seed in the postseason, and travels to Del Norte on Wednesday.