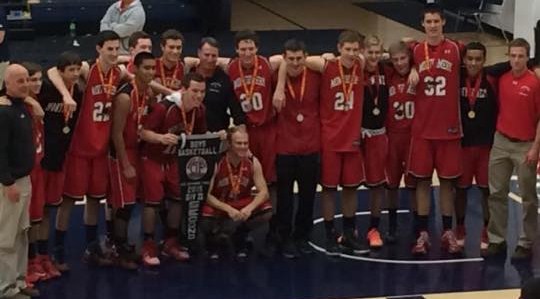 Who would you rather be this morning, a member of the Montgomery, or Archbishop Hanna Boys basketball team?


Both teams played for a North Coast Section championship on Saturday Night and both teams fell short.  One game didn’t have much suspense after a close first half, the other looked like a winner most of the game, before losing in the last moments.
Montgomery was the team that was in the game for the first half, before things slipped away in the second half in a 71-57 loss to El Cerrito, in the Division 2 championship game that was played at St. Mary’s College in Moraga.
In a close first half, a couple of things happen before halftime  that didn’t go Montgomery’s way and yet they were right in the game.  With four and a half minutes left and the score tied at 19, Eric Poulsen picked up his third foul, and sat out the rest of the half.  Poulsen still scored a team high 21 points.  Montgomery hung in without its 6’ 11” center, and had the lead late, but an 8-2 run in the last two minutes, the last three on an off balance buzzer beater by Tyler Alcor,n which made it 29-26, gave El Cerrito the lead for good.  It was one of four 3’s that Alcorn hit on the night, on his way to a 20 point game.
An 8-0 run midway through the third quarter gave El Cerrito control of the game that they wouldn’t lose.  A Carlos Johnson slam dunk with less than two minutes to go made it 45-34, and Montgomery wouldn’t be within double figures the rest of the way.  Johnson scored 10 of his game high 22 points in the decisive third quarter.
The slim hope going into the fourth quarter was dashed with a 6-0 El Cerrito run that started the quarter.
Michael Septimo scored 17 for Montgomery, who drops to 21-11 on the season.  They now wait for the Nor Cal pairing which come out Sunday afternoon.  The guess is they will be set up for at least one home game.
For El Cerrito, it turned out to be a good move to move up to Division 2.  After so many near misses over the last few seasons in Division 3, they win their first section championship since 2003 and raise their record to 29-3.  It  appears Montgomery will not have to worry about them in the Nor Cal playoffs, because for the second straight season El Cerrito will be moved into the Open Division.
As for Archbishop Hanna, they first had to make the long trip to Eureka to play on the home court of No. 1 seed St. Bernard Catholic in an attempt to win their first ever NCS Championship.
It all started off so well.  Archbishop Hanna dominated the beginning of the game, jumping out to a 29-14 lead early in the second quarter.  Armani Perry was on his way to a game in which legends are made of, ending with 36 points.
St. Bernard Catholic then went on a 10-0 run to get back into the game.  Archbishop Hanna did maintain, what appeared to be control.  They had an 11 point lead with six minutes left, when Perry fouled out of the game.  Fouls would be an issue the whole game.  St. Bernard Catholic shot 46 free throws in the game.
As the fourth quarter moved on, St. Bernard Catholic snuck back closer.  It was 60-53 with less than five minutes left, 61-56 with less than.  A 14-5 run to end the game, gave St. Bernard Catholic a 70-66 win.  St. Bernard Catholic went five of six from the free throw line in the last thirty seconds.
St. Bernard Catholic is 20-10 on the season and wins its first section crown since 2008, which is also the last time that they hit the twenty win mark.
Archbishop Hanna is now 24-5 on the season. They had a fourteen game winning streak snapped.  The last loss was in mid-January to St. Bernard Catholic.
Both teams will be advance to the Nor Cal version of the playoffs.