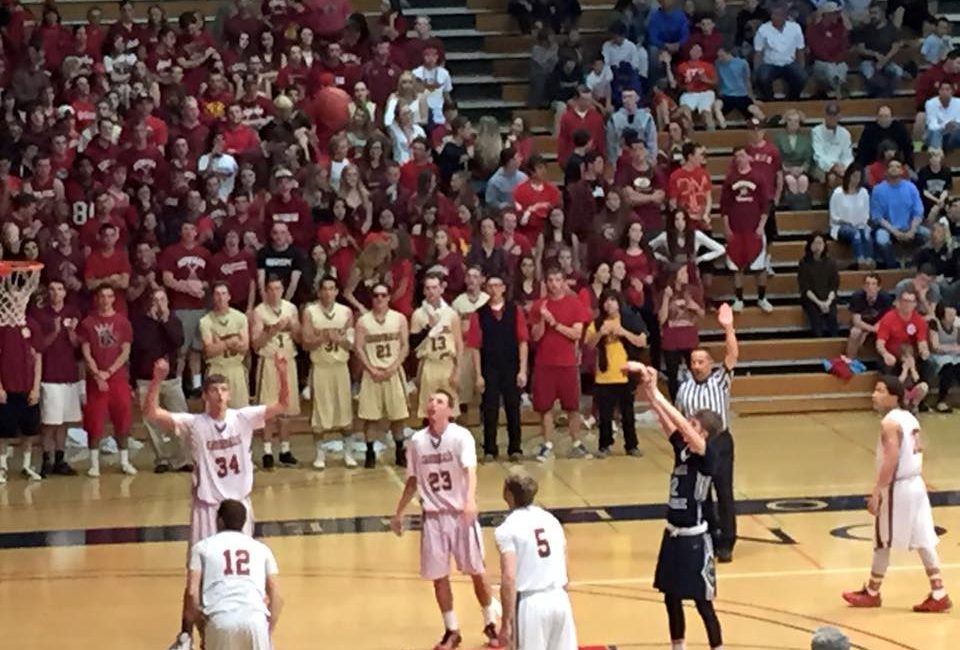 It had people wondering, “Who is this team?”.


Looking like a team that either got a late wakeup call, or has played too much basketball, Cardinal Newman got off to a start that was hard to watch.  Falling behind by as many as 20 in the first half, a late rally fell short and Marin Catholic took the North Coast Section Division 4 championship with a 61-54 win.
If any team deserved to look like a team that had played too much basketball, or have a late wakeup call, it would be Marin Catholic.  The team was playing its third straight road playoff game, although technically the game at SRJC was a neutral court, but they were the ones that came out firing.  Twenty seconds into the game, Andrew Panicacci drained a three pointer and they were off and running.
Cardinal Newman was just off.  It took them nearly four minutes to score, and they fell behind 14-3 with 2:40 to go in the quarter.  Shots that Cardinal Newman usually makes in their sleep weren’t falling.  Even when Cardinal Newman goes into a offensive slump, the defense usually bails them out but Marin Catholic was hitting nearly everything.
The way the start went for Cardinal Newman, was summed up in the last thirty seconds of the first quarter.  They were setting up for the last shot of the quarter that would have left them in pretty good shape, considering the start.  But as it was most of the night, the timing was off.  They missed a three pointer and gave Marin Catholic enough time to get Joey Calcaterra to throw up a 35 foot three pointer at the buzzer, which he made to make it 21-11 after one.  It was the second time all season Cardinal Newman gave up 20 points in a quarter.
It didn’t go much better in the second.  A 8-0 run to start the second quarter was ended by back to back dunks. Moments later Panicacci hit his second three of the game and with three minutes left in the half, Marin Catholic had a 36-16 lead.
You could say that most of the Cardinal Newman faithful was in shock.

The crowd did get some life when Cardinal Newman scored the last eight points of the half to cut the lead to 12. They had the lead down to ten twice early in the third quarter, but another trend began to show that this wasn’t the Cardinal Newman team that we were used to seeing.  Usually a good free throw shooting team, they went through a stretch in the third quarter hitting four of ten.  In one thirty second period, they missed three of four.
When Frankie Calaterra returned a missed shot, Marin Catholic had a 50-34 lead with 1:30 to go in the third quarter and it felt over.

That is when the defensive side of the ball showed up for Cardinal Newman.  Marin Catholic wouldn’t score another field goal for the next nine minutes, but the Wildcats did get to the free throw line, and they did take advantage, hitting nine of eleven in the fourth quarter.
They needed them because as you knew they would, Cardinal Newman made a run.  Justin Botteri scored six of his team equaling high 17 points, to help get the lead down to 54-49 with three minutes to go.  It didn’t feel like a rally, but somehow Cardinal Newman was in position to steal the game.
It didn’t happen.
Cardinal Newman did have some open looks at a couple of threes to get closer, that just wouldn’t drop.  One did everything but go in.
Marin Catholic’s only fourth quarter field goal was by Jackson Snyder, which put the game away with thirty seconds left.
Sophomore Joey Calaterra, who is the Marin Catholic leading scorer on the season, scored a game high 18 points, nine of those in the first quarter to help the hot start, including the 35 foot three at the buzzer.  His brother Frankie added 15.
Twelve of the fifteen points Botteri scored were in the second half.  He also had a game high ten rebounds.  Connor Rubbatitino also scored fifteen points and Damian Wallace added 14.
Marin Catholic, who is now 22-10 on the season, was the No. 6 seed, which is the lowest seed to win the Division 4 bracket since 2003.  Hercules won it that season and coincidentally they defeated No. 1 Marin Catholic 58-46.  The lowest besides that since is No. 3 which has happened twice, including by Marin Catholic in 2005, which was their last title.
For Cardinal Newman,who is now 29-3 on the season, the NCS numbers continue to be frustrating.  Not only have they not won a section championship since 1993, but it is their fourth NCS championship game loss since 2006.
The good news out of that is that when they have lost that championship game, two of the three times they went all the way to the state championship game. They will try to start that journey on Wednesday when the Nor Cal playoffs begin. Cardinal Newman should be at home for the first round.  The official announcement for the pairings will be on Sunday.
My email address is jacpasquini@comcast.net
You can also now follow me at twitter @homer2612
Share