NCS First Round Sets Up Another Casa Grande-Cardinal Newman Game 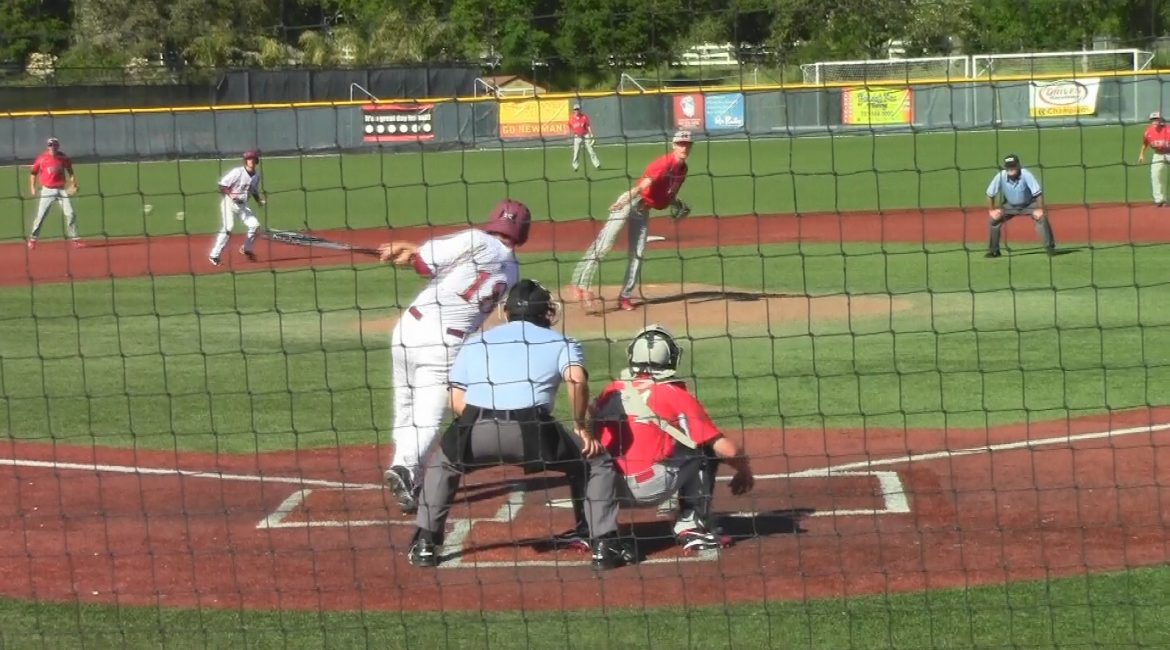 They just can’t get enough of each other.

Casa Grande and Cardinal Newman will meet for the fifth and final time.  This time in will be in the second round of the North Coast Section Division 2 playoffs.  The game will be Friday afternoon at Casa Grande High School.

The game was set up because both teams started the playoffs with a 4-1 win.

No. 1 Casa Grande got its win over No. 16 Pinole Valley behind another outstanding performance by starting pitcher Anthony Bender.   Pinole Valley scored an unearned run in the first and then nothing after that.  Bender gave up four hits, striking out nine and raised his season record to 10-0.  He also has two saves during a season in which he has given up two earned runs in over 53 innings for an ERA of 0.26.

After tying the game in the second, Casa Grande came up with the winning rally in the fifth scoring three times.  Nate Bill made it 2-1 with an RBI single, which was follow by a two out two run single by Charlie Parnow for some breathing room.

Casa Grande raises its record to 25-2.

Cardinal Newman is 15-12 after its win over Alameda.   The No. 8 seed got off to a good start.  George Foster hit a fly ball to center for Cardinal Newman’s first out of the game.  The fly ball came with the bases loaded and scored a run which made it 2-0 Cardinals, which turned out would be enough.

In his first start of the season, Zak Faber came within one out of a complete game, giving up four hits and picked up his first win.  Faber spend most of the season as the closer and his longest stint before the Tuesday playoff game was 3 2/3 innings.  The closer for this game Corey Hammell and he did his job by striking out the only batter he faced to end the game.

The first four batters singled for Cardinal Newman, the last by Ricky Clark which brought in the first run.  That was followed by Foster’s sacrifice fly.

Cardinal Newman didn’t do much more on offense after that, getting three hits the rest of the way.  One of them was a two run single by Ray Hernandez in the fifth.  That was after Alameda had committed two errors with two outs that kept the inning going and Hernandez made them pay.

Alameda had its chances, leaving ten men on base.   The best chance was the fourth when they had the bases loaded with one out.   Alex Roeser caught a fly ball and threw a runner out at the plate with a perfect throw.  Alameda would leave two runners on in each of the last three innings.

The other North Bay League team in action was not so fortunate.   Montgomery lost to Campolindo 2-0.   Trent Shelton pitched a complete game three hitter and hit a sacrifice fly for Campolindo who is the No. 2 seed and three time defending champion and has won thirteen straight.

The other two NBL teams are in action today (Wednesday), one at home the other on the road.

Maria Carrillo is hosting Concord in a game between two teams that had good size winning streaks snapped recently.

Maria Carrillo had a six game streak before losing to Cardinal Newman in the first round of the NBL post season tournament.

Concord, who came in third in the Diablo Valley League, had a nine game winning streak snapped by back to back losses to league champion Clayton Valley to end the regular season.  Clayton Valley is the No. 3 seed and won its first round game on Tuesday.

Pitching was the theme of day one and it wasn’t any different for SCL Champion and the Division 3 No. 3 Analy in its 2-0 win over No. 14 Hercules.

Garrett Hill and Cristian Sadler put on a pitching show before Analy scored single runs in the fifth and sixth.  Jacob McKnight, who threw a runner out at the plate in the third inning, came up with a clutch two out single in the fifth to bring in run number one.

Garrett Hill put on a masterful performance, pitching a two hitter and strikeout a season high 12 to raise his season record to 9-0.  It was Hill’s sixth complete game of the season and is fourth shutout.

Analy will host No. 6 Alhambra on Friday afternoon in the second round.

The other two SCL teams in Division 3, Sonoma Valley and Piner, play its first round games today (Wednesday) and if things work out they could be playing each other in Round 2.

No. 4 Sonoma Valley hosts a night game against Encinal at Arnold Field.  Meanwhile No. 12 Piner is at No. 5 El Cerrito.

The local softball world also gets its playoffs going on Wednesday.  The schedule includes SCL and NBL champions Petaluma and Maria Carrillo.

Petaluma, the No. 1 seed in Division 2, will try to make it twenty five straight wins when it hosts No. 16 San Lorenzo, who is 14-11 on the season.

No. 6 Maria Carrillo goes for its 20th win of the season and raise its winning streak to thirteen with a home game against No. 11 Newark Memorial.

Newark Memorial finished in second in the Mission Valley League.  The champion Logan went 14-0 in league play, was 23-1 overall and is the No. 3 seed in Division 1.   Three of Logan’s wins were against Newark Memorial, who also lost to Casa Grande earlier this season 2-1.

Four other North Bay League teams are in action.  Two of them are in Division 2 and both on the road.

No. 9 Rancho Cotate is at No. 8 Livermore and No. 12 Casa Grande goes on the road to meet No. 5 Pinole Valley.

The other two teams are in two other divisions, one on the road and the other at home.

Santa Rosa is the No. 9 seed in Division 1 and travels to No. 8 San Ramon Valley.

Cardinal Newman, the No. 3 seed in Division 4, hosts John Swett.   No. 1 Salesian and No. 2 Cloverdale have first round byes.

No. 8 Cardinal Newman at No. 1 Casa Grande…Friday at 4 pm

No. 7 Kelseyville at No. 2 Justin Siena…Friday 4 pm