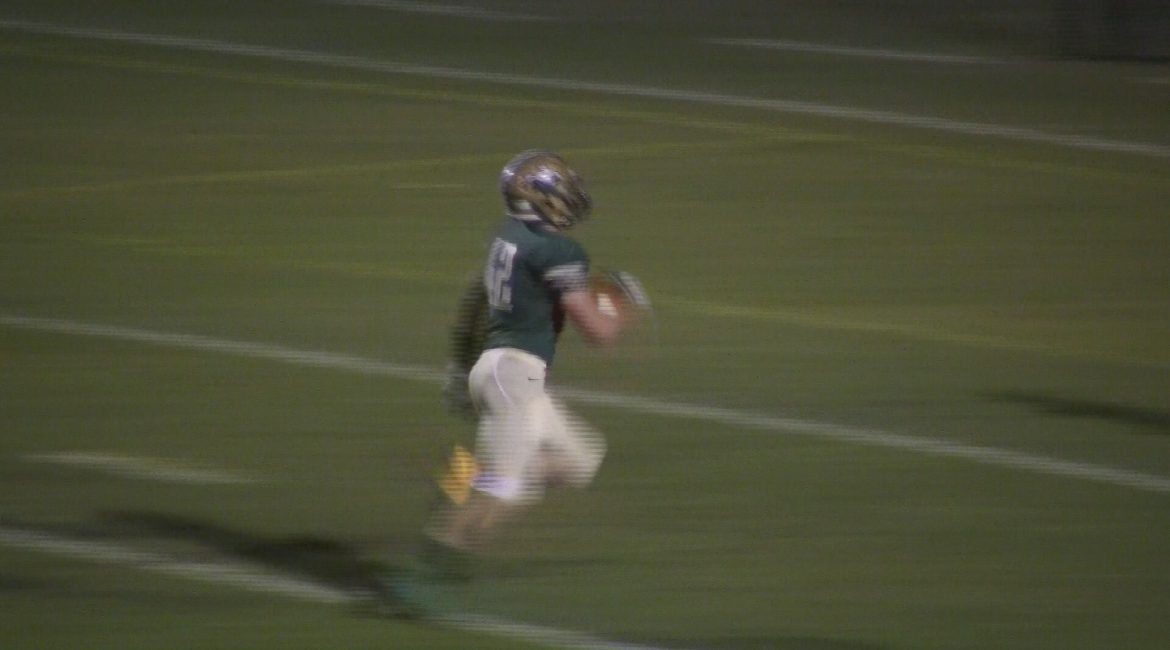 Now that the first round is out of the way, we can get down to some serious football.

As expected there wasn’t much suspense for the top seeds.

Three of the five No. 1 seeds had first round byes.  For the two that had to play the competition wasn’t much tougher, they won by scores of 45-14 and 37-0.

You could pile on to that but why bother.

Casa Grande had a 45-0 lead at the half in its win over Alameda.  John Porchivina rushed for 97 yards and two touchdowns and JaJuan Lawson threw three and rushed for one more.

The biggest concern for Casa Grande is the kicking game.  Casa Grande missed on four conversion attempts (two kicks, two going for two) on the night.  That is as many as Matt Abramo missed the whole season.  Abramo, who is also 10-16 in field goal attempts with the long a 44 yarder, has a pulled muscle and has missed the last two games.  The Gauchos are hoping to have him back next week.

Casa Grande will host its old SCL and current NBL foe Windsor in the second round next Saturday NIght.

Montgomery got its expected second round matchup with Concord, who scored two touchdowns in the last four minutes of the second quarter to take control at 30-9 in its win over Newark Memorial.

Concord will be at Montgomery Friday Night.

The Cardinal Newman–Analy game is set and will be next Friday and be broadcast on KSRO 1350.

Cardinal Newman didn’t score an offensive touchdown in the first quarter and still led 15-0.   A bad snap on a punt for a safety was the first score.  Kevin Lucey then took that free kick 70 yards and it was 8-0 three minutes into the game.  That turned out to be enough scoring. Sir Francis Drake issues with the punting game continued when they had another one blocked for a touchdown.

The Cardinal Newman offense did get into the act.  Quarterback Keaton Dunston threw for 304 yards and three touchdowns.  By the time he did that the game was decided.

Sonoma Valley would like to play the last two minutes of the second quarter over again.  They were trailing 21-10 when Casey Harrington threw 40 and 50 yard touchdown passes to Brett Merrell to put the game away.

After giving up 28 points in the first quarter, Fort Bragg did all its scoring in the fourth and ends the season 5-6.

St. Mary’s will be at St. Helena Friday Night.

Healdsburg found out they will host No. 11 Del Norte.

After the way they were dominated, especially in the first half, it was hard to believe that St. Vincent had the ball with six minutes left with a chance to tie its game with Salesian. They weren’t able to tie it and Salesian made the score more how the game was played by scoring two touchdowns, the last on a 91 yard interception return by Preston Reed in the last twenty second.

The drive the Mustangs had a chance to tie the game also ended in an interception and set up the touchdown that put the game away with 4:20 left.

Salesian dominated the first half.  St. Vincent scored on its second offensive play of the game on a swing pass from Jack Richardson to Patrick Garcia that went 53 yards.

By then the tone of the game had been set.  After taking the opening kickoff Salesian went on an 84 yard-13 play drive to take a 7-0 lead.

After St. Vincent answered with its touchdown, Salesian went on another long drive.  The biggest problem they had on the day was snaps, which they bobbled at least four, and on this one they lost the ball to St. Vincent.

It wasn’t long before they had the ball again and went on a 12 play 73 yard drive that was capped by an 11 yard run by De’Angelo Hernandez who rushed for 223 yards on the game.

In the first half Salesian ran 47 ]of the 59 offensive plays and had 15 of the sixteen first downs.  Take away the touchdown play and they outgained St. Vincent 279-3.

Still they had a chance to get into the locker room behind 14-7 but Salesian hit a fourth and goal nine yard pass play to Nakota Shepard-Greer who made a nice diving catch to give Salesian a 21-7 halftime lead.

St. Vincent was a different team in the second half.   They took the opening drive and scored on a 28 yard by Derek Murphy to cut it to 21-14 and then recovered an onside kick.   They couldn’t get a first down and was forced to punt and three plays later Hernandez went 51 yards for his second score to regain control for Salesian at 28-14.  Hernandez led a rushing offense that went over 400 yards on the day.

Salesian will be at No. 1 Middletown Friday Night.

The season ended two weeks to late for Calistoga.  After the 8-0 start they lost the NCL II/Bay Football League championship game to St. Vincent last week and then went to Ferndale and lost its NCS playoff game.

Kyle Chambers rushed for 210 yards and four touchdowns to lead Ferndale.   Two of those were in the first half and Ferndale also had an interception return for a score to take a 23-0 lead one minute into the second quarter.

Calistoga scored right before the half on a 45 yard fumble return by Walker Hughes to make it a 29-14 halftime score.

The game was decided early in the third quarter when Ferndale went on a 13 play 71 yard drive for one score and Ike Townsend picked up a bad lateral and went 45 yards to make it 43-14.

Despite the loss Dylan Alvardo ends a season in which he rewrote the Calistoga record book by rushing for 72 yards on two touchdowns.  That gives him over 1,900 yards and 25 touchdowns on the season,which is both school records.  He also had a 270 yard game earlier this season that broke the school record.   The following week he went for 407 to re-break it.

Ferndale, who is the defending Division 5 champions, travels to Chabot College next Friday Night to meet Valley Christian.

After ending the regular season 6-4, SRJC hopes to get a bowl invite today.

Butte won the Nor Cal race and ends the regular season 10-0 with a 47-18 win over San Francisco.

San Mateo’s only loss was to Butte on November 2nd 28-20.  It was the only game all season that Butte didn’t win by at least 28 points.

Lucas Janetos scored both goals and assisted on the first one.

One thing this rivalry tells us is that there isn’t much a difference between the No. 1 and 15 teams in the country.  Maria Carrillo handed Montgomery all three losses this season in one goal games.

There was a difference in this game.  Montgomery led in the first two, but didn’t in this one.

Madison Gonzales scored in the first half to give Maria Carrillo a 2-0 lead and that turned out to be the game winner.

Maria Carrillo wins its third straight NCS championship.  All three championship wins were over Montgomery.  The Pumas end 20-0-1 on the season and the No. 1 ranked team in the country.

Savannah Stoughton scored three goals to lead Sonoma Academy to its first section championship since 2009 and ends the season 21-1.

Middletown, who was the defending section champions, ends 19-3.