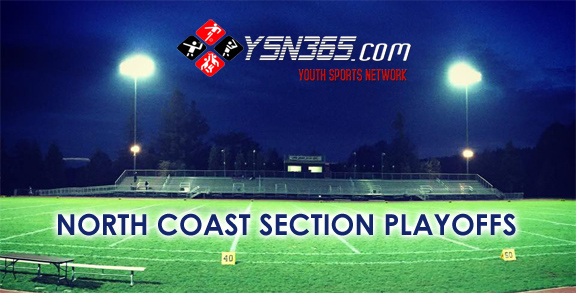 The first day of NCS play was good for most of the local teams and all the NBL teams, as all three advance to the second round after one sided wins.
Today, the first round ends with nine local teams in action, four of them going against each other.
We have a recap of all the action last night along with today’s schedule and it is also NCS Soccer championship day, along with the second round of the Volleyball playoffs.  The schedule for both are at the end of this story.


DIVISION 2
No. 3 Windsor 35 No. 14 Dublin 9
No. 4 Maria Carrillo 49 No. 13 American 13
No. 1 Clayton Valley 61 No. 16 Newark Memorial 7
No. 2 Concord 60 No. 15 Hayward 26
Both NBL teams got off to a slow start, but once they got going, they got going in a big way.  Each team used one big quarter to propel them to the second round with a stress free fourth quarter.
Actually when saying it took a while to get going ,we are talking about the offense.  The defenses kept things under control until the offense put things away.
For Windsor that is nothing new.    They are the only team in the NBL that has given up less than 20 points a game.  Although Dublin did move the ball the first two times they had possession, all they could get was a field goal, to take a 3-0 lead early in the second quarter.  The field goal was a wake-up call and by the time the game got to half time, it was basically over.
Windsor would score four touchdowns by the half.  The scoring barrage was led by Jalen Roman who had a hand in all four scores and he did it several ways, including returning a fumble 32 yards that really gave control of the game to Windsor. The fumble return came after Roman had run one in from 5 yards out and threw another from 8.
Roman would end up with 97 yards rushing and score another touchdown in the third quarter which would end the scoring.  It was a typical game for Roman, who is well over the 1,000 yard mark in both passing and rushing on the season.
After that the defense took care of things as Windsor easily snapped a three game losing streak and raised its record to 8-3.   Actually, considering that they are a No. 3 seed and meeting a team that had lost six of seven, it is the kind of win that you would hope for as a confidence booster moving on.   Windsor will host the winner of today’s Pinole Valley-Tennyson game next Saturday.
Maria Carrillo had a familiar name take control of its game.   Alex Netherda, who was well over 1,000 yards rushing on the season going into the game (Maria Carrillo doesn’t keep team stats), but after this game there is a good chance he is pushing 2,000.
Netherda rushed for 262 yards and four touchdowns as Maria Carrillo defeated American 49-13.

Netherda and the Pumas did the majority of their damage in the third quarter when they scored five touchdowns to break open a close game.
That came after a worrisome end of the first half.   Netherda already had touchdown run number one and Walker Rotherham added a touchdown pass to Shawn Pebros to give them a 14-0 lead.   After turning the ball over on downs late in the second quarter, American drove to score a touchdown on the last play of the half to cut the lead to 14-7.
It didn’t take long to realize the momentum American had was really nothing.
The Netherda show really kicked in and it didn’t take long, on the second play of the third quarter he went 35 yards to get that touchdown back and then two minutes later went 49 yards for another one and just like that Maria Carrillo was in control 28-7.  They weren’t finished yet and Netherda wasn’t the only part of this show.  Rotherman scored from 2 yards out and Josh Groesback scored on a 56 yard run and the route was on.
American made one last stand, driving to the one yard line.  As the rest of the third quarter went for them, that didn’t work out well either as they mishandled a snap and Maria Carrillo recovered.
Two plays later, Netherda delivered the exclamation point with a 91 yard run, which was the fifth Maria Carrillo touchdown of the third quarter, a 49-7 lead and a running clock for the fourth quarter.
Maria Carrillo has won five of six, has hit the 40 point mark in three straight and is 7-4 on the season.  The seven wins equals how many wins they had in 2010.  Maria Carrillo hasn’t hit the eight win mark since 2005 which is the best year in school history.   They will get to try to match that next week.
Watch the VIDEO HIGHLIGHTS click here

No. 11 Pinole Valley (4-6) at No. 6 Tennyson (5-4-1)…1 PM
CALPREPS PROJECTION:  Tennyson by 10
DIVISION OVERVIEW…Maria Carrillo will host the winner of tonight’s Miramonte –Casa Grande game.   According to the North Coast Website that game will be played on Saturday as will the game Windsor is hosting…As expected no problem for Clayton Valley and Concord…They will host the other two games on Friday.  The winner of tonight’s Mt. Eden-Montgomery game will travel to Clayton Valley…Notice in the Miramonte-Casa Grande game, which is a No. 12 vs. No. 5 matchup, No. 12 (Miramonte) is a two point favorite.

DIVISION 3
No. 7 Rancho Cotate 38 No. 10 Kennedy (Fremont) 13
No. 6 Alhambra 34 No. 11 Petaluma 14
No. 1 Campolindo 52 No. 16 Ygnacio Valley 14
No. 5 Acalanes 49 No. 12 Bishop O’ Dowd 20
With all the distractions for Rancho Cotate with the weird tie-breaking system and having to go on the road because of the league championship rule, that they thought they deserved, you might have thought there was a chance that they would feel sorry for themselves.  Instead they showed why they are a co NBL champion, going on the road and handing JFK of Fremont its first loss on the year in dominating fashion, 38-13.
Junior quarterback Gunner Mefferd threw for 215 yards and four touchdowns to lead a relentless Cougar offense.   Two touchdown passes were to Chris Taylor-Yamanoha.  The first one opened the scoring.  The second was all over the area’s Twitter pages on what kind of catch it was.  To quote the PD in its version of the catch, “Taylor-Yamanoha making a spectacular one-handed grab in the end zone on the prettiest 2-yard gain you could imagine”.
That pretty sums up the game on how well Rancho Cotate played.  Joey Trono also caught two touchdown passes and Carlos Franco added a 67 yard run for another score.
Rancho Cotate had over 400 yards in total offense in the first half against a defense that has averaged giving up barely 200 a game on the season.
The game was still fairly close in the third quarter, with Rancho Cotate holding a 20-7 lead.  JFK went on a nice drive before the Rancho Cotate defense held them on downs at the 30.   The next drive ended on Trono’s second touchdown catch and made it a 27-7.
So with all the bad breaks and with the league championship tie-breaker and seeding controversy, Rancho Cotate is where they were hoping to be and that is in a second round game.
It wasn’t all good news in the division.  Petaluma hung tough with Alhambra before dropping a 34-14 decision.  Alhambra broke away from a 14-14 tie midway in the third quarter.
Running back Yusef Kawasami  ended a super season rushing for 100 yards.  It is the fifth time in six games he has reached the 100 yard mark and puts him over the 1,200 yard mark for the season.
Luke Wheless had a 64 yard touchdown run in the third quarter to tie the game at 14.
Petaluma ends the season 7-4.  The Trojans continue a steady improvement from a 1-9 record in 2011.  It is the second straight season they have made the NCS Playoffs.
SATURDAY
No. 13 El Cerrito (5-5) at No. 4 Analy (9-1)
CALPREPS PROJECTION:  Analy by 8

DIVISION 5
No. 3 St. Helena 45 No. 14 South Fork 18
No. 5 Stellar Prep 34 No. 12 Valley Christian 20
St. Helena carried a big third quarter to a 45-18 win over South Fork.
The lead was 10-6 at halftime.  St. Helena put it away with three touchdowns. Quarterback Jack Preston threw for two and ran in the other.
The game turned St. Helena’s way midway the third quarter.  It was heading that way when Preston threw his first touchdown of the quarter to make it 17-6.  On the next possession, Cole Lyon intercepted a pass and returned it 31 yards to the six yard line, which set up the rushing touchdown by Preston.
Preston led an offense that gained nearly 500 yards including 301 on the ground.  Preston passed for 186 yards and the two touchdowns and rushed for 89 more.  That gives him over 2,400 yards of total yards on the season which breaks a St. Helena single season record.
St. Helena is now 10-1 on the season.
SATURDAY
No. 8 Cloverdale at No. 9 St. Vincent…1 PM
CALPREPS PROJECTION:  Cloverdale by 12

No. 13 Tomales at No. 4 Middletown…7 PM
CALPREPS PROJECTION:  Middletown by 35

JC FOOTBALL
No. 14 Diablo Valley 44 No. 10 SRJC 41
There are no stats from this game at this time.
SRJC jumped out to an early 14-0 lead and still led 27-18 in the third quarter.
It sounds like a disappointing loss for SRJC who finishes the regular season 7-4.  Bowl game schedules will be announced on Sunday.

NCS SOCCER CHAMPIONSHIP DAY
BOYS
DIVISION 1
No. 4 Montgomery (14-5-4) at No.3 Terra Linda(14-2-6)…2:30pm
Montgomery has won both of its playoff games on penalty kicks, including the epic 14-13 win over Santa Rosa last Saturday in the second round.
DIVISION 3
No. 2 Making Waves Academy (21-10 at No. 1 Anderson Valley…2 pm
Anderson Valley going for its fourth section championship in five season.