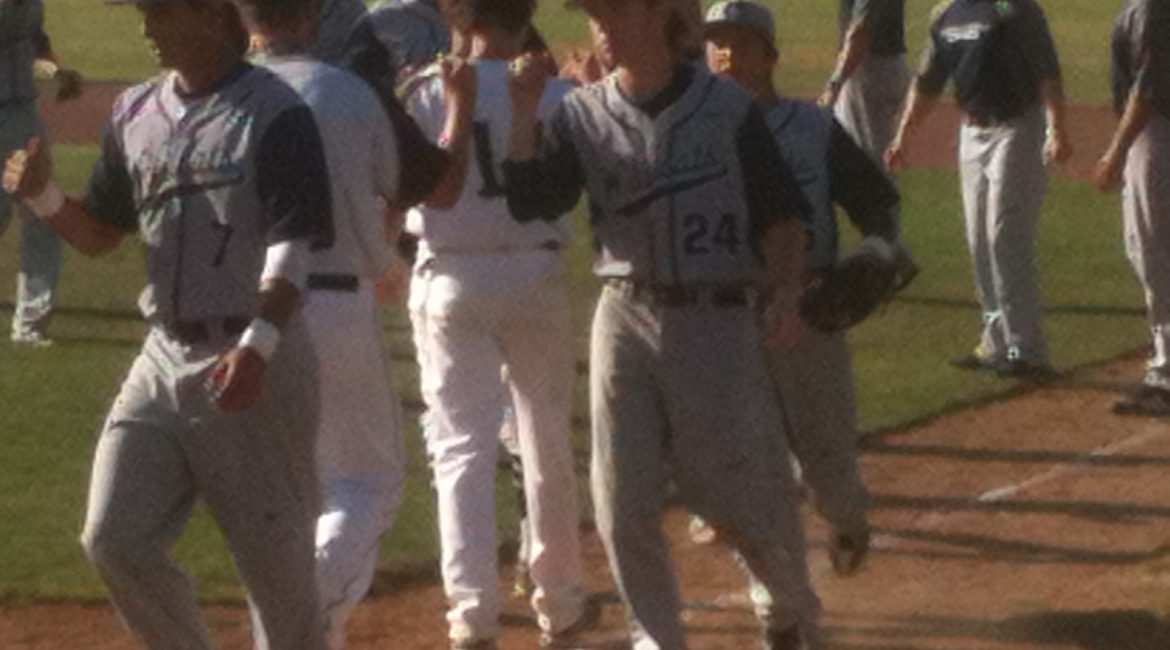 The great season had a lousy finish.

The Maria Carrillo Baseball team was three outs away from adding another notch to the school’s best baseball season ever.  It didn’t happen.   Instead they gave up three seventh inning runs and dropped a heartbreaking 5-4 loss to Marin Catholic, in the second round of the NCS Division 2 baseball playoffs.

Adding to the disappointment of the situation is that at least two of those three outs in the seventh inning were there to be taken and they only got one of them.   A lead off error on a routine ground ball to first base opened the door and after the Pumas did get the first out, Marin Catholic kicked the door in.

Marin Catholic started the fateful seventh with the top of the order.  Instead of having two outs and no one on with the heart of it coming up, they had a runner on first with one out.   Richie Epidendio followed with a single to put runners at first and second.    That brought up Mathew Tarantino, who is batting over.500 on the season and went into the game tied for the team lead in RBI.   On the first pitch he hit the hardest ball of the game, a solid drive down the left field line that one hopped the fence, and drove in two runs and just like that it was a 4-4 tie.    Bryant Jakiemiec, who kept Marin Catholic in the game with his pitching, followed with a base hit that scored Tarantino and Marin Catholic had the lead.   It wasn’t long after that they had the win, as Jakiemiec finished off his complete game and raised his season record to 11-1 by retiring Maria Carrillo in order in the bottom of the seventh.

The start of the game was pretty calm as Jakiemiec and Maria Carrillo starter Zach Scott put on quite a pitching duel.  Jakiemiec didn’t allow a hit for the first 3 1/3 innings and Scott retired the first eight batters he faced.

You could almost call Jakiemiec effectively wild.  He hit three Maria Carrillo batters.  Two of them were Keith Wallach.    The second time was in the head which delayed the game for about five minutes.   Wallach had dizziness, was removed from the game and was expected to get a concussion test after the game.

Two of the three hit batters, including when Wallach got hurt, led to runs.   It in the fourth, Andrew Vaughn was hit with one out.   Scott followed with a line single to right center, which was the Puma’s first hit and moved Vaughn to third.  Up came Peter Hoge who pushed a bunt down the third base line.   As the throw went to first for the second out, Vaughn broke for the plate and scored the first run.

Maria Carrillo added another run in the fifth on an RBI single by Jared Brazil and things were looking good for the Pumas.

The tone of the game changed in the sixth when Marin Catholic scored two to tie the game.  Maria Carrillo was one out from getting out of a second and third situation jam.   Scott had gotten out of two similar jams in the third and fourth innings.   This time he fell behind Sean Shepperd 2-0 and was removed from the game.  In came reliever Clayton Andrews and on his first pitch Shepperd hit a seeing eye bouncer that got through to center field and it was a tie game.

Things seemed to get back on track in the bottom of the sixth, when Maria Carrillo matched the two runs.   The rally started when Wallach got hit.  Andrew Vaughn followed with a single and then Vaughn and pinch runner Cole Martin pulled off a double steal, with Martin safe at third on a close play.  Scott followed with a sacrifice fly and a Hoge single gave Maria Carrillo back its two run lead.

Then came the faithful seven and the twenty two game winning streak and the season was over.

There will be a time when they will look back on a season that will always be remembered in Maria Carrillo history.   The 22 game winning streak, the 25-3 record and the first NBL championship in over a decade.   There will always be days they will remember all of that.

Then they will remember how it ended.

Outside the Montgomery win, it wasn’t a good day for the rest of the local teams, which includes Softball.   Five other teams, one baseball and four softball teams seasons end.  (Click on the link to watch video highlights of Montgomery’s win)

The baseball team is St. Vincent, the softball teams were all three from Division 2: Maria Carrillo, Petaluma and Rancho Cotate, along with Clear Lake in Division 4.

SATURDAY SCHEDULE (All games at 1 pm unless noted)

After its 3-2 win over Newark Memorial, Montgomery will be on the road in the semi-final meeting the winner of the Petaluma-College Park game.

The Casa Grande-Washington winner will travel to Marin Catholic on Wednesday.

BREAKING NEWS: Friday’s game between Cardinal Newman and Windsor has been cancelled due to COVID-19 issues within the Newman program. ... See MoreSee Less
View on Facebook
· Share

How do we get our game broadcast on YSN?LISTEN...then EMAIL us: [email protected] ... See MoreSee Less