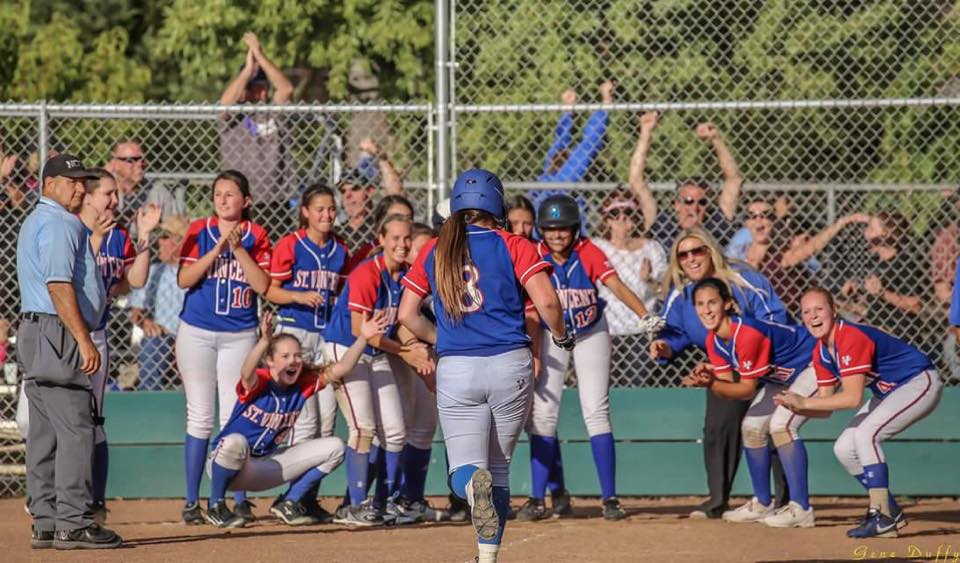 This time of the year is a busy time of the season for people in school, especially if you are a senior.  Graduation is in the plans among other things like a Senior Trip and other such events and of course there are those pesky little things like finals to prepare for.
Sometimes there is just too much going on, decisions have to be made.  Do I do this or not do that?
If you happen to participate in sports and your team is still going, you are in some pretty big events this time of season. They are events that are part of a successful season.
One of those events is the North Coast Section Softball playoffs. One decision had to be made by the seniors on the St. Vincent Softball team.  This weekend is the senior trip and the destination is Disneyland.  This is a trip I can relate to a bit, because that was my senior trip so many years ago.  I have only been back to Disneyland once since.
There was no right or wrong to this decision.  Four St. Vincent seniors informed the team on Monday, that if we win our first round game, we will be there for you for the second round game.


The first round game was won and the seniors were there.  Not only were they there, they were a big part of one of the most dramatic games of the season.  Senior Mary Cerf hit a two out two run homer in the top of the seventh to cap off a rally and give St. Vincent a 7-6 win over Calistoga in the second round of the North Coast Section Division 5 playoffs.
Early in the game, you wouldn’t blame the seniors if they were thinking that maybe Disneyland would have been the right move.  In the second inning, Calistoga’s Jenna Franquelin hit her seventh homer of the season and her second in eight days against St. Vincent for the first run of the game. One inning later, Calistoga sent ten men to the plate and scored five times to take a 6-0 lead.  All the runs were scored off Hannah Sarlatte, who is one of those seniors.
St. Vincent answered with four run fourth to get back into the game.  Junior Amanda Yaegar came in to settle things down and matching Calistoga pitcher Hailey Butcher towards the late part of the game.
It went to the seventh with Calistoga holding on to the 6-4 lead.  St. Vincent scored a run, but had two out and the bases empty.  Sarlatte reached first on an infield single.  Cerf followed on the first pitch with a blast over the left field fence to give St. Vincent the lead.  It was Cerf’s first homer of the season and third in over 240 at bats in her time at St. Vincent high school.  You could she was due, because she had one homer each in her sophomore and junior seasons.
Sarlatte came into the game and retired Calistoga in order in the bottom of the seventh to save the win for Yaegar to raise her record to 7-3.
St. Vincent turned the tables on Calistoga.  When the history of the season is written, one team can’t be mentioned without the other.  It was the fourth meeting of the season between the two.  In the first one, after St. Vincent scored two in the top of the seventh, Calistoga scored two in the bottom of the inning win by the same 7-6 score as the NCS playoff game.  St. Vincent won the second game, which turned out to force a tie-breaking game for the NCL II automatic spot in the NCS playoffs.  That was the game eight days ago, in which Calistoga scored five in the bottom of the sixth which was the difference in a 6-4 win.
Calistoga ends up 18-9 on the season along with a Co-NCL II championship.  They can’t shake St. Vincent. It is the two straight season they lost to them in the second round of the NCS Playoffs.
St. Vincent goes to 16-10 and will meet the winner of today’s Valley Christian-Clear Lake game in one of the Division 5 semi-final games.
St. Vincent was the only local team to win on Friday.  Two baseball and three other softball teams seasons came to an end. Eleven teams, six baseball and five softball, take it shots today.
FRIDAY RESULTS
BASEBALL
DIVISION 5
No. 3 Redwood Christian 3 No. 6 St. Vincent 2
No. 2 Branson 13 No. 10 Sonoma Academy 2
Redwood Christian scored all its run in the first two innings and held on.  The two teams combined for ten hits. St. Vincent’s George Sammon was the only player in the game that had two hits.
St. Vincent finishes the season 21-5.
At College of Marin, The Coyotes got off to a good start when Daniel Brown single and stole second.  Ethan Jones then doubled down the left field line to give Sonoma Academy a 1-0 lead.  The Bulls answered with 2 in the bottom of the first.
But later this game  had a very scary moment.  Branson’s Garrett Gabianelli was hit above the eye by a pitch.  The game was stopped for a half an hour as an ambulance was called and he was taken to the hospital.  The initial Cat Scan was negative.
The incident happened in the bottom of the second with Branson rallying.  As the inning continued, Branson scored eight times to put the game away.
Sonoma Academy, who won the school’s first NCS baseball game ever on Wednesday, ends 17-5.
SOFTBALL
DIVISION 2
No. 2 Alhambra 6 No. 10 Rancho Cotate 1
Two three run innings were to much to overcome for Rancho Cotate. The Cougars scored its only run in the seventh on a single by Jordan Ladner.
Rancho Cotate ends the season 21-7.
DIVISION 3
No. 4 Albany 1 No. 5 Analy 0
A tough loss for the Tigers. The only run was scored on a ground ball to first in the third inning.  The play started with a runner at second.  There was a collison between the first baseman and runner and both went down.  The runner from second came into score.
Analy lost the game despite outhitting Albany 8-3.
Analy ends the season 16-12.
DIVISION 4
No. 2 St. Patrick-St. Vincent 6 No. 7 Cardinal Newman 2
Cardinal Newman scored single runs in the first two innings to take an early lead.  They held that until a three run fourth. Emily Jaffe had three of Cardinal Newman’s five hits and scored one of the runs.
DIVISION 5
No. 5 St. Vincent 7 at No. 4 Calistoga 6
SATURDAY SCHEDULE
BASEBALL
DIVISION 2
No. 12 Pinole Valley (16-11-1) at No. 4 Casa Grande (21-6)… 1 pm
DIVISION 4
No. 10 Cloverdale (16-9) at No. 2 Justin Siena (14-10)…1 pm
No. 8 Stuart Hall (17-8) at No. 1 Clear Lake (25-0)…1 pm
DIVISION 6
SEMI-FINAL
No. 4 Tomales (11-8) at No. 1 Rincon Valley Christian (18-4)…1 pm
No. 3 Point Arena (11-6) at No. 2 St. Bernard Catholic (13-13)…4 pm
SOFTBALL
DIVISION 2
No. 8 Petaluma (24-3) at No. 1 Livermore (16-9)…2 pm
DIVISION 4
No. 5 Berean Christian (18-7-1) at No. 4 Cloverdale (20-4)…4 pm
No. 8 Lower Lake (19-6) vs. No. 1 Marin Catholic (21-3)…at College at Marin…2 pm
DIVISION 5
No. 9 Valley Christian (13-9) at No. 1 Clear Lake (17-6)…4 pm
DIVISION 6
CHAMPIONSHIP GAME
No. 2 Rincon Valley Christian (9-11) at No. 1 Laytonville (12-9)…2 pm
My email address is jacpasquini@comcast.net
Share