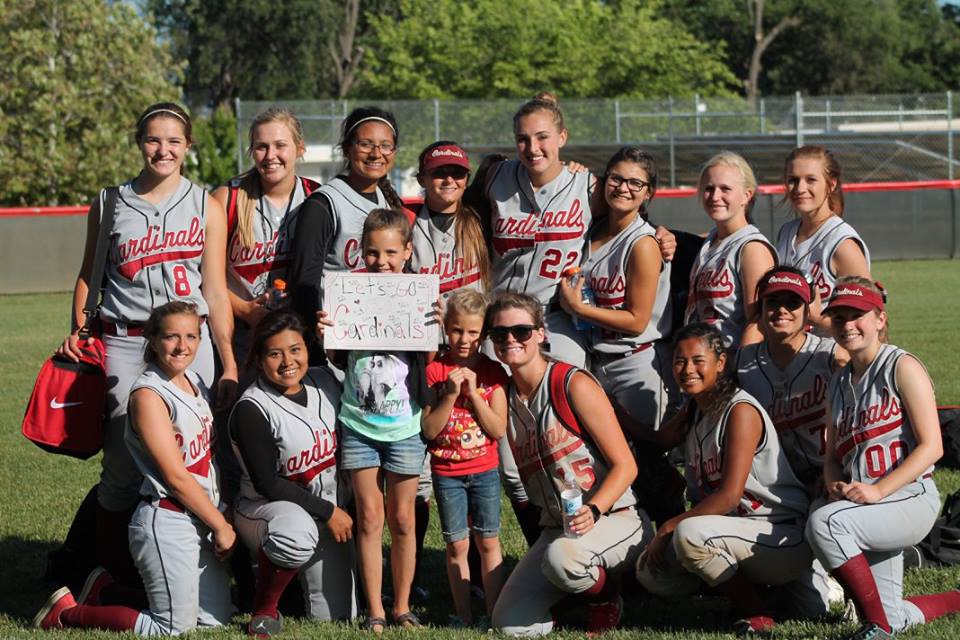 The Clear Lake Softball team is going to the NCS Division 5 Championship game.  The Cardinals scored the last eight runs of the game in the last two innings to take advantage of the ten run rule in a 14-4 win over St. Vincent in the Semi Final game Tuesday at Clear lake.
Rachel Wingler did it all.  The starting pitcher tossed a complete game, striking out ten. She was also big on the offensive side of things with three hits and three RBI.  The first two came on a third inning single which gave Clear Lake the lead for good.


The score would tell you it was one sided, which it turned out to be, but St. Vincent would like to have the first couple of innings back.  Hannah Sarlette hit an RBI ground rule double to start the scoring in the top of the first.  That set up St. Vincent with runners and second and third with one out, but they couldn’t score again.  Then in the second, St. Vincent loaded the bases with two outs, but Wingler got out of the inning with one of her strikeouts.  Then in the third, the Mustangs had two hits and a walk, but that was offset by a double play, so in the first three innings St. Vincent had eight baserunners and only a 1-0 lead.
The missed opportunities came back to haunt in the bottom of the third.  The two run single by Wingler gave Clear Lake a 2-1 lead.  Then later in the inning, a two run single by Destinee Garcia made it 4-1.
Clear Lake made it 6-1 after four, then St. Vincent made a run with a three run fifth.  Clear Lake put it away with five in the bottom of the fifth.  The hit that broke it open was a three run double by Alicia Ledesma.
St. Vincent, who has won two of the last four NCS championships, ends the season 16-11.
In a game that the two teams combined for 27 hits, there was one down side for Clear Lake.  Right before Winger’s single to give Clear Lake the lead, Hannah Norwood was ejected from the game after a collision at home plate in which she was called out.  With the ejection, she could be suspended from the championship game.
That championship game will be Friday at Clear Lake High School.  The opponent will be the winner of today’s St. Bernard Catholic-St. Joseph Notre Dame game.
Clear Lake will be looking for its first section championship since 2007.
The game was part of a two day NCS Semi-Final doubleheader at Clear Lake.  Today it is the baseball team’s turn as they try to advance to the championship game and keep the undefeated season going against Head Royce.  The game starts at 5 pm.
My email address is jacapasquini@comcast.net
Share