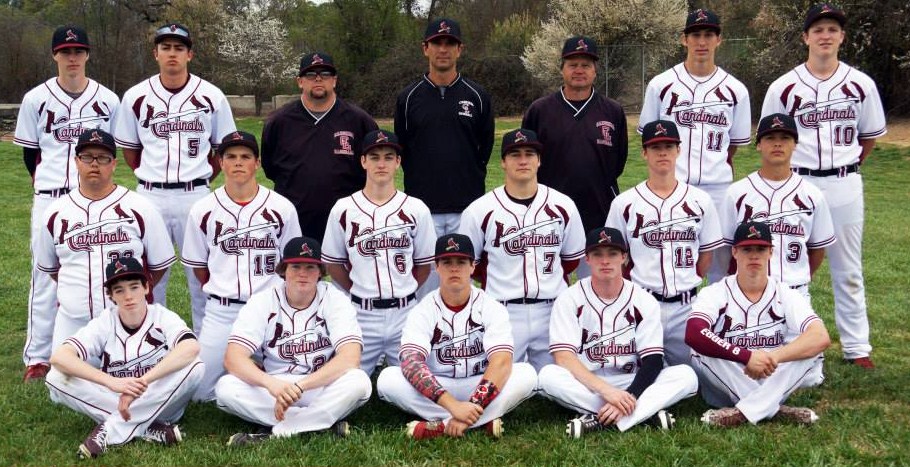 During its undefeated run, not all the games have been a piece of cake for the Clear Lake baseball team.  The Cardinals have outscored teams by a wide margin, but there have been some close calls.
There was the game against St. Vincent when they scored four in the sixth to take an 8-7 win.  A week later they went eight innings to edge Cloverdale 3-2, a game they trailed 2-0 in the fifth.  You also had a 4-3 win over St. Vincent-St. Patrick and the wild 12-11 win over Middletown.

Saturday’s second round win over Stuart Hall counts as one of those close calls.  Clear Lake scored single runs in the sixth and seventh to rally for a 2-1 win and make it win number twenty six.
Jake Egger drove in Jordan Chana with a single to get the walk off win.  Chana was an unlikely candidate to score the game winner when you consider he was up three times and struck out three times.  The third time started the seventh inning.  Strike three got away from the catcher and Chana reached first safely.  Next came a walk, which followed Egger’s singled and Clear Lake was celebrating its win.
The seventh inning celebration might not have happened if it wasn’t for some clutch pitching and hitting.  The pitching was started by Brandon Coakley, who went 3 1/3 and gave up one run.  The big pitch belonged to Matt Heller, who came into the game with the bases loaded and one out in the fourth already behind 1-0.  Heller got the inning ending double play to keep it a 1-0 game.
The clutch hit came in the sixth by Tyler Manning, whose two out single scored Cole Brodnansky with the tying run.  It was Brodnasky’s team high 41st run of the season.
Chana scoring the winning run adds to his big season, which is not because of the offensive end of things.  He has a team high ten wins and an ERA of 1.49.  He will probably be the starting pitcher when the Cardinals host Head Royce in the semi-final Wednesday in the NCS Semi-Final.
It was part of a good day for Clear Lake High School.  Right after the baseball game ended its game, it was the softball team’s turn.  It was a little easier for the softball team as they defeated Valley Christian 18-0.  Rachel Wingler pitched a one hitter and had four his and four RBI to raise the Cardinals record to 18-6.
Clear Lake will host St. Vincent in the NCS Semi-Final Tuesday at 4 pm.
The double win by Clear Lake was not an indication of how it went for the rest of the local teams.  One other local team won.  That win was one local team beating another.  There are four local teams left in the NCS baseball or softball playoffs.  Two of those teams are from Clear Lake.
SATURDAY RESULTS
BASEBALL
DIVISION 2
No. 12 Pinole Valley 3 No. 4 Casa Grande 2 (11 innings)
It was heartbreak hotel for Casa Grande, who carried a 2-1 lead into the seventh, but couldn’t close it out.  About an hour later, Pinole Valley scored the winning run in the eleventh.
Casa Grande had the bases loaded in the bottom of the inning.  The season ended on a line drive out to center, that for a moment appeared to be a dramatic game winner on a 3-2 pitch.
Casa Grande hadn’t scored since the first inning, when they took a 2-1 lead.  They really had a chance to take control in the second inning when they loaded the bases and no outs, but came away empty.
Casa Grande’s season ends at 21-7.  It is the third time in four seasons that Casa Grande has had a twenty win season.
Pinole Valley is 2-0 against NBL teams in the NCS playoffs.  As a No. 12 seed , they are one of two teams in either baseball or softball that is a double seed still going.  They will be at No. 1 Redwood on Tuesday.
The other double figure is also in Division 2 baseball.  That is No. 10 Livermore, who visits No. 3 Marin Catholic in the other semi-final. That game is also on Tuesday.
DIVISION 4
No. 2 Justin Siena 18 No. 10 Cloverdale 1
This was part of a tough day for Cloverdale fans, whose baseball team lost in Napa in a game that started at 1.  That was followed by a 4 pm game in Cloverdale in which the softball team lost.
The Cloverdale baseball teams ends 16-10.
DIVISION 5
No. 1 Clear Lake 2 No. 8 Stuart Hall 1
No. 4 Head Royce 5 No. 5 St. Joseph-Notre Dame 0
SEMI-FINAL
TUESDAY
No. 4 Head Royce (19-7) at No. 1 Clear Lake (26-0)…4 pm
DIVISION 6
SEMI-FINAL
No. 4 Tomales 8 No. 1 Rincon Valley Christian 7
No. 2 St. Bernard Catholic 7 No. 3 Point Arena 0
CHAMPIONSHIP GAME
No. 4 Tomales at No. 2 St. Bernard Catholic
TIME AND DAY TO BE ANNOUNCED
Tomales was 0-2 vs. Rincon Valley Christian in NCL II play.  They made up for that with a win to advance to the NCS Division 5 championship game.
Tomales carried an 8-3 lead into the bottom of the seventh.  Rincon Valley Christian scored four runs in the bottom of the seventh and had the bases loaded when the game ended.
Rincon Valley Christian ends 18-5.
Point Arena was no hit by Cade McNamara of St. Bernard, who struck out ten.  Point Arena ends the season 11-7.
SOFTBALL
DIVISION 2
No. 1 Livermore 2 No. 8 Petaluma 0
Petaluma was two hit and ends the season 24-4.
DIVISION 4
No. 5 Berean Christian 10 No. 4 Cloverdale 1
No. 1 Marin Catholic 3 No. 8 Lower Lake 1
Part of the long day for Cloverdale fans, who ends up 20-5.
Lower Lake hung in its game with No. 1 Marin Catholic.  A win would have given Lower Lake a twenty win season for the first time in the Max Prep era.  They finish 19-7 on the year.
DIVISION 5
No. 1 Clear Lake 18 No. 9 Valley Christian 0
No. 5 St. Vincent 7 No. 4 Calistoga 6
SEMI FINAL
TUESDAY
No. 5 St. Vincent (16-10) at No. 1 Clear Lake (18-6)…4 pm
DIVISION 6
CHAMPIONSHIP GAME
No. 1 Laytonville 17 No. 2 Rincon Valley Christian 11
In what was by far the wildest game of the day, Laytonville outscored Rincon Valley Christian.  Rincon Valley Christian led 9-5 after two and a half innings.  Laytonville then put together three straight four run innings to take control.
Rincon Valley Christian ends the season 9-12.
My email address is jacpasquini@comcast.net