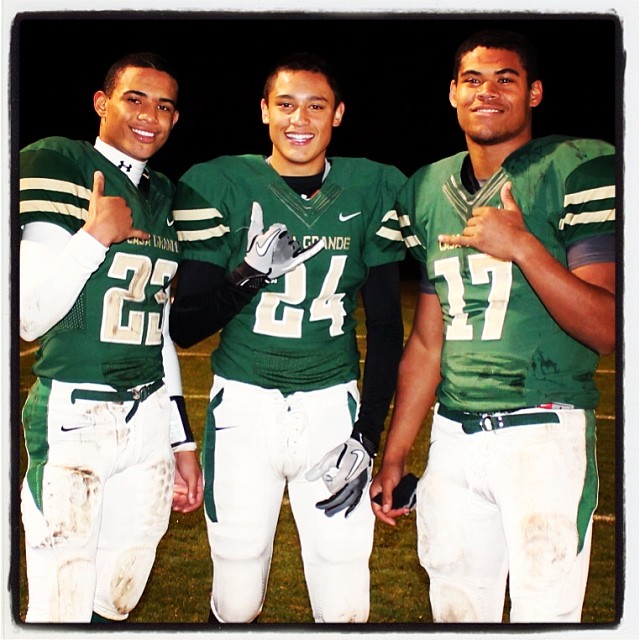 Casa Grande looks like a team on a mission.  There were whispers that of all the No. 1 seeds, they maybe the team in the most trouble.  They were playing a league opponent that had given them a battle during the regular season.

There was no need to worry.

Casa Grande quarterback JuJuan Lawson had over 100 yards in total offense after three offensive plays.  More importantly Casa Grande had a 14-0 lead and was on its way to a one sided win over Windsor.

Windsor got the ball first and it turned out it would be the only time they got the ball when they weren’t behind.   After three plays they were forced to punt.  One play later they were behind.

Lawson ran an option and faked a handoff to John Porchivina.  Most of the eyes watching and the Windsor defense went with the fake.  Lawson showing why he is the best overall quarterback in the area, made a fabulous run going 64 yards for a score and 90 seconds into the game Casa Grande had a 7-0 lead.

Windsor did get two first downs on its next possession.  Casa Grande also picked up its first two of eight sacks on the night, forcing anoter punt.

On the third play from scrimmage on its second possession, Lawson put the ball into the hands of Porchivina on a little swing pass.  Porchivina made a brutal run, shredding tacklers and went 74 yards to make it 14-0.

The first quarter show continued when Andre Kupelian returned a punt 30 yards to the Windsor 21.  Four plays later it Lawson scoring from 13 yards out and it was 21-0.

Lawson had thrown one pass for 79 yards, ran the ball twice for 77 yards and all three plays were touchdowns.   Lawson would end up with nearly 300 yards of total offense.

Windsor ends a season that had as many ups as it did downs at 6-6.

Meanwhile, Casa Grande is now 12-0.  They are the first Casa Grande team in school history to win twelve games.   To break that mark was pretty much expected by the Division 2 No. 1 seed.  In a season full of school first, they are now two wins away from the first NCS Football championship in school history.

But as coaches like to say, one step at a time and it shouldn’t be hard for them to focus on that next step.   Casa Grande will host No. 4 Montgomery next Saturday Night at 7 pm. It will renew one of the best rivalries in the area.

The two teams opened league play on September 27th, with Casa Grande taking a 24-0 first half lead on its way to a 30-12 win.

It is a familiar game in local sports, both during the regular season and in post season play.

The other semi-final game is No. 3 Miramonte at No. 2 Clayton Valley and will be played Friday.

In a game that had over 1,000 yards in total offense, Miramonte won a wild one over #6 Northgate.

Northgate lost the game despite a 372 yard, five touchdown rushing game from running back Eric Hayes.

There was four touchdowns score in every quarter but the second when each team scored one.

As expected, No. 1 Marin Catholic continues its domination.   We have talked all season how Analy has dominated.  Marin Catholic has been just as good outscoring opponents by an average of 47-8.  The defending NCS Division 3 and Nor Cal champions are 11-0 on the season.

The other semi-final is Friday Night with No. 3 El Cerrito going to No. 2 Campolindo.  This is a rematch of a September 20th regular season game won by Campolindo 42-27 which is the reason the game is at Campolindo.

The comeback season ends for Piner as they are defeated by San Marin.  The Prospectors were big underdogs as it was.  It didn’t help that they didn’t have a healthy quarterback.  Head coach John Antonio revealed after the game that Noel Hernandez had a partially collapsed lung and wasn’t cleared to play until late in the week.

Piner had a couple of red zone chances in the first half and didn’t convert.   One time it was it was 14-0 and a tip pass was intercepted in the end zone.   Three plays later it was 21-0.

Despite the injury, Hernandez threw for 207 yards and two scores.

Piner ends a season that keeps the comeback of the program headed in the right direction.  They finish 6-6, which is the first .500 finish since 2003.

Healdsburg was behind at halftime 27-7 in its lost to Del Norte and season ends at 6-6.

The championship game between No. 5 Salesian and No. 2 Valley Christian will be played at Chabot College next Saturday Night at 7 pm

Mike Pierson threw for 281 yards and four touchdowns in the second half.  The two teams combined for 67 first downs.

Both the SRJC Men and Women won first round games in the California State playoffs.

SRJC will host No. 6 West Valley in the second round on Tuesday.

The No. 5 Women have to go on the road for its second round game after a 4-0 win No. 12 Ohlone.   SRJC scored three first half goals.

SRJC will be at No. 4 Cosumnes River in the second round game on Tuesday.

SRJC and Cosumnes River are both in the Big 8 Conference.  SRJC edged out Cosumnes River for second place. The reason Cosumnes River has the high seed is because they were 2-0 vs. SRJC winning games by 2-0 and 1-0 scores.

It wasn’t a complete loss for Windsor sport teams on Saturday.  The Girls basketball teams opened its season with a 72-50 win over Analy.  Kerianne Noonan led the way with 15 points.

In a boys game, AJ John scored 20 points to lead Maria Carrillo to a 59-46 win over Redwood.

That is the sign the high school basketball season is here