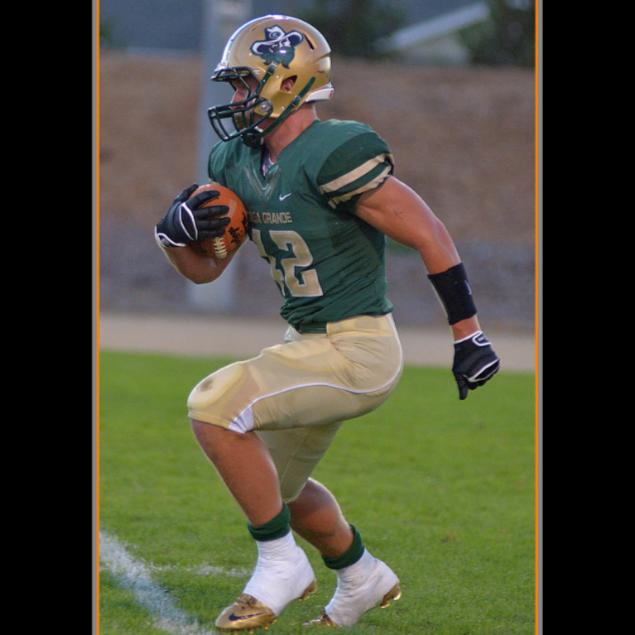 It was a long day being part of the KSRO broadcasting team.

It felt longer because of some technical difficulties.  We were forced to use a cell phone for a good portion of the Analy-Marin Catholic game to keep it on the air.

The cell phone was used because we couldn’t find a string and cans for the connection.

As for the games, they went as expected with two exceptional teams taking the next step to the North Coast Section Championship Game.

When Logan Francavilla scored on a six yard run with :38 left in the first half, Montgomery cut Casa Grande’s lead to 14-12.  The Vikings had missed the extra point after their first touchdown because of a bad snap.  Most teams would have gone for two and the tie, but Montgomery was feeling good about things and figured that point could be chased at a later time.

They had good reason to feel that way.   They had played undefeated Casa Grande even during the first half and had just finished the touchdown drive playing Montgomery football.

After a blocked punt, Montgomery drove the ball 35 yards in nine plays, eating up five and a half minutes of the clock.  Francavilla had run all but two plays on the drive and ended the half with over 100 yards rushing.   They made the extra point to make it a 14-13 halftime score.

It turned out that decision would be a moot point as Casa Grande came out in the second half and played like Casa Grande has played most of the season and pulled away for a 42-13 win.  The win raises the Gauchos record to a school best ever 13-0 and more importantly advances to the third NCS Championship game in school history.    Casa Grande will meet Miramonte next Saturday Night at Rancho Cotate High School.

The 2013 Casa Grande Gauchos or a replica of the team, showed up right at the beginning of the second half and took the suspense out of things in dominating fashion.

They took the second half kickoff and went 84 yards in five plays and scored on a 32 yard run by Cody Hughson to take a 21-13 lead.   It was one of two carries the Hughson had on the night.  The most carries he has had in one game this season is seven, yet still it was the fifth straight game that he scored a touchdown.  The shortest play on the drive was eight yards.

Three plays and a little over a minute later, Casa Grande had the ball back.   The Gauchos then used the combination they had used most of the season to go on a 13 play 69 yard drive to take full control.   Every yard on the drive belonged to either quarterback Jujuan Lawson or running back John Porchivina.   This was after Lawson had a quiet first half and ended up with his worst offensive game of the season.   He passed for 85 yards on only seven passes, 66 of them on one play in the fourth quarter when the game was put away and rushed for 75.  The numbers were high enough to put him over 2,000 yards passing and 1,000 yards rushing for the season.

Porchivina ended the drive with a three yard scoring run.  It was his third touchdown of the game to make it 28-13.   He had started the scoring with a 72 yard run on Casa Grande’s first play of the night.  It was the second straight game Casa Grande scored on its first offensive play of the game.

Back to the second half, after another three and out, Porchivina took the ball 53 yards on the next offensive play for touchdown number four and just like that not quite ten minutes into the third quarter,it was 35-13.

For good measure on Montgomery’s next drive in which the Vikings finally got its first two first downs of the half, Porchivina intercepted a pass and quickly changed from linebacker to running back and went 80 yards for touchdown number five.

Porchivina ended up with 201 yards rushing.  It was his second highest output of the season.  The biggest was a school record 301 yards against Windsor during the regular season.  The big night put him over the 1,500 yard mark on the season.

Montgomery missed by that second half of coming all the way back after finishing under .500 four of the last five seasons.  The Vikings end the season 10-3 and the proclamation that Montgomery football is back and ready to compete.

But the 2013 high school football season has belonged to Casa Grande since the opening night 51-13 win over Eureka.  The Gauchos have set the standard for that every Casa Grande football team will be compared to from here on out.

They have at least one more standard to set.  That attempt comes next Saturday in the NCS Division Championship game against Miramonte.

After having one of its toughest games of the season, you can’t blame the No. 1 seed in Division 3 for scratching its head a little.   After pulling away from No. 4 Analy in the second half for a 48-20 win to advance to the Division 3 NCS Championship game, they found out they have to go on a road trip.   They will meet No. 3 El Cerrito for that Championship Friday Night at Burrell Field at San Leandro in a head shaking decision by the North Coast Section.

If Marin Catholic brings the offense they brought to the Analy game they should be okay.  They are the real deal as is quarterback Morgan Mahalak who showed everybody why Oregon wants him.

How well Mahalak threw the ball with pinpoint passing it didn’t matter who the defense was against him.  He went 23 of 32 for four touchdown passes and also showing deceptive speed on a 52 yard run for a score.

Most of his passing yardage went to receiver Andrew Celis, who will be going to Reno for college.  He caught nine balls for 173 yards and two touchdowns.

On the day Marin Catholic had 300 yards passing and 299 yards rushing.   You can’t get much more balanced then that.   That was nothing new for a team that averaged 215 yards rushing and 202 passing on the season.

The reason for the numbers being a little higher in this game is because this wasn’t you run of the mill Marin Catholic blowout.   They had outscored opponent by an average of 47-5 during the season and had a running clock in the fourth quarter in all but one of its home games.

This game, Analy competed and did enough on offense to keep it a reasonably close game for nearly three quarters.  In fact for most of the first half it was more than reasonably close.

A nine yard run on an end around by Kerr Johnson with 2:38 left in the first half cut the Marin Catholic lead to 21-14.

That 2:38 was too much time to leave the Marin Catholic offense.  Add to that they got the ball first in the third quarter.   After the two drives Marin Catholic had full control 34-14.

Analy defense had some hope on the third quarter drive.  A holding penalty on the first play and an incomplete pass set up a 2nd and 23.  Ten plays later Mahalak was throwing his third touchdown pass with seven minutes left in the quarter.

Analy’s offense didn’t go away.  They followed that with an impressive 80 yard drive.   They converted two fourth down plays along the way on nifty runs by Will Smith, which included a three yard run for the score to make it 34-20 with 2:23 left in the third quarter.

It would take something out of the ordinary in the second half for Analy to pull the upset and the Marin Catholic offense wouldn’t let that happen.

Analy can take some pride in a couple of things.

First the fans were there.  It was a standing room only crowd on the Analy side of the field and some of their fans were sitting on the Marin Catholic side.

Also they proved that the football program may be around for a while.    After going 12-1 last season, that could have been read as a blimp on the screen.  Not after this season when they went 11-2 with wins over Division 1 power Pittsburg and Division 3 power Cardinal Newman.

It is the second straight season the Tigers have made the semi-final round of the power pack Division 3 playoffs.   On that account they improved too.

In last year’s semi-final they lost to El Cerrito 40-20.  Even though the scores are similar the games weren’t.   In the game last year they were behind 33-0 in the third quarter and were dominated worse than that.

Of course it would be a goal to host a Semi-Final game some year.   In the tough Division 3 that would be a challenge.  The way Analy has turned it’s a program around it might be a challenge they are ready to tackle.

There has to be some smiles on the Fortuna fan base faces this morning.  Not only did they defeat league rival Del Norte to get to the championship game, they get to play that NCS Championship game at Humboldt State.   That is because No. 1 San Marin was upset and saved Fortuna about eight hours of round trip travel time to the North Bay for the championship game.

It was a different division but same results for Salesian who wins its third NCS title in four years.

Foothill scored the only goal in the last five minutes of the second half to advance to the JC State Soccer Final Four.

Cabrillo is 27-0 winning the match in three straight with the closest game 25-18 which was game two.

TO GET YOU READY

The basketball season is kicking in.

Some news and notes from Saturday Night:

Piner went on the road and rallied from an eight point halftime deficit to edge Windsor 49-47.  Keith Adams scored 16 to lead the way.

Not so close was Healdsburg defeating Fort Bragg 56-23 behind 18 points for Gus Morris.

The Healdsburg Girls made it a double win over Fort Bragg with a 43-32 win.  Kaitling Carroll led the way with 12 points.

Windsor Girls went to 2-0 with a 68-42 win over Redwood.   Four players scored in double figures led by Andrea Flinn with 16 points in a game Windsor had a 20 point lead in the first quarter.

Sonoma Valley got a 15 point-14 rebound game from McKenzie Albrecht as they Drake 50-35.