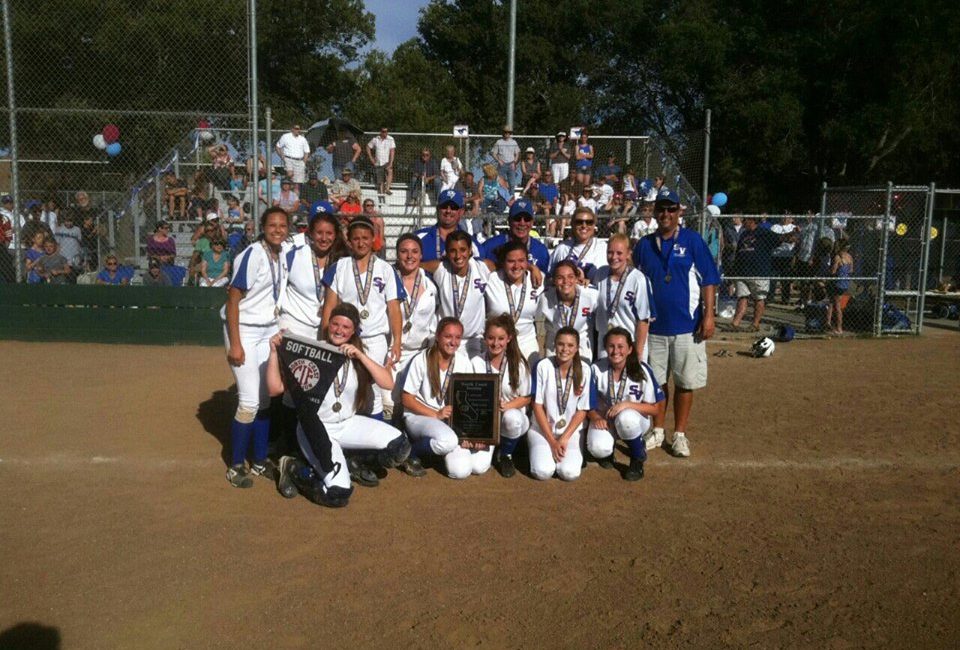 The North Coast Section Semi-Finals involving the local teams went the way most expected them to go.

On the baseball side, that wasn’t good news for Montgomery.

On the Softball side it meant a tight game between two championship teams.   That is the way it went and the way it ended left a bitter taste for the St. Vincent softball team.

Fortunately this doesn’t happen very often.  That is an official call deciding the outcome of a game.  For a call to decide the game, for the most part, it has to happen in the late portions of the game.  It happens occasionally, but not often.

In the last game of the 2014 school year the headline wasn’t about a well-played thriller, it was about a call that cost the St. Vincent Softball team at least a tie game in its NCS Semi-Final Game against Ferndale.   Instead they had to take a 6-5 loss and think about what could have been.

I am not going to fool you and claim I was at that game because I wasn’t.   I did have a contact at the game and he messaged me, “Lost 6-5”.   Moments later he followed that up with the message, “Sarlatte tied the game on a bunt single. Called out on CONTROVERSIAL interference call”.

My first thought was it was a St. Vincent fan and might have been bitter about losing a tough game.   I was looking forward to the newspaper accounts of the call.   The Press Democrat version was in the same shape that I was in, they didn’t attend the game.   They did mention the call, but it wasn’t the main part of the article.

I was pretty sure that a reporter from the Eureka Newspaper would be there.  To tell you the truth, I was waiting to see their version of things and how different it would be considering in their world, the home team won.

There wasn’t much difference at all and to the papers credit the headline didn’t mince words, “NCS PLAYOFFS:  Ferndale edges St.Vincent 6-5 after controversial call by umpire.”

The situation was this.  St. Vincent had runners at second and third with one out.  They had scored a run to cut the lead to 6-5. Hannah Sarlatte laid down a bunt that not only brought in the tying run, but she beat the throw at first.   St. Vincent would have runners at first and third with one out in a 6-6 tie.   From the Eureka paper, “The plate ump stood from his crouch and declared Sarlatte out because the ball hit her after the bounce.”

A couple of other quotes from the article:

“It was close, but it looked like the ball came up and hit her,” said Ferndale head coach Jeremy Griffith of the play. “The ball changed direction, and she was definitely out of the box. It was a tough call for the umpire, but he had to make it.”

“A game like the one we just played, should never come down to an ump’s decision,” said Mustangs head coach Don Jensen.

As the day has gone on, I have talked to Hannah Sarlatte and she was positive she didn’t touch it saying, “I saw the ball right in front of me and sidestepped around it so I would not interfere with the play.  I know for a fact that it did not hit me and my body never once made contact with the ball.”

From the outside looking in a couple of points:

No. 1:  Eureka made a play at first on Sarlatte.   So either the call wasn’t made right away or it wasn’t made very loud.

No. 2:  Sarlatte’s answer.   She just didn’t say the ball didn’t hit her, she said that she saw the ball and sidestepped it so it wouldn’t hit her.  That would be a pretty big statement if a jury was deciding things.

No. 3:  In the Eureka article, Jensen also commented that the home plate umpire, “Asked the wrong guy for help.  He asked the third base ump when he should have asked the first base ump, who was looking right at the play.”  Actually in that part of the game, he should have asked both and made sure he saw what he thought he saw.

It is too bad that a headline like that was used in any paper, after a thrilling game in which there were four lead changes.

The first two paragraphs of the Eureka newspaper article summed it up:
Two-out rallies, a game-altering home run and several smooth defensive plays were all the ingredients for a tense and entertaining playoff game.
Yet, the Wildcats’ 6-5 nail-biter of a victory over the Mustangs in a North Coast Section Division 5 softball semifinal contest Wednesday afternoon boiled down to one thing: The home plate umpire’s call in the seventh and final inning.

It is too bad it had to be decided by that.

As for the baseball game, not that kind of suspense.   With the debate of the seeding in the Division 2 baseball playoffs, it appears along with all the other mistakes the committee made, another one was not having College Park the No. 1 seed.

College Park continued its march to the NCS Championship game with a 9-0 win over Montgomery.   College Park has won three games in the NCS playoffs, with all three over Sonoma County teams.    They outscored the opponents in the three games 23-1.

The Division 5 softball championship game between Ferndale and No. 1 Redwood Christian will be played at Larry Standley Field in Hayward. The game is Friday at 4 pm.