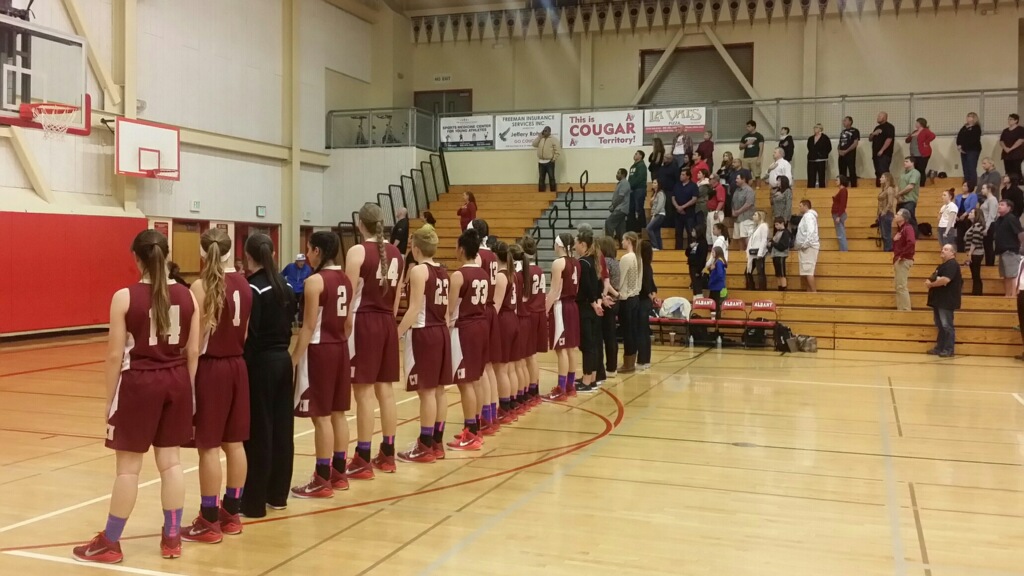 The two best teams in the area will be playing for North Coast Section Championships this weekend.
The Cardinal Newman and Montgomery Boys each pulled off double digit wins to advance.
Archbishop Hanna also advances to the Division 6 Boys Championship game.
The three Girls teams all lost, but will still be in the Nor Cal playoffs next week.


DIVISION 2
BOYS
No. 2 Montgomery 61 No. 3 Dublin 49
No. 1 El Cerrito 76 No. 4 Las Lomas 57
CHAMPIONSHIP GAME
SATURDAY—8 PM AT ST. MARY’S COLLEGE
No. 1 El Cerrito (28-3) vs. No. 2 Montgomery (21-10)
Montgomery goes for its first NCS Championship since 2011 with a win over Dublin.
A 21-2 run that started late in the second quarter gave Montgomery control of the game.  Erik Poulsen scored eight of his game high 26 points during the run.  Poulsen also pulled fifteen rebounds, which was part of a 43-16 edge on the boards for the Vikings.  Matt Hyman also pulled down 13.
Poulsen scored the last four points of the first quarter, which gave Montgomery its first lead of the game 14-12.  They wouldn’t trail again, although five straight by Dublin’s Kobe Toney tied the game at 20-20 with two minutes to go in the half.  Toney was Dublin’s leading scorer with 15 points.

Montgomery scored the last six points of the half, which started the 21-2 run giving them a 41-22 lead with two and a half minutes left in the third.

Dublin didn’t go away, as a pressing defense frustrated Montgomery the rest of the night.  Montgomery committed fourteen turnovers in the last ten minutes of the game, including back to back ten second violations.  Still the closest Dublin got was 57-49 with :50 left.  Poulsen hit four free throws to wrap up the scoring.
Montgomery, now 21-2 on the season, now hits the road to meet No. 1 seed El Cerrito in the NCS Division 2 championship game.  The game will be played Saturday night at 8 pm, and will be the last of four championship games that will be play at St. Mary’s College in Moraga.


GIRLS
No. 2 Dublin 60 No. 3 Windsor 30
No. 1 Carondelet 75 No. 13 Novato 25
CHAMPIONSHIP GAME
SATURDAY—6 PM AT ST. MARY’S COLLEGE
No. 1 Carondelet (27-2) vs. No. 2 Dublin (25-3)
Windsor is 18-12 and now will wait to see where they will go in the Nor Cal playoffs next week.
DIVISION 4
BOYS
No. 1 Cardinal Newman 73 No. 4 St. Mary’s 56
No. 6 Marin Catholic 77 No. 2 St. Patrick/St. Vincent 65
CHAMPIONSHIP GAME
FRIDAY—7 PM AT SRJC
No. 1 Cardinal Newman (29-2) vs. No. 6 Marin Catholic (21-10)
Connor Rubattino scored 29 points as Cardinal Newman led most of the way and defeated St. Mary’s to advance to  NCS championship game for the second time in three seasons.
Damian Wallace added 16 as Cardinal Newman will not only go for the NCS Division 4 title, but its 30th win on Friday night when it meets Marin Catholic.  That game will be at SRJC with tipoff scheduled for 7 pm.
GIRLS
No. 2 Salesian 57 No. 3 Cardinal Newman 55
No.1 St. Mary’s (Berkeley) 81 No. 4 Piedmont 50
CHAMPIONSHIP GAME
SATURDAY…7 PM ALBANY HIGH SCHOOL
No. 1 St. Mary’s (Berkeley) vs. No. 2 Salesian
Heartbreak for Cardinal Newman girls as they see their 19 game winning streak come to an end on a shot with 1.6 left. Salesian scored the last four points of the game.
Cardinal Newman (25-6) now waits to see where they will go in the Nor Cal playoffs next week.
It is the fourth straight season that St. Mary’s and Salesian will meet in the Division 4 championship game.  St. Mary’s has won two of three, including the last two.  That is the only Division 4 championship that St. Mary’s hasn’t won since 2008.
DIVISION 6
BOYS
No. 1 St. Bernard Catholic 89 No. 5 CSD (Fremont) 58
No. 3 Archbishop Hanna 83 No. 7 Anderson Valley 76
CHAMPIONSHIP—SATURDAY 8 PM
No. 3 Archbishop Hanna (24-4) at No. 1 St. Bernard Catholic (19-10)
GIRLS
No. 1 St. Bernard Catholic 85 No. 5 Cornerstone Christian 41
No. 2 Ferndale 40 No. 3 Round Valley 27
CHAMPIONSHIP—SATURDAY 6 PM
No. 2 Ferndale (14-13) at No. 1 St. Bernard Catholic (20-9)
Division 6 has gotten to the Nor Cal bracket, but not the neutral phase for the NCS Championship game so St. Bernard Catholic will host a doubleheader Saturday Night.
The Archbishop Hanna Boys, a school from Sonoma, won a wild game over Anderson Valley. Armani Perry scored 18 to lead Archbishop Hanna.
Abraham Sanchez led Anderson Valley with 26 points, hitting six 3’s. Anderson Valley, who is 19-9 on the season, will be in the Nor Cal playoffs next week.
As will the Round Valley Girls, who fall to 16-7 after its loss to Ferndale.
My email address is jacpasquini@comcast.net
You can also now follow me at twitter @homer2612
Share