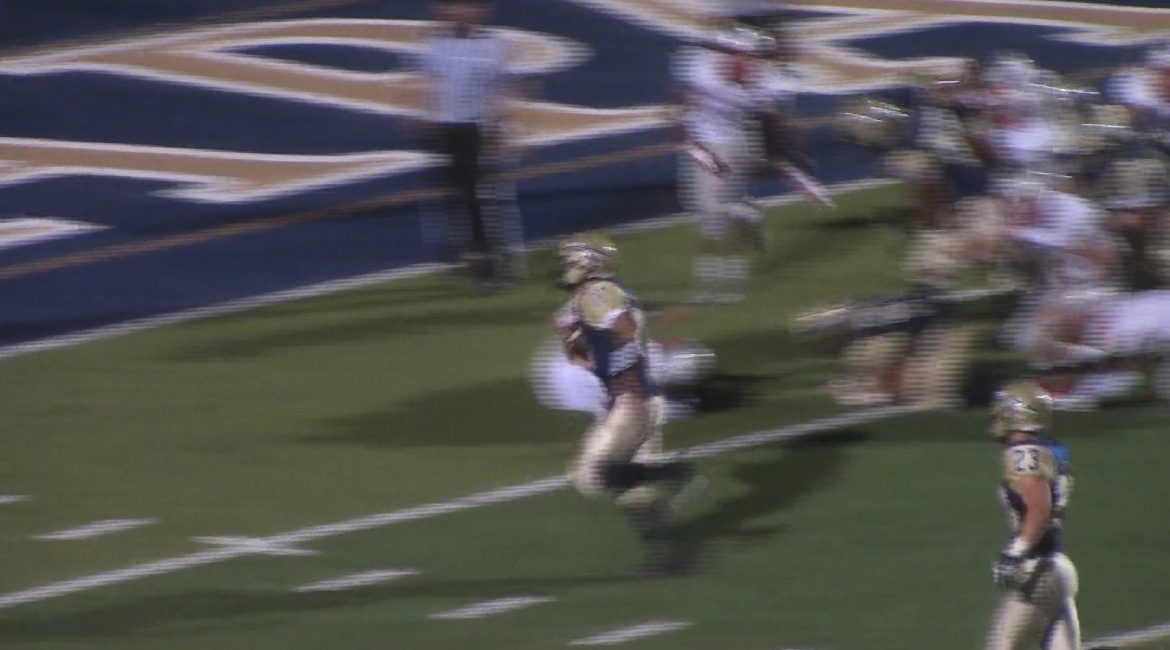 I am not a big Heat fan, and I’m not talking the Miami Heat, although I was not a big fan of them either.  I am talking about the kind of heat that the sun generates.  When the temperature hits 90, I start to feel things.  Actually what I feel like is it’s time to hit the beach, hit some shade or be at a place that has a roof and plenty of AC.  Don’t ask me to do anything and if you are thinking,”come on you won’t melt,” I not so sure about that.
I mention this because on Saturday most of the area had that kind of day.  It was uncomfortable to open a door in some areas, or sit in the sun for any length of time (like a few high school football fans had to do). I can’t even imagine putting on a football uniform and throwing your body into another body for a good portion of that kind of afternoon.
I am sure some of the student athletics must have been thinking “I do this why?”
Here is to some football weather and soon.
Rain would be okay too.
SATURDAY RESULTS
No. 3 Cardinal Newman 56 Churchill County 32
Napa 36 No. 5 Montgomery 7
Del Norte 26 Piner 12
Cloverdale 35 Calistoga 0
St. Bernard’s 13 St. Vincent 6
CSD Fremont 63 Upper Lake 0
In a game full of big plays, it was close until a three touchdown fourth quarter put things away in a 56-32 win by Cardinal Newman over Churchill County.
There were eight scoring plays over 20 yards, with two of those being over 80.
There were also two ties and three lead changes.   The last lead change was an 85 yard kickoff return by Kasey Mansen late in the third quarter to give Cardinal Newman a 35-32 lead.   Just one play before, Aaron Bitter picked off a pitch on an option play and went 38 yards the other way for a score.
Sophomore quarterback Jordon Brookshire had himself quite a debut for Cardinal Newman, passing for 178 yard and rushing for 228 more.   Between passing and running he combined for five scores.  He threw an 87 yard touchdown pass to Tommy Streb on the first play of the fourth quarter and added a 36 yard run for a score to make it 49-32.
Watch the Video Highlights: Click here
The Montgomery coaching debut of Marcello Bautista didn’t go as planned in a 36-7 loss to Napa.  Quarterback Kiel Brown scored the final two touchdowns of the first half to give Napa a 29-0 lead.  The Indians scored four of the first five times they had the ball.

Montgomery couldn’t stop the option offense that rushed for over 300 yards, led by Mac Neilson who went for 156 and a score.
The only Montgomery score was a 64 yard run by Ke’Shawn Walker, which came on the last play of the third quarter.  It was nearly half of the 158 yard rushing game for Walker.
Napa will get another shot at the North Bay League next week when they travel to Casa Grande.
Watch Video Highlights: Click Here
Things started out good for Piner in a 26-12 loss to Del Norte.  Late in the first quarter Peter Barbieri returned an interception 15 yards to give the Prospectors a 6-0 lead.  The lead didn’t last two minutes as Steven Mareadu threw an 86 yard catch and run to Austin Healy to give Del Norte the lead for good.  It was the first of three touchdown passes by Mareadu, which gave Del Norte a 20-6 lead in the third quarter.
Piner did rally, when Tony Martignoli threw the first of his two touchdown passes to cut the lead to 20-12, with four minutes left in the third quarter.  Martignoli passed for 179 yards and rushed for 109.
Piner was in the game most of the way, but too many penalties hampered them throughout the day.   One of the big ones came in the fourth quarter with the score 26-18.  They committed a roughing the punter penalty which gave Del Norte back the ball and Del Norte took advantage by driving for the touchdown that put the game away.
Cloverdale scored three first quarter touchdowns on its way to a dominating 35-0 win over Calistoga.  Luke Bernardi rushed for 158 yards and scored the game’s first touchdown on an 8 yard run.  Greg Scaramella passed for one score and ran another one in.
Cloverdale held Calistoga to 65 yards in total offense and forced as many turnovers as they did first downs (four).
It was Cloverdale’s first opening day win since 2009.
Noah Davis threw a touchdown pass one the first play in the fourth quarter and that was the difference in St. Bernard’s 13-6 win over St. Vincent.   Logan Tharp caught the winning score.   It was one of eight catches for 103 yards for Tharp.
St. Bernard’s outgained St. Vincent by over 200 yards.
FRIDAY RESULTS
No. 1 Analy 47 No 4 Casa Grande 14
Fortuna 35 No. 9 Healdsburg 21
No. 10 Petaluma 13 Santa Rosa 12
Maria Carrillo 21 Redwood 14
Windsor 30 Granada 10
El Molino 47 Willits 34
Deer Valley 49 Elsie Allen 0
Tomales 41 Hoopa Valley 12
Clear Lake 32 South Fork 0
McKinleyville 46 Fort Bragg 36
THURSDAY RESULTS
Kelseyville 42 De Anza 14
IDLE
No. 2 Rancho Cotate, No. 6 Middletown, No. 8 St. Helena, Ukiah, Sonoma Valley and Lower Lake.
My email address is jacpasquini@comcast.net
Share