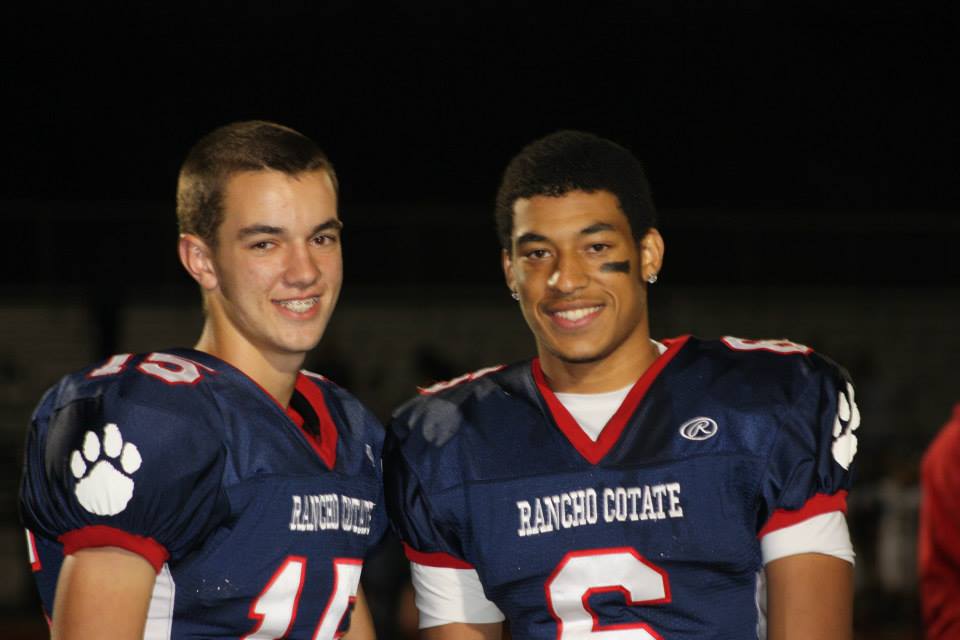 With the set of games on the schedule there was potential, but wow.
There were close games all over the place and although most finals didn’t have a dramatic finish, several games were up in that area in the fourth quarter.
Two of the games were headlines for league play.   They both did go down to the last moments of the fourth quarter and in one case even later.
This is the night that had the game of the year. Well let’s say that if it isn’t the game of the year, it will be hard to top.
That game came from a rivalry that might be taking over as the best football rivalry in the area, which is Rancho Cotate and Cardinal Newman, who played a wonderful football game.   It is the game the NFL wants its game to be and is what it has turned into which is all offense and no defense.
The other headline game was between St. Helena and Middletown, the two top teams in the NCL I, who had more defense than offense and just as much suspense.
There was the feeling those two games could put on quite a show and they didn’t disappoint.
If those were the only close games of the night it would be considered the best night of this season, but other games added to make it a special night of high school football.
NBL
No. 2 Windsor 10 No. 6 Montgomery 7
No. 3 Rancho Cotate 45 No. 4 Cardinal Newman 38 (OT)
No. 8 Maria Carrillo 35 Santa Rosa 26
Casa Grande 47 Ukiah 0
In a game that was completely on the other end of the spectrum from the Rancho Cotate-Cardinal Newman game, Windsor goes to 6-0 after holding off Montgomery 10-7.
The only Windsor touchdown came early in the third quarter when Jalen Roman hit Gedi Tevares on a fifty yard pass to give Windsor a 10-0 lead.   Taveris also kicked a 25 yard first quarter field goal to score all of Windsor’s points.
What happened between the field goal and the touchdown turned out to decide the game.   After the field goal, Montgomery went on a long drive.   They tried a 22 yard field goal that never had a chance because of problems on the snap.    That assured Windsor a 3-0 halftime lead.
Then on one play before the touchdown, Windsor got the ball on an interception by Evan Legaspi.
Montgomery put some late suspense in the game driving 85 yard to cut the lead to 10-7, the touchdown coming with 5:41 left on a two yard run by Richard Flores.
Montgomery got the ball back with one more chance to steal the win.  The drive never had a chance as Windsor’s defense picked up two of its four sacks and Montgomery was called for an offensive pass interference penalty.
In five of its six wins Windsor has given up ten points or less and is averaging giving up 10.8 points a game, which is the best in the area.
In what seems like a different world there was the Rancho Cotate-Cardinal Newman game.   Any description of that game can’t be done with justice here.    Take away that one game in which Windsor gave up over ten points, Rancho Cotate scored more points than what Windsor gave up those other five games combined.
To win the game they had to.

The game had nine lead changes, five of them in the third quarter, and somehow Rancho Cotate stole one from Cardinal Newman, 45-38 in overtime.
The start of the game gave no indication of what was in store.  A 25 yard field goal by CN’s Aiden Nagle was all the scoring in the first quarter.   Cardinal Newman would follow that up with a 97 yard drive in which they converted a 3rd and 11 and 4th and 1 before crossing midfield and scoring on a seven yard run by Craig Lucey to make it 10-0 with six and half minutes to go in the first half.
That started a scoring frenzy that would last through the overtime.
In a game of one big offensive play after another, the game actually turned twice when Rancho Cotate was on defense.   The first time came late in the first half when Michael Ross intercepted a pass and ran it back down to the one, setting up a touchdown run by Carlos Franco.   It was Rancho Cotate’s second touchdown in a little over a minute and shockingly it gave the Cougars a 14-10 halftime lead.
The other time was with 1:40 left and Cardinal Newman one first down away from sealing the win.  On a fourth down play that they lined up as if acting to go for it, a bad snap gave Rancho Cotate the ball at the 27 yard line.   That set up a field goal by Kevin Nguyen that sent the game into overtime.
In between those two plays there was the third quarter.   Oh that third quarter, in which the two teams combined for 300 yards in offense and five touchdowns.  The quarter had started as a relatively calm, close 14-10 game and ended with a wild 31-28 one.
Rancho QB Gunnar Mefferd passed for 228 yards and five touchdowns, three of them to junior sensation Chris Taylor-Yamanoha, who has caught seven on the season.  The pair connected in overtime on third down for the game winner.

On the Cardinal Newman side, sophomore quarterback Jordan Brookshire rushed for 261 yards and three scores and Lucey added 132 more yards and two more scores.  It is the third time this season that Brookshire has rushed for over 250 yards and puts him over the 1,000 yard mark on the season.
There is a down side and a potential good side.
The down side is someone had to lose.   Cardinal Newman falls one game behind Windsor and Rancho Cotate in the NBL race.
The potential good side of things is both teams are in Division 3 this season, so we could see a rematch in the NCS playoffs.
Actually they should have a rematch instead of the playoffs and donate the proceeds to some worth charity.   Then everyone would be a winner, including high school football fans.
In the other two NBL games, Maria Carrillo and Casa Grande got league win No. 1.
Maria Carrillo held off a stubborn Santa Rosa team 35-26.  Alex Netherda scored four touchdowns, two rushing and two receiving.  The last came with 2:36 left to put the game away.
Casa Grande not only got their first league win, but first win period.   They took out the frustration of an 0-5 start with a three touchdown first quarter in a 47-0 win over Ukiah.  Kevin Donahoe gained most of his 104 yards rushing on a 65 yard run to start the scoring.  Sophomore Spencer Torkelson also rushed 156 yards and two scores.

NCL I
No. 5 St. Helena 20 No. 7 Middletown 13
No. 9 Fort Bragg 33 Kelseyville 7
Cloverdale 20 Willits 8
Lower Lake 40 Clear Lake 24
The St. Helena-Middletown showdown lived up to billing with the Saints taking a 20-13 win to move into sole possession of first place in the NCL I race.  The Saints also join Windsor as the only two teams in the area that are 6-0.
This game had a defensive tone to it and the difference was St. Helena coming up with four turnovers.
The first was on fumble that was returned to the Middletown 3 yard line.  That set up the first one of three Jahaiver Otero touchdowns.
The game that was tied twice and had three lead changes.   Middletown score the next two touchdowns to take a 13-7 lead early in the third quarter.
St. Helena then went on the best drive of the night going 92 yards and ended with touchdown number two for Otero, tying the game at 13-13.
Middletown was looking for the go ahead score early in the fourth quarter driving into St. Helena territory.  The St. Helena defense came up big again, recovering a fumble at the 31.  Two minutes later Otero scored touchdown number three to give the Saints a 20-13 lead.
Besides the three touchdowns, Otero had a tough night being held to a season low 37 yards by the Middletown defense.  St. Helena quarterback Jack Preston picked up the slack going 10 of 13 for 189 yards passing and ran for 114 more.
It was homecoming night for St. Helena and a very memorable one.  Not only for the clutch Varsity win, but the JV team had just as clutch of a win, edging Middletwon 20-19.   After Middletown scored with 2:30 left to take the lead, Niko Lopez returned the kickoff 67 yards for the tying touchdown. He then kicked the winning point.  Earlier in the game Lopez kicked two field goals.
Both teams went into the game 5-0 on the season, which tells us that this won’t be the last big St. Helena-Middletown night.  The loss for Middletown was their first in fifteen games.
Fort Bragg gave up a 75 yard kickoff return to Devin Dugger to start the game.   After that it was all Timberwolves in a 33-7 win over Kelseyville.
Kaylor Sullivan continues to add to his big season by passing for 320 yards and four touchdowns to four different receivers.   Sullivan has passed for over 2,200 yards on the season and has 21 touchdown passes.
Greg Scaramella threw two touchdowns passes and Luke Bernardi rushed for another to lead Cloverdale to a 20-8 win over Willits.
After Willits scored to make it 14-8 with seven minutes left, Cloverdale went on a long drive and Bernardi’s touchdown put the game away with 1:21 left.
Isazah King rushed for three touchdowns and threw two more as Lower Lake defeated Clear Lake 40-24.  Three of the five touchdowns King was involved in were over 50 yards.
The win gives Lower Lake a 3-3 record.  Every team in the NCL I is at least .500.

SCL
No. 10 Petaluma 31 Healdsburg 28
El Molino 42 Elsie Allen 18
SATURDAY
No. 1 Analy (4-1, 1-0) at Piner (3-3, 0-1)
Non League
McClymonds 52, Sonoma Valley 0
Stealing a page from the Giants by doing things on even numbers, Greg Thomas kicked a 28 yard field goal with :02 left to give Petaluma a 31-28 win over Healdsburg.  All the scoring came in the second and fourth quarter.
Healdsburg, who is one of the hard luck teams in the area, rallied from a 21-7 first half deficit to take a 28-21 fourth quarter lead.   Before kicking the game winner, Thomas ran one in from 34 yards out with five minutes left to tie game.
Petaluma running back Yusef Kawasami did most of the damage to get the first half  lead, with touchdown runs of 35 and 64 yards.  Kawasami rushed for a season high 233 yards on 16 carries.  In the last two games he has rushed for over 400 yards and three touchdowns.
Healdsburg is now 1-6 on the season.  Three of its losses have been by three points including both of its league losses.
Petaluma has won four of five to raise its record to 5-2.
El Molino is 4-2 after 42-18 win over Elsie Allen.  The Lions trailed 6-0 after one before intercepting  four passes in the second quarter to take control.
El Molino actually wakes up this morning in sole possession of first place in the SCL race.   They are 2-0 which is a half a game ahead of Analy who is 1-0.
Analy is at Piner this afternoon.

NCL II
Tomales 28 Calistoga 13
SATURDAY
Upper Lake(0-5, 0-1) at St. Vincent (1-4, 1-0)
Willie Lepori returned the opening kickoff 85 yards for a touchdown as Tomales defeated Calistoga 28-13.  It was one of two first quarter touchdowns for Lepori as Tomales jumped out to a 20-0 lead.
Calistoga cut the lead to 20-13 at the half before Joel Gutierrez scored his second touchdown on a one yard run.
Tomales is 5-1 on the season and it looks like they will end the first half of league play with a first place showdown with St. Vincent next Friday Night.
My email address is jacpasquini@comcast.net
Share