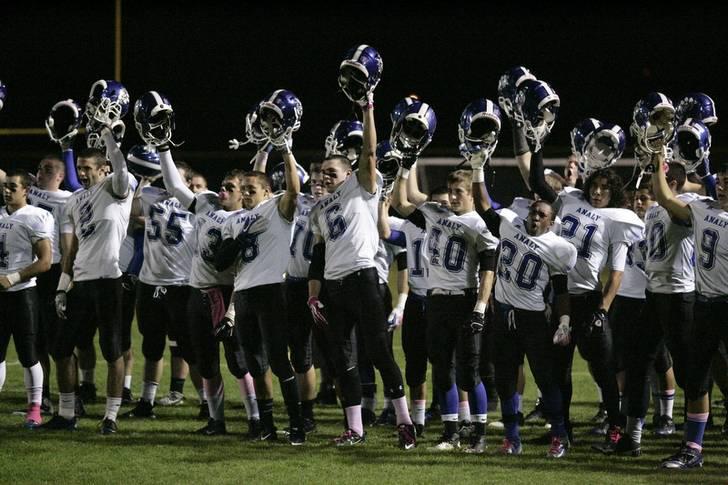 On opening night, the teams from the NBL, SCL and NCL world that we cover, went 6-1 against teams outside the area.  The impressive stat was made more impressive with the kind of wins.

It was a foregone conclusion that Analy wasn’t going to win this game.   The story would be about, after one game Analy having as many losses as they did all of last season

The game in Analy itself would have been a big one for the local fans to brag about had nothing else on the evening gone right.

A lot of the rest of the evening went pretty right.

Pittsburg cut a 23-7 halftime lead to 23-21 early in the fourth quarter.  Analy responded with a 70 yard drive that ended when Jacob Royer, who passed for 250 yards, threw his second touchdown pass.

Ja’ Narrick James rushed for 116 yards and two touchdowns.  Both of the touchdowns came in the first half.

Pittsburgh was ranked as high as No. 3 in the pre-league Bay Area polls.

As impressive as the Analy win was, it is a close call for win of the night.

It didn’t appear Windsor would be one of the possibilities for good wins, then got a great one.  The Jaquars were behind 29-7 and rallied twice to stun Granada.

Colin McAlvain threw for 332 yards and three touchdowns.  Windsor scored 25 unanswered points in the second half to take a 32-29 lead.

It still looked like it would be disappointment when Granada regained the lead with 1:30 left.  Windsor then went 80 yards and scored with :08 left on a six yard run by McAlvain.

The two teams combined for 800 yards of total offense.

Scoring was the norm for opening week with four teams scoring at least 40 points.  Two of them hit the 50 mark.

One of them was Montgomery who won big over Pinole Valley in Dean Haskins first game as head coach.

It was the most points Montgomery scored since the end of the 2010 season and nearly a third of the points they scored all of last year.

It was Montgomery’s first opening game win since 2007.

The offense did a little of everything.

JuJuan Lawson completed passes to eight different receivers while passing for 198 yards and two touchdowns.  He also had a rushing touchdown.

The big rushing plays belonged to John Porcivina.  Casa Grande put the game away with a 17-0 third quarter.  Porcivina scored both touchdowns in the quarter on runs 61 and 82 yards, which was a big bulk of his 186 yard rushing night.

In opening the season the last two years, Casa Grande has outscored Eureka 94-27.

Cardinal Newman led 35-0 in the third quarter and 41-14 with six minutes left.

Calistoga was the other team that hit 40 in its win over Cloverdale.  It was a close game until the fourth quarter when Calistoga scored four touchdowns.

Santa Rosa is loving opening the season with Petaluma.  They are now 10-21 over the last four seasons, 4-0 against Petaluma.

Vince Jones threw three touchdowns, rushed for another and Jahii Hayes rushed for over 100 yards in the first half as Santa Rosa took a 27-0 halftime lead.  Hayes ended up with 138 yards for the game.

It is a promising start for El Molino, who equals its win total of 2012.  The defense pitched a shutout and scored two touchdowns on interception returns.  The two, Louie Rampone and Lani Gaspar, also caught touchdown passes from Steven Mori.

To show there was some defense El Molino was one of two teams to record a shutout.  The other was St. Helena in its win over Tomales.  The St. Helena defense held Tomales to four first downs.  The offense was taken care of by Sebastian Sequara who rushed for 149 yards and two touchdowns.