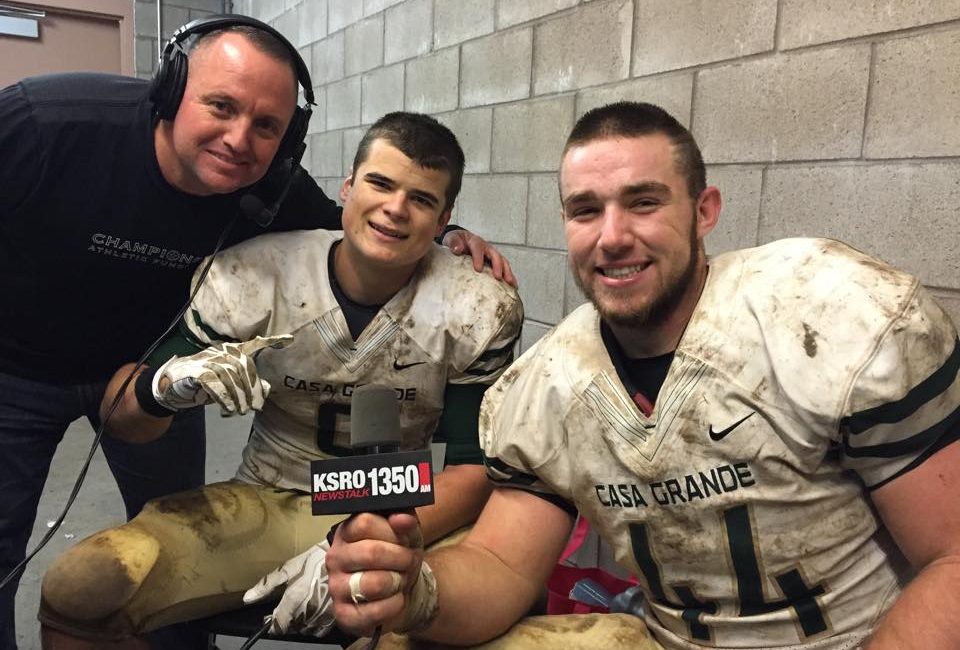 Something seemed wrong with this high school football season two months ago.
For over the past decade, one thing that has been a weekly story in the Fall is what the Casa Grande football team is doing, because they have always been in the middle of things.
This season, it was the 0-5 start, which turned to 1-6.  It wasn’t that they didn’t earn that start.  Every game was decisive.  There was no thinking about “if” this would have happened, maybe the game would have been different.
The season turned around on October 24th when they defeated Maria Carrillo 19-14.  The headline game that week was Rancho Cotate handing Windsor its first loss of the season.
Since then it hasn’t been the same Casa Grande team.   It has been a step back to the last decade, as they haven’t lost since.
In the second round of the NCS playoffs, they were at the same place that they were when the season turned around,  at Maria Carrillo and got the same results taking a 17-14 win.
It wasn’t the same formula as the first meeting.  In that one, they led from the start and held on.  In this one it took a big fourth quarter to pull things off.
One thing that was similar to the first meeting was the Casa Grande defense, which has been a main theme for the dominant Casa Grande teams over the past decade.  They were the only team that bottled up Maria Carrillo running back and NBL Player of the Year Alex Netherda.
Despite the defense, going into the fourth quarter, Netherda had the only touchdown in the game and Maria Carrillo had a 7-3 lead, as the Pumas defense matched the Casa defense.

There was a couple of scoring chances in the first half, mostly by Maria Carrillo.   In the second half it turned into an old fashion kind of game you don’t see much of these days.  With most of the fields now the fake stuff, there aren’t too many games that are on a muddy track.  Heck with the drought, you haven’t seen many wet games period.
The third quarter turned into a punt fest with Casa Grande on the wrong end of the field position battle.
There they were late in the third quarter starting a drive on their own ten yard line.   That was when the game turned.  Casa Grande quarterback JJ Anderson, who only completed five passes on the night, connected on a 32 yard pass play by Joey Markam.   That got Casa Grande going and they didn’t stop until Casey Longaker scored two fourth quarter touchdowns to give them a 17-7 lead with three minutes left.
Maria Carrillo would get another touchdown from Netherda, which would set up an onside kick that Casa Grande recovered to  put the game away.
It ended one of the best seasons in Maria Carrillo history as they finished 7-5 and hosted a NCS Division2 playoff game for the first time in school history.
For Casa Grande it is business as usual.   After the brutal start, they are now 6-6 and going to the NCS Semi-Final round.  What is coming up next is not a fun prospect, going to No. 1 Clayton Valley.
It is better than not having a practice on Thanksgiving Day.

SATURDAY 1 PM
No. 7 Rancho Cotate (9-3) at No 3 Marin Catholic (9-3)
We are used to seeing Analy scoring.   Usually in bunches and they have what they need by halftime and then some.
In the second round game against Acalanes, they scored often.   The only twist in this game was that they needed to or the season would be over
It isn’t over.
Analy’s offense did it when it had to, as they defeat Acalanes 49-41.
It was a game they never trailed and after a 7-7 score, they were never tied.   But that is because the offense wouldn’t let them.
The Acalanes offense wouldn’t go away, but Analy always had the answer.
Will Smith passed for 362 yards and four touchdowns.   The yardage is his second highest total of the year.   What made this different is it wasn’t window dressing.  He needed every yard, every touchdown pass.
It was to the same cast that has been running up big offensive numbers all season.
Ja’ Narrick James and Kerr Johnson Jr. each scored three touchdowns.   Johnson scored what turned out to be the winning touchdown with nine minutes left on a 50 yard run.  Both James and Johnson Jr had over 200 yards in offense by themselves.
It was an impressive performance in a pressure situation.
The win puts Analy in a NCS Division 3 playoff game for the third straight season.   The Tigers will travel to No. 1 Campolindo next, Friday Night.
DIVISION OVERVIEW…The combined record of the four teams is 41-7.  That ties Division 4 for having teams with the best record to make the final four.

VOLLEYBALL CHAMPIONSHIP SATURDAY
DIVISION 2— at No. 1 Redwood 3 No. 2 Maria Carrillo 0
Redwood wins its third section champion in four seasons.  It is the second time they have beaten Maria Carrillo in the championship game.
DIVISION 3—No. 3 Sonoma Valley 3 at No. 1 Campolindo 1