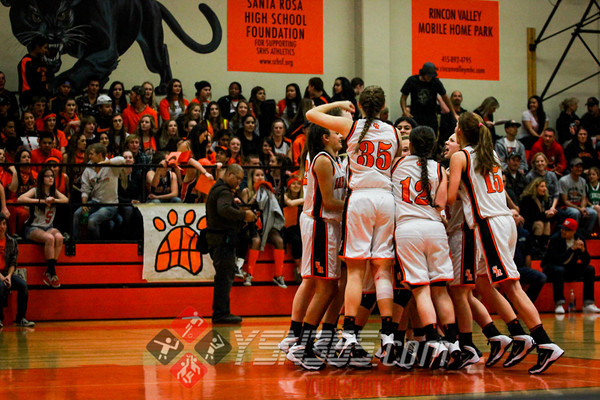 Davecox
As reported on the YSN365.com facebook page on Friday, Steve Chisholm has resigned as the head coach of the Santa Rosa Girls High School Basketball team.
Chisholm, who has been head coach at Santa Rosa for nearly a decade, says he is having some personal and health problems and that it was a tough decision and that over the last eight or nine years it has been all basketball and it has taken its toll.  He said his life revolved around basketball and he needs to get it back.
If you haven’t followed local sports all that long, you might think that the Santa Rosa High School Girls basketball program being good is just the way it is.
That isn’t exactly true.
When Chisholm took over the Santa Rosa Girls program, he must have thought, what have I gotten myself into. They had a program that the area or his opponents didn’t worry about.
Chisholm made his Santa Rosa debut on November 25th, 2006 and it was a losing one to Healdsburg 55-30. That was a normal kind of game for the Santa Rosa program. Actually it was one of the team’s better efforts. They would start the season 2-2.   That was as many wins as they had two years earlier. The Panthers would finish 7-19 overall and 3-11 in NBL play. One of the three league wins was by forfeit.
That season Maria Carrillo and Montgomery tied for the regular season championship.  They were the standard of the league.  Santa Rosa’s closest game in the four losses against the two teams was to Maria Carrillo 70-44.
The thought of NBL titles and NCS appearance seemed like a fantasy.
Things started to change the following year as the Panthers went 11-15 overall and 7-7 in league play.  There were still the ugly one sided score losses, but they were actually a contender for the NBL post season tournament, before just missing in the last week.
That was the stepping stone.
In 2009 they made the NBL post season tournament and the North Coast Section playoffs.
In 2010 they did it again.   In fact they finished second in the NBL race and it was considered an upset when they lost a home game to Maria Carrillo in the first round of the post season tournament.
The breakthrough season was in 2011 when they went 23-9 overall and 12-2 in NBL play.  The won the school’s first NBL championship since 1989 and followed up with the NBL Post Season Tournament Championship, which was the first since 1995.  That started a run of three NBL titles in four seasons.
In 2013 they won a NCS playoff game.
He leaves after having his best team in 2014.  They went 28-5 and tied for the league championship with Cardinal Newman.
The numbers for the program speak for themselves, but that wasn’t it.  Before Santa Rosa became relevant it was normal that even the biggest of Girls Games were played before barely half full gyms.   The Santa Rosa fan base came out in numbers that didn’t seem possible for a Girls Basketball game. It was thought that last year’s home game with Cardinal Newman was the biggest Girls crowd in the area’s history.   Later in the season when the teams met at Cardinal Newman the crowd was almost as big.  They were packing gyms, at home or on the road, and in the three years they made the NBL post season championship game at SRJC, the crowds broke records for the Girls Basketball game.
The program went from barely noticeable  a combined to a e standard of play and the atmosphere at games that may never be repeated again.
SATURDAY FOOTBALL RESULTS
JC FOOTBALL
No. 5 SRJC 32 Sacramento 31
SRJC raises its record to 3-0 rallying to edge Sacramento 32-31.
After taking a 3-0 lead into the second quarter, SRJC fell behind 24-10 with one minute left in the first half. Christian McAlvain threw the second of three touchdown passes on the last play of the first half to cut the lead to 24-17. It ended a second quarter that the teams combined for five touchdowns and a field goal.
Sacramento still carried a 31-19 lead into the fourth quarter. McAlvain threw touchdown number three to cut it to 31-26 with twelve minutes left. After a Sacramento missed field goal and an interception by Po Gore, SRJC scored the game winner on a 21 yard run by Desmond Nisby with 4:35 left.
There are no stats of the game available at the moment.
SRJC will next be in action next Saturday at 5 pm when they host Laney.   It is the first of two straight home games before they open Bay 6 league play on October 18th when they travel to San Mateo.
SATURDAY HIGH SCHOOL SCORES
Piner 54 Burton (SF) 0
Tomales 16 Balboa 14
Piner had the kind of game that was the theme of the weekend and are 2-2 following a 54-0 win over Burton of San Francisco.
Isaiah Carter rushed for 187 yards and started the scoring with runs of 38 and 59 yards, which were part of a 26-0 first quarter.
The closest game of the weekend was the 14-12 Tomales win over Balboa. Wily Lepori rushed for 175 yards on a school record 44 carries.   He also scored a touchdown on a four yard run in the second quarter which gave Tomales a 16-0 halftime lead.
Tomales Is 3-1 on the season.
FRIDAY SCORES
No. 1 Analy 42 No. 5 Montgomery 21
No. 4 Rancho Cotate 56 American Canyon 22
No. 7 St. Helena 27 St. Vincent 21
No. 9 Petaluma 42 Jefferson (Daly City) 7
No. 10 Middletown 26 El Molino 7
Fremont (Oakland) 20 Sonoma Valley 0
Deer Valley 48 Santa Rosa 0
Sutter 56 Ukiah 0
Piedmont 42 Healdsburg 14
Willits 58 Elsie Allen 6
Lower Lake 59 Upper Lake 0
CSD Fremont 41 Calistoga 0
My email address is jacpasquini@comcast.net
Share