NEAT PACKAGE: CLOVERDALE WINS THRILLER and THEIR OWN TOURNAMENT 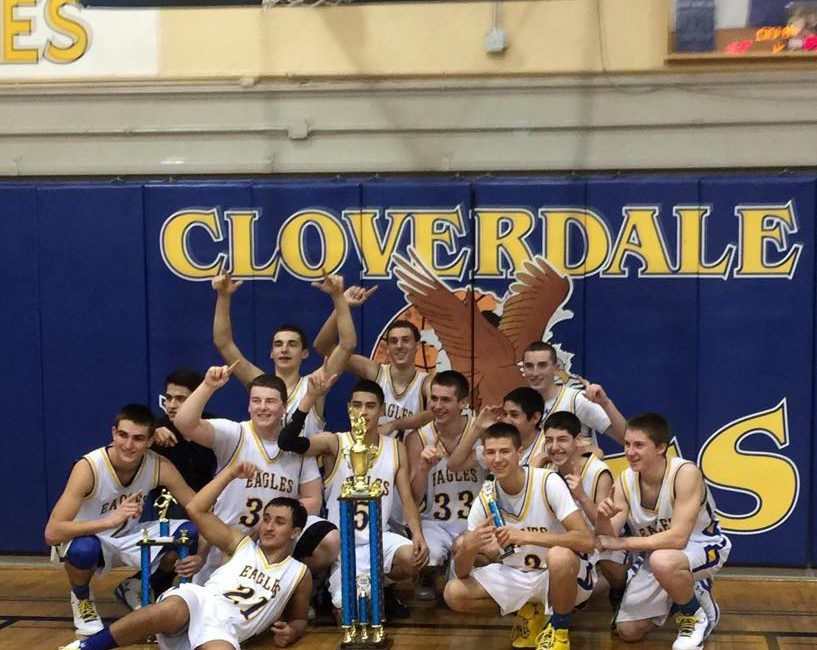 
This Cloverdale-Granada thing is something else.
For the second straight, year they played a game that wasn’t decided until the buzzer sounded for the Cloverdale McMillan Holiday Invitational Tournament Championship.
Last year Granada was a late invitee to the Tournament because a team dropped out late.    On paper the school is a little bit out of place in this tournament.   They are a division 1 school that almost has more people going to its school, than the other seven school’s that were in the tournament combined.    Heck they are in the same league as De La Salle.  They aren’t a dominate team in that league, but they aren’t too bad either, finishing over .500 in league play the last three seasons.
Off paper they fit into this tournament very nice.
In last year’s championship game they rallied from an early deficit and broke Cloverdale’s heart with a 57-56 win on a buzzer beater.
Granada liked the experience of the tournament so much they asked to come back.  The team spent the last four days, which included the big storm, at a hotel in Cloverdale.  Once they got around to the basketball they were back in the championship game against Cloverdale.   This time it was Cloverdale who rallied from an early deficit, but as the game went down the stretch, Granada was set up to do it again.
Not this time.
Three defensive stops in the last thirty seconds helped Cloverdale hold on for a 54-52 win to give the Eagles their first championship in the tournament they host since 2010.

It also set up a Hallmark moment in the ceremony at the end of the tournament.  John McMillan, who coached Cloverdale for over two decades and to over 400 wins, which included two state championships, handed the Most Valuable Player Trophy to his grandson with the same name.
It was a crazy trip to get to that moment.   Of course, because of the big storm that roared through here on Thursday, everything was pushed backed a day and forced most every tournament in the area to have a two round Saturday.
The action in Cloverdale started at 10 am.   Amazingly seven games later the championship game started at the planned time of 8:30.
It didn’t take long for the two teams to prove that they go together.  In the first five and a half minutes there were seven lead changes and one tie.   That is when Granada guard Kameron Johnson made a run to become MVP of the tournament for the second straight year.  He scored nine points of his game tying high 21 points in a 14-1 run, which gave Granada a 28-17 lead midway through the second quarter.
Cloverdale responded with three straight 3 point shots to cut the lead to two.  Two of them were by Jayson McMillan, John’s younger brother, who was on his way to a team high 18 points.  It was part of a three point first half barrage for the Eagles, who had nine first half field goals, seven of them were from three point range.
Granada scored the last four points to take a 32-26 lead at the half.  Then, blame it on the third game in twenty four hours and the second of the day or blame it on tough defense – either way it took over three minutes for a score in the third quarter.  Granada scored it on two free throws to get the lead back to eight.  It is a lead they kept most of the second half until Marcus Poe scored, capping an 8-2 run with a little over two minutes left to give Cloverdale its first lead since the first quarter at 51-50.
After Granada scored to retake the lead, Poe, who scored six of his ten points in the fourth quarter, was fouled underneath after taking a super pass from John McMillan with: 41.7 left.   Poe hit both free throws, which turned out to give Cloverdale the lead for good.

Granada had its three chances to either take the lead or send the game into overtime.  All three chances were basically the same play, that had 6’ 5” Collin Stafford, who scored 21 points and was a MVP contender himself, driving down the right side of the lane.  Each time the Cloverdale defense stood tall.
Cloverdale got the rebound after the first shot, but Stafford made a nice steal and save on the baseline, which set up the second shot.  On that drive, Poe stuffed it which Cloverdale got the loose ball.  Granada had to foul twice to get Cloverdale into the bonus.   The last foul put John McMillan at the line in with :07.9 left.   McMillan hit one of two to make it a two point game and after a time out, there was Stafford going down the lane again only to be stopped again.  John McMillan gobbled up the rebound and Cloverdale had its championship.
The game ended the almost twelve hour day which featured eight games.
It also set up the Hallmark Moment.
JOHN MCMILLAN INVITATIONAL
SATURDAY RESULTS
FIRST SESSION
Berean Christian 54. St. Helena 46
Clear Lake 66 St. Vincent 58
Granada 70 Roseland Prep University 57
Cloverdale 60 Balboa 47
SECOND SESSION
7th place …St. Helena 54 St. Vincent 51
Consolation…Clear Lake 71 Berean Christian 42
3rd place … Roseland University Prep 58 Balboa 51
Championship …Cloverdale 54 Granada 52
The Cloverdale tournament was just one tournament in a long day of basketball.

FOLSOM CLASSIC
SEMI-FINAL…Folsom 53 Montgomery 36
3rd place…Montgomery 57 Vista Del Lago 45
The rematch with Folsom wasn’t as close as the championship game at Montgomery was last week.   Neither was the third place game as Montgomery had a thirty point lead in the third quarter.

ARCATA INVITATIONAL
Consolation…Piner 68 Fortuna 59
Keith Adams scored 26 for Piner who go to 4-2 on the season.

GIRLS
LADY HORNET INVITATIONAL AT ALAMEDA
FIRST SESSION
Montgomery 65 Newark Memorial 57
Windsor 50 Arroyo 36
Consolation…Windsor 41 Montgomery 36
Hannah May and Jessica Barbosa were named to the All-Tourney team for Windsor.  May scored 23 points in the win over Arroyo.
Abby Lea, who scored 23 against Newark Memorial, was name to the All-Tourney team for Montgomery.
My email address is jacpasquini@comcast.net
cloverdale eagles,john mcmillan,mcmillan tourney,rose city recap,ysn365.com
Share