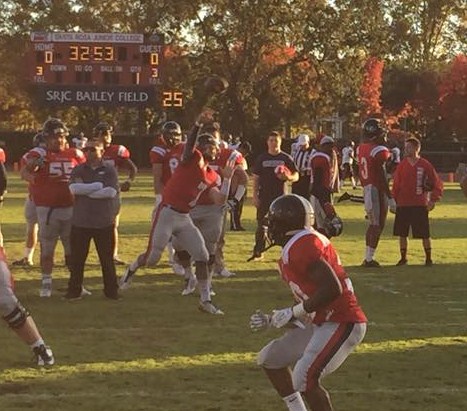 This morning at 11 am the picks for the NCS Football playoffs will be announced.
Here are some thoughts about what I think might happen.  Some of it will be right and some of it will be wrong.
Some of it will be real wrong.
I haven’t seen anybody nail completely what the committee has decided to do.
This was posted Sunday Morning, so some of you will be seeing this for the first time after the picks are made.
Be easy on the grade.
Also at the bottom is the Saturday recap which includes the story on St. Vincent wrapping up the NCLII race.
DIVISION 1
This division belongs to De La Salle.  No local teams in it.  Local or not, that is the only commentary anyone has to make on this.
DIVISION 2
The division belong to Clayton Valley and Concord of the Diablo Valley League who will be the No. 1 and 2 seeds..   Clayton Valley is 10-0.  Concord is 8-1 with its loss to Clayton Valley.
The power rankings are a guide only.  Clayton Valley and Concord’s numbers are well ahead of the field in those computer numbers.   If Clayton Valley doesn’t defeat Concord in the championship game, there will be a major upset along the way.
Where they will line up behind those two is anyone’s guess.
North Bay League teams are three of the next four teams in the power rankings.  They are Windsor, Maria Carrillo and Casa Grande.  In between is Northgate, who is also in the Diablo Valley league.
The committee likes head to head scores and looks at how the team finishes to help with the order of things.
The only thing that Northgate has going for it is strength of schedule.   The only problem is every team they played over .500, they lost to in one sided games.   For example, they lost to Clayton Valley 70-7 and to Concord 62-27.  They also have lost four of five to finish at 5-5.
That looks promising for the NBL teams.


Casa Grande, Maria Carrillo and Windsor ended up tied for third in the North Bay League.  Casa Grande has the schedule, although like Northgate they weren’t in most of those games.   One of the losses was to Windsor 27-7.   That will hurt a bit in the seeding process.  It won’t hurt as much, because all those losses were at the beginning of the season.   They have ended strong going 4-1.  Maria Carrillo also has finished 4-1 with one of the wins over Windsor and the loss to Casa Grande.
It is a tossup what order these three teams will end up in, but they all should be higher than Northgate.  The three game losing streak to end the season won’t help Windsor.
My guess is No. 3 Maria Carrillo, No. 4 Windsor (because of their win over Casa Grande was so one sided) and No. 5 Casa Grande.
That leaves Montgomery, who three weeks ago looked like a sure thing to get a home game in the first round.  Two one sided losses later, they are a bubble team for that home game.
Their competition for the home game appears to be Granada, who is 2-8 and 1-5 in the East Bay League, which is a league that has five Division 1 teams.  They are another team leaning on their schedule, obviously not the record.  They scored some value points last week when they were defeated by Foothill 28-21.  Foothill tied for the league championship and could be a No. 2 seed in Division 1 behind De La Salle.
Granada started the season with a 30-10 loss to Windsor.  Montgomery lost to Windsor 10-7, so common opponents barely favors Montgomery.
Another team to consider is Mt. Eden who is 7-2-1.  The two losses are to 10-0 teams, one highly rated, the other one no so highly.
I have a feeling that Montgomery will be traveling in the opening round.
DIVISION 3
Like Division 2, the top two seeds will be from the same league.  The league is the Diablo Foothill and No. 1 is Campolindo (10-0) and No. 2 Las Lomas (8-2).
The rest is a roll of the dice.
Sometimes the committee will go with the most attractive game, even if the seedings doesn’t make sense to most.  There are a lot of times in which people don’t understand some of picks anyways.


That is why in this case I think Rancho Cotate will be No. 4 and Cardinal Newman at No. 5.  That would set a second round matchup between those two teams.   Rancho Cotate would be higher because of the head to head win.   Cardinal Newman would get the home game because of the tie-breaker win.  That is of course if they win in the first round.
Petaluma will be a double digit seed and the guess is they will travel to Cardinal Newman or Rancho Cotate in the first round.
That leaves Analy.  I think they will be seed lower then both Cardinal Newman and Rancho Cotate.  The schedule ranks very low and the one loss they do have was a 55-14 score.   I wouldn’t be surprised if they are No. 7.
DIVISION 4
This is the only division that doesn’t have a clear cut No. 1 seed.   One of three teams has a shot.   None of them are local.
Justin Siena has the best resume, but the worst record.   Piedmont is 10-0, but the schedule doesn’t have a lot of power and St. Mary’s (9-1) is No. 1 in the power rankings.
Of the local teams, Fort Bragg will be the highest seed.  TheNCL I champion will have a home game and that could be against a local team.   Fellow NCL I team Lower Lake and the SCL’s Piner are right in the range where they could be the first round opponent for Fort Bragg.  Lower Lake and Piner will be double figure seeds and be on the road.
El Molino is between those teams and is a bubble team for a home game.  The guess here is they will be traveling.
One other team eligible is Kelseyville who is a team on the bubble.   If they make it they could be playing whoever is the No. 1 seed.
DIVISION 5
We are back to an easy pick for the No.1 seed.   That will be defending champion Salesian, who went 8-2.  The two losses were to power houses.  One was to McClymonds by a 32-22 score.  That is the team that beat Analy 55-14.
This is the seventh year of this format, in which the East Bay and North Bay are combined in the playoffs.  Each of the other years this division has a maximum of eight teams in bracket and some years they didn’t have eight.  That is what I thought it was until late in the season until I was corrected by an YSN fan.
There can be up to sixteen teams.   This probably won’t be the only bracket that this will happen in, but there won’t be 16.
The power ranking numbers are not nearly as high as teams in other divisions.  The Salesian number has is about the same as the highest number in Division 4.  The rest of the numbers drops off quite a bit.
The highest local seeded team is in this bracket and that will be St. Helena at No. 2.   The Saints will probably get a first round bye.
After St. Helena, the power ranking numbers get close.   Middletown is No. 3, barely edging out St. Bernard’s.  Middletown looks like a solid choice for No. 3, which might also be a first round bye.  They have a better schedule and the NCL I rates higher than Humboldt Del Norte 4, the league that St. Bernard’s is in.   St. Bernard’s is from Eureka and coached by former Piner head coach and Windsor assistant Matt Tomlin.
Cloverdale is close to a bubble team, in more ways than one, to host a first round game.  It appears they should get a home game, unless they matchup against St. Vincent, who is the NCL II champion (details).  St. Vincent will be a double seed and renew the yearly cries about league champions getting to host playoff games no matter what the seeding is.
Tomales is also eligible.  They will probably meet the highest rated team that doesn’t have a bye.

NCL II
St. Vincent 49 Tomales 21
St. Vincent shook off a slow start and ran past Tomales 49-21.  After an 0-4 start, St. Vincent has won six straight.   They also win the NCL II championship finishing the league race 6-0.
Tomales falls to 7-3 and 4-2 in league.  Both of the losses were to St. Vincent.
Both teams will be in the NCS Division 5 playoffs.
Quarterback Joel Gutierrrez threw one touchdown and ran another one in to give Tomales a 12-0 first half lead.
St. Vincent scored on a touchdown pass from Dominic Pedersen to George Sammons making it 12-7 by the half.  That opened the floodgates and Sammon’s did most of the flooding.  The senior running back rushed for a season high 203 yards and three touchdowns.   He is now over the 1,000 yard mark for the season.
It is the third straight league championship for St. Vincent, the first of those three that they didn’t share the title.

JC FOOTBALL
No. 11 SRJC 45 Foothill 28
SRJC got off to a slow start, but were never really threatened in a 45-28 win over Foothill.
Former Windsor quarterback Christian McAlvain threw for 301 yards and three touchdowns.   He also rushed two in.  Brandon Singh (Casa Grande) had his biggest game of the season hauling in eight balls for 126 yards and two touchdowns.
A Foothill touchdown cut the SRJC lead to 21-14 with nine minutes to go in the second quarter.  SRJC scored the next 17 points.  One of the touchdowns was on a 20 yard pass to wide receiver Terrence Drew on leaping grab in the back of the end zone, barely getting a foot down.  A big time catch
SRJC is 7-2 overall and 2-2 in Big 6 league play. That puts them in a third place tie with Diablo Valley, who is where SRJC will end the regular season with next week.
Foothill falls to 1-8.
A championship game for the Big 6 is set up.  No. 2 San Mateo and No. 4 San Francisco both won and are 8-1 overall and 4-0 in Big 6 play.  The two meet next week in San Francisco.   The winner will be in the State Playoffs.
Speaking of the state playoffs there was a shake up on Saturday.   No. 1 American River lost its first game of the season to No. 8 Butte 31-28.  Butte won the game despite being outgained by nearly 300 yards.  American River had six turnovers.  Butte had none.
Butte scored two touchdowns in a :17 stretch of the second quarter to take a 17-7 lead.  To scores those they gained one yard, recovering a fumbled punt at the one to set up the first one and on the next play returned an interception for a touchdown.
American River did come back to take a 21-17 lead, but didn’t have it very long as Marvel Harris returned the ensuing kickoff 95 yards to give Butte the lead for good.
Earlier this season Butte was No. 1 in the state before losing a 24-17 overtime game at SRJC.