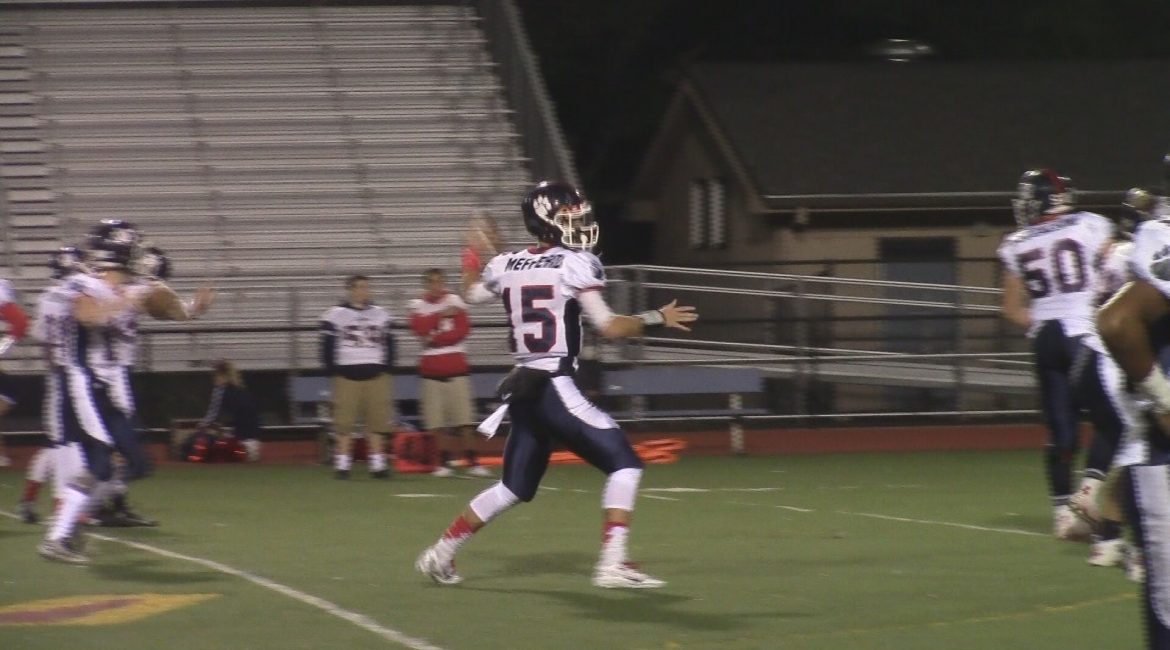 It was an evening in which we found out how dominating and good the No. 1 seeds are in most of these North Coast Section Football Playoffs.  When they are all said and done, it may be the best collection of No.1 seeds these playoffs have ever seen.   That will take some research and of course, there are few rounds to go, to find out whether that is the case.
For now let’s forget about that and focus on the positive.  If you are in Rohnert Park today and see some people with a skip to their step and a smile on their face, they may have survived fighting the Friday Afternoon traffic jam to the East Bay.
That doesn’t sound like fun.
The fun part was seeing No. 7 Rancho Cotate survive to play another game, defeating No. 2 seed Las Lomas 44-34.
It was the kind of game we are used to seeing from Rancho Cotate this season, where the offense was unstoppable and the defense did just enough.
The action started on the opening kickoff.


If you were wondering if after an active week, which included a full ride offer to Louisville, if Chris Taylor-Yamonoha would have anything left, he answer that on the opening kickoff, returning it 78 yards to set up the first score, which was a 8 yard run by Carlos Franco.
The run also set up an offensive first half in which the toughest thing when it came to scoring points was to convert extra points.  Not that they were bad at that, both teams were just too good on offense.
With five minutes to go in the second quarter, Gunner Mefford hit Justin Zinnerman for a 55 yard touchdown to give Rancho Cotate a 20-13 lead.   Up to that point, each team had scored each time they had the ball and had missed one extra point.
On the next series we found out something about Las Lomas that we didn’t know up until then.  They have a punting team.  The Rancho Cotate defense was the first one to hold and the first punt of the game came with 1:05 left in the half.  That seemed really important because the Knights would have the ball to start the second half.
Las Lomas would take advantage of that to score on its possession, to tie the game at 20-20.  Rancho Cotate came right back to score on a five yard run by Oscar Nava.  That turned out to give Rancho Cotate the lead for good.

On the next series, the defense forced punt number two and soon after Taylor-Yamanoha scored his second touchdown, this on a 15 yard pass from Mefford and Rancho Cotate has a 34-20 lead with two minutes left in the third quarter.
There would be a little more suspense after a Rancho Cotate punt (yes they do have a punt team) was partially blocked, which set up Las Lomas in great field position.  Las Lomas scored to cut it to 34-27.     The offense that has been so good this year, then came through with a drive for points.   Keven Nguyen kicked a clutch 31 yard field goal to make it 37-27 with 4:14 left.
Las Lomas was now in panic mode and the Rancho Cotate defense came up with the play to seal the game.  Danny Shelton intercepted his second pass of the season and Franco put the nail in the coffin with a 41yard touchdown run.
Franco ended up with 151 yards and the two touchdowns.  That puts him over the 1,000 yard mark on the season.  Mefferd was 13 of 19 for 185 yards and three touchdowns, two of them to Taylor-Yamanoha, who caught 8 balls for 98 yards.
Rancho Cotate has overcome more adversity off the field than on, losing the weird tie-breaker to Cardinal Newman for the NBL title, which forced them to go on the road for a first round game.
But when all is said and done, they will have a game next week.

NCS DIVISION 2
No. 1 Clayton Valley 69 No. 8 Montgomery 19
No. 2 Concord 48 No. 10 Granda 23
If there was one slim bit of hope that Montgomery would make this a game, it came in the first quarter when Ke’Shawn Walker returned a kickoff 87 yards to the Clayton Valley 6 yard line.  That happened halfway through the first quarter and Clayton Valley already had a 14-0 lead.
The Clayton Valley defense pulled off a goal line stand.  Two minutes later it was 21-0 and by halftime 42-0, on the way to a 69-19 win fro the Ugly Eagles.
The only bright side after the kickoff return was that RJ Flores threw two second half touchdowns as Montgomery had a 19-7 streak.
Montgomery ends the season 5-7.
SATURDAY (7 PM)
No. 5 Casa Grande (5-6) at No. 4 Maria Carrillo (7-4)
KSRO 1350 AM/103.5 GAME OF THE NIGHT
CALPREPS PROJECTION: Maria Carrillo by 3

No. 11 Pinole Valley (5-6) at No. 3 Windsor (8-3)
CALPREPS PROJECTION: Windsor by 23
DIVISION OVERVIEW:  One step closer to the Clayton Valley-Concord rematch.

NCS DIVISION 3
No. 1 Campolindo 56 No. 8 Cardinal Newman 14
No. 7 Rancho Cotate 44 No. 2 Las Lomas 34
Nick Fedelli went for an 80 yard touchdown on the first play of the game and it was all Campolindo after that as the Cougars defeated Cardinal Newman 56-14.
After falling behind 14-0, Cardinal Newman scored on a 1 yard run to get back in the game.  After another Fedelli score, Cardinal Newman looked like they were going to stay in the game driving to the 2 yard line, before being stopped on a goal line stand.  Campolindo went 95 yards for another score.
Campolindo did basically what they wanted on offense.  They had over 300 yards in passing and rushing  on the night and nearly 500 yards total offense in the first half.
Cardinal Newman ends the season 8-4.
SATURDAY
No. 5 Acalanes (8-3) at No. 4 Analy (10-1)…7 PM
CALPREPS PROJECTION:  Analy by 7

No. 6 Alhambra (8-3) at No. 3 Marin Catholic (8-3)…1 PM
CALPREPS PROJECTION: Marin Catholic by 13
DIVISION NOTES…Rancho Cotate will meet the winner of today’s Alhambra-Marin Catholic game. Either way they will go on the road.  If Marin Catholic wins it would happen next Saturday at 1 pm.
NCS DIVISION 5 FINALS
No. 3 St. Helena 30 No. 11 St. Patricks-St. Vincent 18
No. 5 Stellar Prep 22 No. 4 Middletown 14
A split decision for NCL I schools.
Things got a little nerve racking for St. Helena in the fourth quarter, but they regained their footing and went on for a 30-18 win over St. Patrick-St. Vincent to advance to the semi-final round.
St. Helena had dominated the first three quarters.  Two Jack Preston touchdown passes and a field goal gave them a 16-0 lead.    That was almost all wiped out when St. Patrick-St. Vincent scored two touchdowns in a little over a minute early in the fourth quarter to cut the lead to 16-12.
But with the season on the line, the St. Helena’s offense and defense came through.  First it was Preston, this time going 53 yards for a score.  Then on the next play, Jack Flood intercepted a pass and returned it 17 yards for a score and St. Helena was on the way to the next round.
Preston’s touchdown run was part of a Saints offense that rushed for over 200 yards.  The majority of it by Jahaiver Otero who had 116 yards in the first half, before leaving the game with a foot injury.
St. Helena is 11-1 on the season and ties a school record for the most wins in a season.  They can break that mark next week in a Division 5 semi-final game.
The news wasn’t as good for Middletown.   Cameron Buston threw a touchdown pass with two minutes left to give Stellar Prep a 22-14 win over the Mustangs.
Buston, who from all reports will be going to San Jose State, had ran one and threw one earlier.  The throw was the game changer.   With Middletown leading 14-6, he connected on a 40 yard score to Chandler Gumbs, with :08 left in the half.  A two point conversion made it a 14-14 halftime score.
Middletown hurt itself with two fumbles in the red zone and their season ends at 8-4.
SATURDAY…1 PM
No. 9 St. Vincent (7-4) at No. 1 Salesian (8-2)
CALPREPS PROJECTION:  Salesian by 37