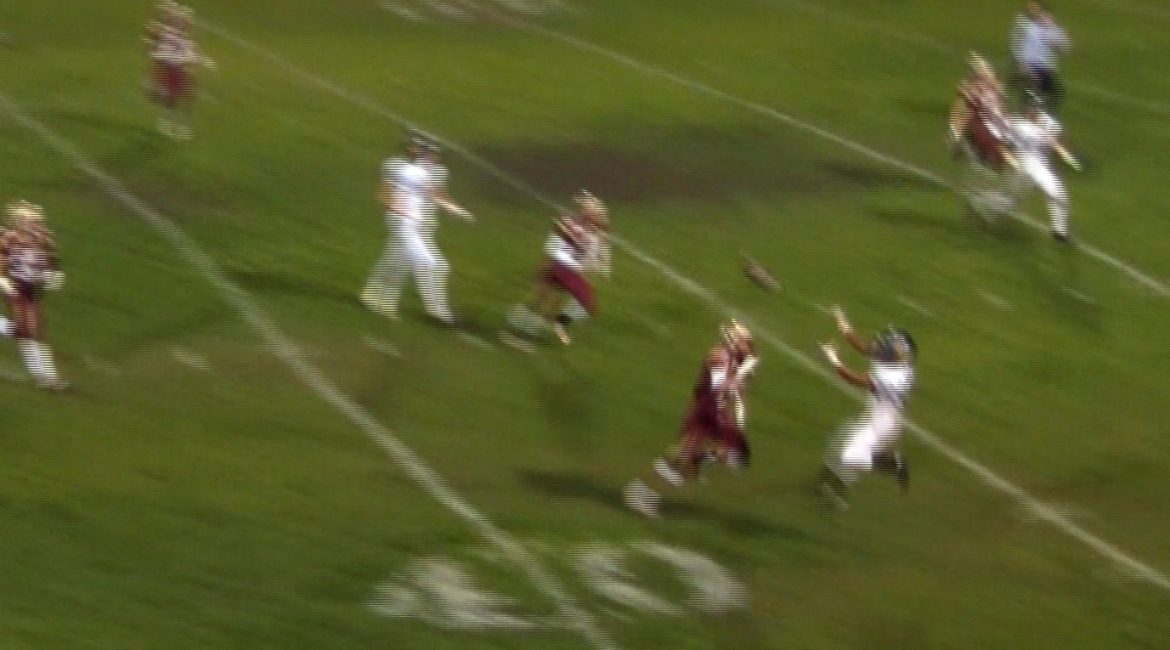 I want to start this re-cap by thanking the fans we have at YSN65.com.    It is playoff time and the fans have come out to help.  My phone was going crazy last night with playoffs going in football, soccer and volleyball all at the same time.
It was pretty overwhelming, especially considering how I was feeling physically.  I will give you more details on that in a “This and That” column coming up on Monday or Tuesday.
For now here is what I have for a Saturday that wrapped up a wonderful weekend for the North Bay League.
DIVISION 2
SATURDAY RESULTS
No. 5 Casa Grande 48 No. 12 Miramonte 6
No. 8 Montgomery 42 No. 9 Mt. Eden 34 (OT)
No. 10 Granada 55 No. 7 Northgate 26
No. 11 Pinole Valley 38 No. 6 Tennyson 18
FRIDAY RESULTS
No. 3 Windsor 35 No. 14 Dublin 9
No. 4 Maria Carrillo 49 No. 13 American 13
No. 1 Clayton Valley 61 No. 16 Newark Memorial 7
No. 2 Concord 60 No. 15 Hayward 26
This is going to be a different kind of a story about the only local team that went into overtime this weekend.  That was Montgomery, who after letting a big lead slip away, rallied to force overtime, before taking a 42-34 win over Mt. Eden.
This will be part of the “This and That” coming soon, but I ended up at this game with about three minutes to go in regulation.   I don’t have complete details of this game, but here is what I can tell you from the information from my contact and what I saw when I got there.
Montgomery scored two touchdowns in the last minute of the first half to take a 28-7 halftime lead.
Mt. Eden picked away in the second half and took a 34-28 lead with 5:57 left.   It was a six point lead, because the last extra point failed.  Montgomery tied the game with 3:43 left and they also failed on the extra point.
I got there in time to see Mt. Eden with the ball around midfield, with two minutes left, and they threw an interception.   Montgomery tried a couple of long passes, one was dropped at the 20 yard line before the game went into overtime.
Montgomery got the ball first in the overtime.  On second down, RJ Flores threw a ten yard touchdown pass to Marcus Johnson.  On the play Mt. Eden was called for a personal foul penalty, which moved the ball half the distance to the goal line.  Montgomery decided to go for two, which they got on a quarterback sneak by Flores.
It was Mt. Eden’s turn.  After two incompletions, a running play that lost yardage and back to back procedure penalties set up a 4th and goal at the 21.  The Mt. Eden quarterback scrambled around for what seemed like ten minutes, was almost back to midfield before throwing an incomplete pass to end the game.
That play ended a weekend in which the results weren’t too good for the rest of the leagues we cover, but was a golden weekend for the NBL, whose  teams swept all six of their games.


One of the other NBL teams to advance was Casa Grande, who actually trailed in its game with Miramonte before taking a 48-6 win.
After Miramonte took the lead, Casey Longaker scored the first of two straight touchdowns, on a five yard run, to take the lead for good.
Casa Grande shared the wealth with five different players scoring touchdowns and Sophomore Spencer Torkelson and Junior Andrew Floerke each rushing for over 90 yards, which was part of a 353 yard rushing night.
The win avenge,s in part, the loss to Miramonte in the 2013 NCS Division 2 championship game and after the 0-5 start, Casa Grande will try to even its record at .500, when they travel to Maria Carrillo for the second round game, next Saturday Night.
DIVISION OVERVIEW…There was a couple of double seeds who won on Saturday Night.  One affects Windsor, who will host No. 11 Pinole Valley on Saturday…Montgomery (5-6) goes into the eye of tiger, going to No. 1 Clayton Valley on Friday…If Montgomery could pull off what would be a shocking upset (at least shocking), they would meet the Casa Grande-Maria Carrillo winner in the semi-final.

In a more competitive game, a lot more, Cardinal Newman held off Novato 41-27.
This was a game that seemed like Cardinal Newman was going to let get away, but they didn’t let it happen.
After Novato took an early 6-0 lead, Cardinal Newman scored four straight touchdowns to take a 28-6 lead with 5:48 to go in the third quarter.  Sophomore quarterback Jordon Brookshire scored three of the four touchdowns.
But Novato didn’t go away, cutting the lead to 28-20 with 11:13 left in the fourth quarter.  After exchanging touchdowns, the game was put away on a four yard run by Craig Lucey with 2:16 left.
Brookshire and Lucey were part of big rushing night, combining for 501 yards and all six of the Cardinal Newman touchdowns.
Since a 1-2 start, Cardinal Newman has won seven of eight, the lone loss the overtime game to Rancho Cotate.
DIVISION OVERVIEW…Cardinal Newman and Rancho Cotate go on the road and play Friday…Analy has a home game on Saturday…This bracket went according to the seedings with the closest game the Cardinal Newman win over Novato.

DIVISION 4
SATURDAY RESULTS
No. 9 Moreau Catholic 26 No. 8 Fort Bragg 7
No. 7 McKinleyville 42 No. 10 El Molino 0
No. 6 Fortuna 50 No. 11 Piner 26
No. 4 San Marin 21 No. 13 Terra Linda 20
FRIDAY RESULTS
No. 5 Del Norte 56 No. 12 Lower Lake 0
No. 3 Justin-Siena 42 No. 14 Kelseyville 0
No. 2 Piedmont 52 No. 15 Kennedy (Richmond) 0
As  good of  a weekend as it was for the North Bay League, it was just that bad for this division.  All four local teams were eliminated and for the most part it wasn’t pretty.
Showing how fragile things can be.  Fort Bragg has been without its Junior quarterback Kaylor Sullivan since he injured his wrist in the first half of a win over Cloverdale two weeks ago.   There was a big difference in the offense without Sullivan, who passed for over 3,000 yards on the season.
Going into the Cloverdale game, they had scored at least 29 points in seven of eight games.  In the final ten quarters of the season without Sullivan, they scored 23.
The only scoring in the 26-7 loss to Moreau Catholic was a 99 yard interception return.
Fort Bragg’s season ends at 8-3 and a NCL I championship.
The news wasn’t much better for the other teams.
McKinleyville showed that No. 7 seed wasn’t a fluke, by scoring four first quarter touchdowns in a 42-0 win over El Molino.
El Molino does finish the season 6-5.  It is the second time since 2003 they have finished over .500.
After taking a 7-0 lead, Piner gave up 50 straight points, in a 50-26 loss to Fortuna.
It was the second straight season that Piner has gone to the NCS playoffs.  They finish 5-6.
DIVISION OVERVIEW…Except for Moreau Catholic’s win over Fort Bragg, the bracket went by the seedings.  There was only one close game.   That was No. 4 San Marin defeating No. 13 Terra Linda 21-20 in a game between Marin County League teams.

DIVISION 5
SATURDAY RESULTS
No. 4 Middletown 49 No. 13 Tomales 0
No. 9 St. Vincent 27 No. 8 Cloverdale 21
No. 2 St. Bernard Catholic 48 No. 15 Ferndale 14
No. 7 Berean Christian 15 No. 10 CSD Fremont 14
No. 11 St. Patrick/St. Vincent 14 No. 6 John Swett 6
FRIDAY RESULTS
No. 3 St. Helena 45 No. 14 South Fork 18
No. 5 Stellar Prep 34 No. 12 Valley Christian 20
Wyatt Hall scored three first quarter touchdowns as Middletown defeated Tomales 49-0.   Middletown is 7-3 on the season and will host Stellar Prep in the second round on Friday Night.
In the preview for what appeared to be the game of the weekend, before the Montgomery’s win unfolded, it was stated that a big part of Cloverdale-St. Vincent game would be the team’s running backs.
That turned out to be the case and in the end George Sammon was too much, as St. Vincent rallied for a 27-21 win.
Sammon rushed for 241 yards on thirty carries, both career highs, and scored three touchdowns.  Two of them were in a twenty three second span, which turned the game around.
The Cloverdale part of the running back duel, Luke Bernardi did his part, rushing for 136 yards.   He scored on a 42 yard run which gave the Eagles a 13-7 lead in the third quarter.  On the next series, the Cloverdale defense recovered a fumble and two plays later Mason Meier went 65 yards for a score to make it 21-7, with 1:34 left in the third.
That seemed to make things right after Cloverdale missed a couple of opportunities in the first half.  One was after they intercepted a pass to give them the ball at the St. Vincent 23, and they failed to score.
But the big play came in the second, when the Eagles completed a long pass play, that looked like a touchdown, when the receiver, untouched, dropped the ball and St. Vincent recovered the fumble.
The two touchdown spree for St. Vincent was sandwiched around a Cloverdale fumble. The saving grace for Cloverdale is St. Vincent failed on both extra points, so they still had a 21-19 lead.
That was taken care of on the next drive.  It didn’t start that way, when St. Vincent was called for two of the four penalites called in the game.  The flags gave them a 1st and 25 at their own 35.  Three plays later they had a first down, all the yards gained by Sammon  on two runs and a swing pass that went for 17 yards.  Five player later Dominic Pederson hit Sean Healy for a 25 yard touchdown and after a two point conversion St. Vincent had a 27-21 lead.
Cloverdale had one more frustrating moment.   They were lined up to punt on a fourth and ten with four minutes left, when they ran a fake double reverse that appeared to be headed for a big gain, but the runner stepped out of bounds a yard short.
Cloverdale never got the ball back, mainly because of Sammon who ran the ball six of the next seven plays.  The big run was a 4th and 3 in which Sammon gained 12 yards to put the game away.
Cloverdale ended the season which three straight losses to finish the season 6-5.
St. Vincent, who started the season with four losses, which included a 35-7 loss to Cloverdale, is now 7-4 on the season.
DIVISION OVERVIEW…St. Vincent will travel to meet defending champion and No. 1 seed Salesian on Saturday…The two NCL I teams left, St. Helena and Middletown, both will have home games on Friday.

OTHER SPORTS
It was NCS Championship Day for Soccer and the second round of the NCS Volleyball playoffs on Saturday.  We will have a recap on the “This and That” page on Monday or Tuesday.
My email address is jacpasquini@comcast.net
ncs playoff recap,sonoma county sports,sports news,ysn365.com
Share