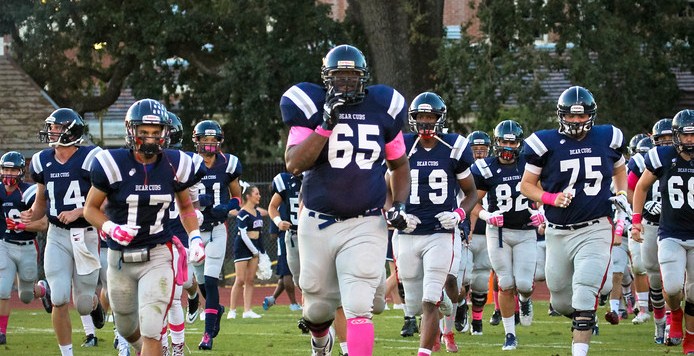 The conference season didn’t start out well for the SRJC football team.   It was penalty filled punt fest, but it did have going for it that these were two of the highest ranked teams in the state and there was  some suspense.
In the end, SRJC was on the disappointing end of a 24-21 decision to San Mateo in a game between the No. 3 and 4 teams in the state.
The two teams combined for 23 penalties, 18 punts and nine sacks.  In the first quarter alone the two teams combined for six of the punts and five of the penalties.
Most of the points were either scored or set up by big plays or good field position.
The field position part of the equation, for the most part, wasn’t in SRJC’s favor.  They had the ball sixteen times and started nine of their drives at the 20 or worse.     There was one drive they did get favorable field position, when they recovered a fumble at the San Mateo 27 midway through the second quarter.  They couldn’t take advantage of that with points.   After getting a first down, they missed a field goal.
That chance came with the score 7-7, which turned out to be the halftime score.
In a game like this you look back at missed opportunities and that was one of them.
There was another segment of the game they are looking back on.  Christian McAlvain had just hit Terrence Drew on a 71 yard touchdown pass on the second play of the second half to give the Bear Cubs a 14-7 lead.
Four minutes later they were behind.
Three plays after a good kickoff return gave them good field position; San Mateo tied the game on a 33 yard run by Sangu Fanua.  That was nearly half of Fanua’s 77 yard rushing yards for the game.
In a game with so many penalties, some are bigger than others.  On the tying extra point there was one of the big ones.  SRJC was called for a personal foul which was marked off on the kickoff.  With the favorable kicking position, San Mateo pulled off a successful onside kick.   Five plays later,  after converting a third and fifteen play, they took the lead for good on a 15 yard pass from Justin Burgess to Miles Willis.  The two touchdowns were a little less than three minutes apart.
That was part of a disastrous third quarter where six minutes later, after driving 75 yards, the Bear Cubs would be stopped on a fourth and goal from the five.
SRJC fell behind early in the fourth quarter 24-14 and the field position game cost them what turned out to be the winning field goal.  A punt backed up SRJC to its own nine yard line.   They didn’t get a first down and after they punted San Mateo took over at the SRJC 34.   After one first down came the field goal with 12 minutes left.  McAlvain, who threw for 220 yards, would throw his second touchdown pass with ten minutes left.   SRJC would have the ball three more times the rest of the way, but wouldn’t get a first down.
It is a frustrating loss in a game that they outgained San Mateo by 100 yards and didn’t have a turnover, while San Mateo had three.
It is the Bear Cubs first loss in six games and they can’t dwell on it too long.  Not in the conference they are in.  Next week they travel to San Francisco, who is also 5-1 on the season and ranked No. 7 in the state.  SRJC, San Mateo and San Francisco are three of four teams in theconference that are 5-1.  The other one is Diablo Valley, who SRJC ends the season with on the road.   All four teams are ranked in the top nine in the state.
Diablo Valley and San Francisco both won there league openers yesterday, beating teams with a combined record of 1-11.
CALISTOGA GETS FIRST WIN
You can’t blame Calistoga for thinking what could have been.
Coming off a NCL II/Bay League Co-Championship, this season took a hit on the opening kickoff of the season when Timmy Montanez separated his shoulder returning the opening kickoff.  Montanez was penciled in as the starting quarterback and after a 0-6 start he returned to that position and led the Wildcasts to a 23-12 win over Upper Lake.
Montanez rushed for 233 yards and also threw a touchdown pass.
It was actually a bright side for both teams.  When Upper Lake scored in the first quarter, it was its first points of the season.
My email address is jacpasquini@comcast.net